Boardwalk Empire is always a work of art 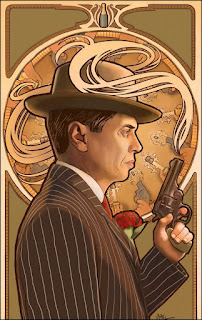 Although I didn't think I'd be used again this season because of my politician role earlier, I was pleasantly surprised by the cast-call to be a banker.  A slightly different hairstyle and a mustache... and VOILA!  My role was to escort a couple of bank customers across the floor as part of the ambiance that leads into a confrontational scene with two of the actors.

How To Get Health Insurance Without A…
Shen Men Piercing: Does it work for A…
Observation Point Zion: East Mesa To …
What to wear: outfit ideas for Christ…
Online Massage Therapy Courses, are y… 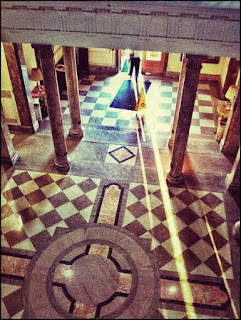 The location was in Tarrytown at a former college building called Butler Hall.  Originally it was established by a nun to educate women at the turn of the last century.  So it was a very historic location with a large domed ceiling, vintage columns and a checkered floor design being its most striking feature.  I could understand and appreciate the location scout's selection... it definitely works for a 1924 period scene.  Unfortunately, the Parking logistics for extras was baffling: we were told not to Park where the Crew parked and sent to park at the Set Location.  At the set location we were told that we could not park here either and should go back to the crew parking.  The two attendants eventually spoke to each other and neither could come to an agreement.  Luckily the campus police lady provided us with legal parking options. 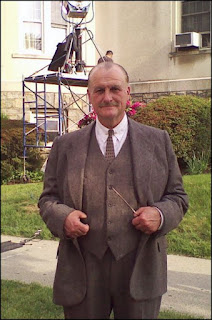 The day was rather hot and my mustache kept coming loose.  This called for a bit of extra pasting sessions with the makeup crew.  I was placed in one of the lobby's leather chairs, got re-mustached and told to stay indoors for a while to prevent my lip-sweat from solving the glue that would loosen the fake hair again.  While I was waiting, I was able to watch the scenes get set up more intently and I became fascinated as the actors replayed their roles for the closeups.  But my reverie was broken by an approaching large man in period clothing who looked me over and thinking that I was the "bank manger", introduced himself to me.
We shook hands vigorously and I watched him walk towards the director.  He was then redirected to be introduced to the actor portraying the real "bank manager" and given a seat across from me in one of the principal actors' chairs.  I realized that he was actually one of the principals himself and smiled at him across the room.  He looked askance -I didn't feel the love...
I wasn't picked to be in any of the other scenes for the rest of the day, but I did get to be in a couple of time-expanding conversations.  The first was with a fellow bg actor who had just joined SAG in April and was telling me that he got lucky by being selected for a two-week stint on a movie project that allowed him to make up for the $3000 union fee.  He was also a base player from Louisiana and we chatted for a long time about music theory and Ricky Minor's lead role on the Jay Leno show.
Pretty soon another unused elderly extra, looking very much like the artist Rene Magritte, was joining our conversation and shared his former bartender experiences with us... this naturally segued into the realms of philosophy, which pretty much ate up the rest of the day's "waiting-to-be-used" time.  We also took in the scenery of the Hudson River and the reflection of the setting sun.  Wrap time was inconsequential.


This post first appeared on Acting Strange, please read the originial post: here
People also like
How To Get Health Insurance Without A Job
Shen Men Piercing: Does it work for Anxiety and Depression?
Observation Point Zion: East Mesa To Observation Point Trail
What to wear: outfit ideas for Christmas & summer
Online Massage Therapy Courses, are you ready to start today?
Karen Wiesner: I Have Dreamed a Little Dream (Authors and Dream Inspiration), Part 2

Boardwalk Empire is always a work of art