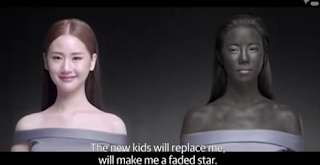 A Thai Skincare Company has been lambasted after their ad with racist overtones went viral. The advertisement which is for a skin-whitening pills and goes with the slogan “white makes you win” featured Cris Horwang – a 35-year-old actor, model, singer and dance teacher – saying the whiteness she achieved through beauty products had brought her fame.

Sobriety In The Time of Quarantine: T…
I was nervous about switching therapi…
أطعمة رائعة للحصول على بشرة صحية
Q&A with Phil Yates: Shaping the Futu…
How long does it take CBD to work? Ho…

“Before I got to this point, the competition was very high. If I stop taking care of myself, everything I have worked for, the whiteness I have invested in, may be lost,” she says.
The video shows another fair-skinned woman and Cris refers to her, saying: “The new kids will replace me, will make me a faded star.” Cris’s skin slowly turns black as the other model remains white.
“White makes you win,” the narrator says, adding that the product, labelled Snowz, includes glutathione, a compound taken from kiwi seeds that “helps you not return to black”.