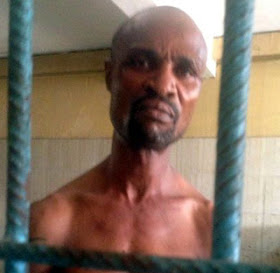 47-year-old Femi Kolajolu has been arrested by the Police for allegedly raping and impregnating his 15-year-old niece and attempting to rape his own daughter last November. Vanguard gathered that Femi had allegedly been raping his niece since 2013 and threatened her not to inform anyone, including her mother.

Kolajolu  who has been detained at the FESTAC Police Division, has however, denied the allegations, calling it false.

The niece, a Junior Secondary School III student of a public school in Lagos, narrated her story. She said:

“Last June, I realised I had missed my period but I did not know what caused it. It was after my mum took me to the hospital that we were told I was three-months pregnant.

“I intend to sit for my Junior School Certificate Examination, JSCE, next month. Since my father died last year, my uncle took everything he gave us. My mum was left with nothing to cater for the six of us.”

Femi's wife Ndidi, believes her Husband is guilty of the allegation labeled against him. She said:

“He almost raped our first child last November.” "He came around 3a.m., removed our 14-year-old daughter’s underwear and touched her breast. I woke up when my daughter screamed. We usually do not put off our light at bedtime, but at that moment it was off.

“We all ran to the sitting room to see who came in. As our last child bent, she saw legs behind the curtain. When we removed the curtain, I saw my husband standing naked.

“My daughter cried and rained curses on her father. When I told him I was going to report to the police, he said it will not take him five minutes to kill me.

“In December 2015, he said I and his five children (all girls) should not visit him again because he has another woman who has given him a son. Since last December, I am just seeing my husband today (Tuesday).

Despite the accusations by his Niece and wife, Kolajolu maintained his innocence. He said he didn't know anything about the pregnancy or rape.
He added:

“Even if my wife and I are at loggerheads, this is not the right way to solve it. I have never entered their room. “Why will I sleep with my niece or my own daughter?”