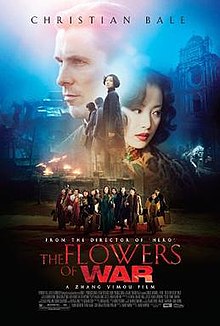 You can understand how the animosity between China and Japan came about after seeing this film. The movie is based on the true story and butchery of the Japanese invasion of Nanjing in 1937. Many thousands of Chinese were killed and raped.

The story centers around John Miller, who is kind of an American jerk. He shelters in a church with a group of School Girls and prostitutes. But he is forced to find his humanity when Japanese soldiers try to brutalize and rape the school girls, as the prostitutes hide in the cellar. A single brave surviving Chinese soldier manages to take out an entire Japanese regiment on his own to buy the people in the church some time. The prostitutes and Miller choose to sacrifice their lives to save these school girls from the Japanese.

This film will touch you to the core. It will haunt you but also inspire you. It really is one of the best movies you could see.

Flowers of War was nominated for a Golden Globe for Best Foreign Language Film and was the highest grossing film in China that year. It certainly earns five stars out of five.

The post Flowers of War appeared first on Our Movie Talk.

Subscribe to Our Movie Talk - Entertainment News From The Studi