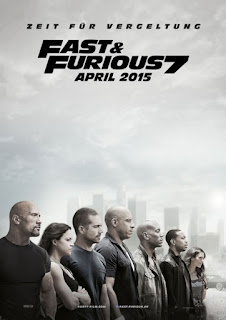 I don't want to sound mean or like an awful person or anything, but I believe the reason why this Film made all those money - and got a quite positive response - it's because of the dead of Paul Walker, and now I'm telling you why.
First of all, "Furious 7" is quite stupid, boring and predictable, it looks like a parody of the franchise and it doesn't even fall into the action category because it is so unreal it should be listed as science fiction. But let's move on.

Chris Morgan, the screenwriter, was probably high when he wrote the script. The plot, well once again there really isn't a plot, it is just something resembling a story of revenge that eventually ends in the most predictable way, is utterly ridiculous, full of holes and illogical developments that will make your head hurts if, like me, you're trying to make sense of it.

But it is an action flick right? Why am I even thinking the film should make sense? Unfortunately for the film, it doesn't even work as an action movie. There is plenty of action and I gotta admit that it's great action but was it necessary to make it so unreal? Vin Diesel and Jason Statham fight for 15 minutes maybe and they barely have a scratch. Not to mention the impossible car stunts. It does seem more like science fiction than action.

"Furious 7" biggest strength - and mostly like the only one - is the final tribute to Paul Walker. I'm not talking only about the scenes from the old films, but about that last scene, when Toretto keeps driving and Brian turns left, a turn toward the unknown. All the film should have had this kind of depth.

Why Friday The 13th Will Be Your Luck…
15% of Swans on River Avon are Fake s…
Alibaba Plans to Tokezine it’s New Fi…
Testing 1,2,3. Checking in to see if …
Beautiful Celebrity Couple Pics