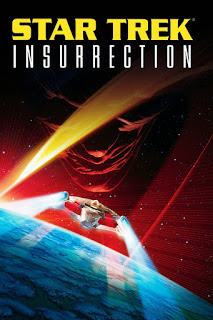 When the crew of the Enterprise learn of a Federation conspiracy against the inhabitants of a unique planet, Captain Picard (Patrick Stewart) begins an open rebellion. 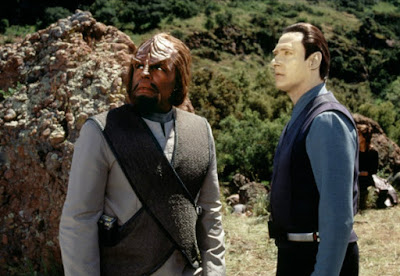 If you have read the plot, it's like you have seen the movie already. It describes exactly what happens in the whole film. Just add Mr. Worf going through puberty again, LaForge with the ability to see, and a psychological insight on Data and you're done. Oops, I almost forgot Beverly and her storyline involving her boobs firming up, and Data's saying dumb things because he's a robot. Also the amount of screen time Data has and his constant obsession with becoming more human is getting very annoying.
Furthermore, the story is all over the place and it feels like it's being made up as it goes along. From the opening scene things are quite confused, and I really didn't understand why I should have cared at all about what was going on, or the characters.
Despite its boringness and therefore the difficulty to follow the story, I manages to notice plot holes. There are so many plot hole in this film, the Enterprise could fly through.
However, there is some good. Captain Picard falls in love with Anij, a Ba'ku woman. While it's becoming a little clichéd to have the captain having a romance with the first good-looking supporting character that comes along *coughs* Kirk in San Francisco *coughs*, and even though it could have been better explored and developed, the relationship seems quite genuine - George Lucas should have taken notes.
The special effects are good, but nothing special, the makeup is splendid, especially F. Murray Abraham's alien face, and the soundtrack is okay, but all that karaoke is a big no. The acting is nothing special as always: F. Murray does the best he could do with such a script, and Patrick Stewart finally puts some depth in his portrayal of Captain Picard.

It’s Me – Chapter 12
Top 10 Air Fryers - Tips to Help You …
5 SEO WordPress Plugins
Get Managed IT Services in Plano Toda…
The Punisher: A Timeless Character