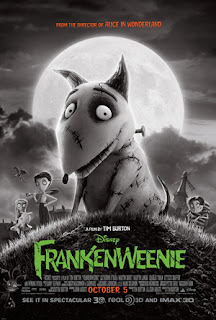 I am a Tim Burton fan, I really am, but I fail to see why others claim this to be one of his best - if not the best - works. Actually I don't really see anything special about it. Why is that? Because "Frankenweenie" essentially is just an average Tim Burton movie that doesn't have that something to stand out from the others.

Even if you haven't seen Burton's 1984 short on which the film is based on, I'm positive the story will sound familiar to anyone because it is an adaptation of Mary Shelley's classic "Frankenstein", only having a boy resurrecting his dog instead of a scientist resurrecting a dead body. And it's a great way to go if you want to introduce a classic to kids. But then Disney stepped in, and ruined everything. 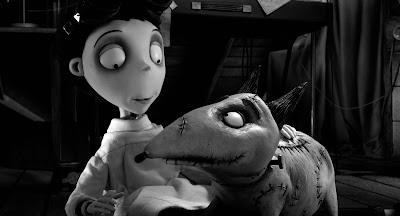 I am not saying Disney can't make good films, but I just don't think Disney and horror make a great pair. They are more family comedy oriented that horror oriented, and the story - especially the ending - suffered from that. Who is to be blamed? Tim Burton, of course. He should have never signed with Disney in the first place.

The film also suffers from the lack of character development, not to mention that it is supposed to be a comedy but there is little to laugh at as the humour is quite mild.

However, despite everything, I have to admit that the story is quite well paced and has some genuine suspense that keeps you watching the film. Some other positive notes are the use of black and white instead of colours, the stop-motion animation, obviously, and the voice cast who overall does a good job.

How to Make Number 13 to Your Lucky N…
Exhibit D: Lipstick and rifles--Ukra…
8 Places to Drink Coffee in KC that …
Alibaba Plans to Tokezine it’s New Fi…
Magic Flying Carpet – Legend or Fact?