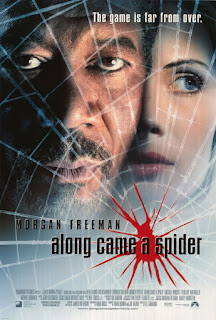 Former detective and psychologist Alex Cross (Morgan Freeman) is drawn back to work when the daughter (Mika Boorem) of a senator (Michael Moriarty) is kidnapped and the kidnapper (Michael Wincott) seems to want to deal with Cross personally.

A while ago I watched "Alex Cross" and made me wonder how the original film with Morgan Freeman was like. So after finding a copy of it, I decided to give it a try, not letting other people and critics reviews bother me. I should have probably listen to that because "Along Came a Spider" is indeed a terrible thriller. 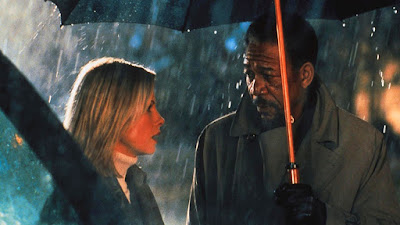 Even though it's nothing really new, the storyline is interesting and has quite a potential, and it would have turned out pretty well if it wasn't for the filmmakers constant attempts at making a film good as "Seven" or "The Usual Suspects". A simple story able to build up the tension until the end would have actually been great for this film. Instead they try to surprise us with so many not-so-smart plot twists. Sure, there's a big twist at the end, but I saw it coming.

I still haven't read the novel so I don't know who's fault is it, but another huge problem comes with the characters. There is no character development whatsoever, and I feel like the relationships between the characters should have been explored more. They are so shallow they barely makes any sense. A psychological examination would have really helped, even if that would have meant a longer running time.

The direction is awful, which seems pretty obvious considering Lee Tamahori directed it, but somehow the action scenes are quite good.

Then there is the wrong casting of Morgan Freeman. He is a good actor, and I really like him, but I believe the only reason he was cast is "Seven". However, Mr. Freeman does a really good job, excellent considering the poor material he had to work with. Monica Potter is, well, her acting abilities leave much to be desired, but at least Michael Wincott is decent.

Will Libra be a security under the la…
Why Buy A Novelty Diploma?
How to Find Your Best Small Business …
OPINION - Gerson and Tumulty 8/16/201…