Tribeca Review: HERE ALONE is an Unremarkable Contribution to the Zombie Trend 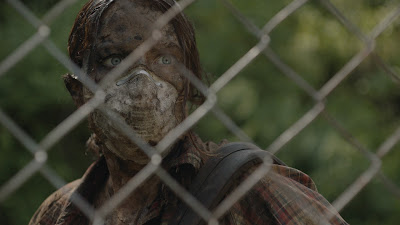 Often times when we talk about final girls in the horror genre, we revere them as heroic, smart, and resilient. Let's be honest: sometimes they are (10 Cloverfield Lane, Aliens), but other times they are just remarkably lucky (Frozen, Halloween). In HERE ALONE, she's the former. But that is the only thing worth noting in an otherwise spectacularly mediocre film.
Premiering at the 2016 Tribeca Film Festival, HERE ALONE follows Ann, a woman (Lucy Walters) trapped in the middle of a bloody apocalypse, alone, with just a surgical mask, homemade weapons and quick reflexes to sustain her. Suffering flashbacks of her life as a mother and wife, Ann navigates a bleak world on her own, until she encounters a mysterious man and his daughter, who may or may not be coming in peace.

I partly blame AMC's The Walking Dead for raising the zombieapocalypse bar so high that so many other knockoffs pale in comparison. While HERE ALONE has an intriguing female heroine, there isn't much left to the story to keep your attention. It rests almost exclusively on the thin emotional portrayal that her solitude has left her desperate for human connection, yet suspicious of it just the same. It's just generic. There's no complex, layered characterization (or plot, for that matter). The effects leave much to be desired (undoubtedly signs of the minimal film budget), and the scare factor is pretty nil.  Director Rod Blackhurst and screenwriter David Ebeltoft should have spent more time telling the story than relying solely on the setting and atmosphere. It's unremarkable, and doesn't even have a clever twist at the end to make it all worth it.

How To Become God's Battle Axe
Why Lawyers Use Legal Pads?
It’s Me – Chapter 12
Things You Should Stop Worrying About…
WordPress Website Customization: Best…

Tribeca Review: HERE ALONE is an Unremarkable Contribution to the Zombie Trend