Movie Review: On the Border 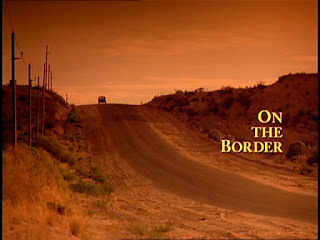 Vitalik’s “Verses” Addressing Crypto-…
Royal Palace Rugs
Long Island Sounds August 2019
Sapphic Retellings
Golden Week Deep Discounts for Steam …
Jake meets a suspicious hitchhiker girl Kristin (Camilla Overbye Roos) on the road and offers her a temporary housing. Violent criminal Barry Montana (Bryan Brown) forced her to seduce Jake as he also plans to rob the bank. Jake's old 'friend' Sykes (Bentley Mitchum, Robert's grandson) is released from the prison and arrives to town to further mess things up. Can you guess what he is up to?
The film offers 1990s direct to video B-movie goodness. It is a noirish thriller with some steamy erotic scenes. It is a slightly better Casper Van Dien film if you are willing to forget the plot holes and some recycled script ideas. The border town setting offers some nice cinematography. Nothing is as seems and just about everyone wants the money. The ending is hilariously over the top with double-crosses and double-double-crosses! The femme fatales are ambiguous and it is difficult to see how it will end. Van Dien is wooden but still has more facial expressions than Kristen Stewart. Actually he fits the role as a bored guard who is stuck in the desert town. Bryan Brown chews the scenery with some weird scenes, that is a dangerous way to answer a phone:
Rating:

Guess Who – Superstar Has Fall Out With Director

Movie Review: On the Border