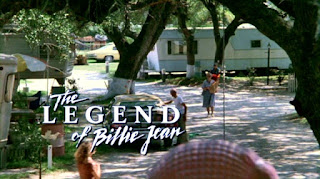 High school girl Billie Jean (Helen Slater, not related to Christian) and her little brother Binx (Christian Slater, not related to Helen) live with their friends in trailer park. Billie and Binx are enjoying a hot summer day on a lake. Beautiful Billie gains unwanted attraction. Bunch of dude-bros harass them and steal Binx's scooter.

How To Learn Cryptography as a Progra…
Uncanny X-Men #309 Review: The Sheer …
Antique Rug Bazaar Orientalist Painti…
Crazy As A Fox Pest Control Rochester…
QUILTsocial Giveaway 277: Intaglio 12…
Billie Jean and her friends friends Ophelia (Martha Gehman) and Putter (Yeardley Smith) go to police station. Detective Ringwald (Peter Coyote) is friendly but not very useful. He suggests waiting to see if the scooter is returned. Binx finds the scooter but it is badly damaged and Binx is beaten up. Billie Jean goes to demand $608 repair costs from Hubie (Barry Tubb). Hubie's dad Mr. Pyatt (Richard Bradford) promises to pay but then tries to rape her. Binx and Ophelia come to see what takes Billie Jean so long. Binx finds Mr. Pyatt's gun and accidentally shoots him on the shoulder. Mr. Pyatt and Hubie frame Billie Jean and her friends for robbery.
The teens grab their belongings and hit the road. Billie Jean and Ophelia are the brains of the group, Binx is the loose cannon and the youngest Putter is the childish one. As they are now famous outlaws and rebels they find out that they Billie Jean is turning into teen idol.
Mr. Pyatt starts making money selling her swimsuit pictures. Mr. Pyatt and Detective Ringwald make a deal with Billie Jean to pay for the scooter but Mr. Pyatt betrays her again. The flashy escape only makes her more idolized. Billie Jean meets an eccentric rich kid Lloyd Muldaur (Keith Gordon, known for "Christine") who wants to interview her. After seeing the movie "Saint Joan" in television, Billie Jean cuts her hair short like Jeanne D'Arc and records 'Fair is Fair' statement demanding justice.
Lloyd comes along as a 'hostage.' Ringwald believes that Lloyd is safe but Lloyd's attorney father (Dean Stockwell) wants to play hardball. Billie Jean becomes even more popular among teens as a symbol of wronged youth but she also attracts some bounty hunters and the ring around the kids tightens. Will the law catch them and can Ringwald prevent them from getting hurt?
This is an essential 1980s teen movie with awesome 1980s pop soundtrack. It is cool and cheesy 1980s fun with cool heroine and it has young Christian Slater in dress and Texan Lisa Simpson. Although the story has many cliches of teen movies (and plot holes) it has quite feminist tone and message about just treatment of youth. Billie Jean is a strong and independent female character. She is resourceful and stands up against sexual oppression and injustice. Billie Jean also takes shots at novelty industry and media that exploits current issues and contemporary cult figures (it kind of foreshadows "Natural Born Killers.") Also the story turns the tables on common tropes about trailer trash, with the trailer park kids being the good guys and demanding to be treated fairly. Despite the themes it never gets too gloomy and it has the 1980's feel-good atmosphere.
Here's Pat Benatar performing the theme song Invincible:
Part of The 2016 Movie Watching Challenge (#27. Movie aimed at teens or young adults)
Rating:

Tell it to the bees es un libro encantador