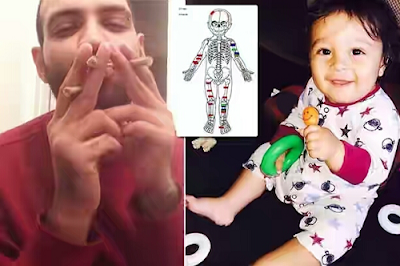 A first time mum, 22 year old  Ronnie Tayler-Morrison woke up in the middle of the night to her  boyfriend, 27 year old Hardeep Hunjan, 27 screaming that her son had fallen out of his cot.
The child was rushed to the hospital but he could not be saved.
However, her boyfriend Hardeep Hunjan, has been found guilty of battering the 13-month-old baby to death during a drink and drugs binge.  Noah was found dead after suffering 15 fractures to his body, including a 6in wound across his skull. According to medical and Police reports, he beat little Noah Serra-Morrison so severely that his body looked like a car crash victim.

The sickening assault occurred  at the flat where he lived with the child and his mum at  Luton, Bedfordshire.

The jury acquitted Tayler-Morrison of murder but found her guilty of causing or allowing the death of a child and cruelty to a person under 16. She told the jury on the night her son died that she had passed out and came around after her boyfriend woke her up telling her Noah had fallen out of his cot.

Hunjan was convicted of cruelty to a person under 16 and found guilty of murder.

They will be sentenced today after a six-week trial at Luton Crown Court.