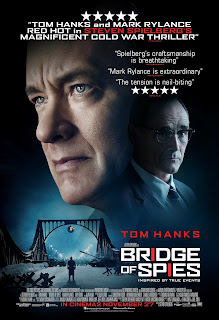 In 1957 during Cold war, minutes after finishing reading a secret message, Rudolf Abel is arrested by FBI men, at his hotel room in Brooklyn, on the charge of being a Soviet spy. Although Abel manages to destroy the actual message, FBI uses circumstantial evidence to arrest him. But he does not confess of spying and opts for a trial. America is forced to oblige to look good on international scene and not aggravate political situation with Russia. Hence to ensure a 'fair trail' James Donovan, an insurance lawyer, is appointed to defend Abel. Citizens, politicos as well as James Donovan’s family believes that he will not only help the State in establishing charges against Abel but also lose on purpose. Sadly for James Donovan he stands by the Constitution believing that no man can be held under arrest without a search warrant and proper proofs. He fights the case stoically but ends up losing it. As a final resort to save Abel’s life, Donovan succeeds in convincing the Judge in not sentencing him to death, instead keeping Abel as ‘insurance’ which can be used in case any American spy gets caught by Soviets later. As a result, Abel gets 30 years of imprisonment and Donovan (and his family) is left to face national hostility for being an anti-hero with a soft corner for a Russian spy.
Around same time an American war pilot, Francis Powers, is assigned to fly over Russian territory as a part of a covert operation and record sensitive information for the US. While on this mission his plane is shot down by the Soviets and he is caught alive for interrogation. When an unofficial message in which Soviets express desire to trade Abel for Powers reaches Donovan, he agrees to step in as a negotiator. This deal has to take place in East Berlin where the exchange can happen smoothly without both sides having to openly acknowledge their respective spies. Days before Donovan leaves for the proposed destination, an American economics graduate student, Frederic Pryor is arrested by border guards as he attempts to immigrate his German girlfriend from East Berlin to the other side of Berlin Wall. Stamped with charges of spying, Frederic’s future looks bleak.
Donovan takes a perilous ride into East Berlin to meet with Ivan Schischkin , who claims to be Second Secretary at the Embassy but in reality is KGB’s chief in Western Europe, as Donovan in made to understand later. It is only after this meeting that Donvan realizes the gravity of present situation and precariousness of his own role in it. Having come to know about Pryor’s unfortunate arrest, Donovan sees an opportunity of getting both, Pryor as well as Powers freed. However America is less willing to pursue Pryor case deeming it to be less important, instead pushing Donovan into negotiating the release of Powers alone. Angered and frustrated at playing second fiddle to CIA and KGB, Donovan takes over the reins and negotiates for simultaneous release of these two men in exchange of Abel.  Although USSR succumbs, they get to have the last word by fixing two different locations namely Glienicke Bridge and Checkpoint Charlie for the proposed release.
While Abel, Donovan and rest of the party get ready for the exchange at Glienicke Bridge there is no movement at Checkpoint Charlie. Wanting to get over with the whole deal both sides force Donovan into rushing it but he refuses to oblige as he fears Pryor will not be freed once Soviets get hold of Abel. Out of respect for Donovan, Abel agrees to wait till they get a word about Pryor. Soon Wolfgang Vogel, a lawyer who had tried to double cross Donovan previously, drives up to Checkpoint Charlie with Pryor. As Abel departs to the other side of the bridge with an uncertainty about his future in his homeland he informs Donovan that he has arranged for a gift to reach him. Donovan feels sad about not having thought of getting a gift for Abel in return, to which Abel reassures him that a second chance at life is Donovan’s gift to him! Back home while the whole nation including his family watches in awe the news of the recent exchange and learns about Donovan’s pivotal role in it an exhausted Donovan sleeps peacefully, happy about saving three innocent lives and playing the part of a Stoikiy muzhik i.e standing man to perfection during tough times.
James Donovan, played by Tom Hanks, and Rudolf Abel, played by Mark Rylance, are patriots trapped in a tricky situation yet willing to serve their respective countries to the best of their abilities and honor. It is the sense of duty which binds them and in turn elevates them in each other's eyes. Based on true people and their true stories, Bridge of Spies directed by Steven Spielberg is a fine specimen of how men of integrity behave even in worse situations. Despite being a political drama it banks so much on the central characters of Donovan and Abel that it makes politics look like a mere backdrop. As an audience you no longer care about the countries and their internal turmoil; all you want to know is what happens to the prisoners and Donovan.
Not much needs to be said about acting department when you have actors capable of doing their job well. Tom Hanks is impeccable as James Donovan. Mark Rylance lends him a competent support in taking this film to another level. The interactions between these two characters convey their growing respect and admiration for each other and are beautifully handled. Laced with humour, dotted with excellent performances and packed with a great script this film is a must watch for all those who love war time stories of men and women who stood their ground for that what was right and thus had to be done.