When Bollywood critics (and some of my close friends) scoff about Bollywood not being as good as Hollywood, something within me churns and makes me restless. Though Bollywood could be a haven for innumerable ‘masala’ films but it has consistently given movie buffs like me some excellent movies too. Some thing to die (and write blogs) for!
Here’s presenting Part –I of my personal 100(and more) crores club Bollywood movies list.
(P.S : No specific sequence is given to the movies here. In order to keep the list short, I have considered only those movies which released after year 2000).

This one should go down in the history of Bollywood as the harbinger of ‘multiplex type - small budget movies’. It was after this movie that Indian audiences saw a surge of ‘halka-fulka’ entertainers which could pull decent crowds without having any big stars in the ensemble.
A story of two friends and their musical triumph which goes through some beautiful songs, witty references to the legendary Sholay, healthy dose of double meaning jokes, bang-on performances (at least by the important actors)  and ends with a foot-tapping tribute to R.D.Burman. Each time I hear its songs, they bring a smile on my face not just due to their soothing melody but also because of the fact that this happens to be the first ever movie that I watched in a multiplex!
Don’t believe me?Come and see its ticket which I have treasured till date.
Directed by : Sujoy Ghosh
Year : 2003
Cast : Sanjay Suri, Juhi Chawla, Rahul Bose & others.
Genre : Comedy
IMDb rating : 7.3/10

We do not make many mainstream Bollywood movies that focus on children or their issues without sounding childish. This one is a rare gem. Right from the opening credits where each child protagonist is introduced with his nick-name till the ending credits (featuring Ranbir Kapoor) this movie is a never-to-be- missed children’s film.
When a poor, homeless boy’s (Fatka) pet dog (Bheedu) faces the threat of being put to death by municipality’s dog cell, children of Chandan Nagar housing society decide to protest against the politician who has passed that order. The antics of these children, as they take on political bigwigs, though out-of-this-world are brimming with innocence at the same time. If ever one forgets what a determined mind with honest intentions can achieve, this one shall serve as a quick reminder.
Directed by : Vikas Bahl, Nitesh Tiwari
Year : 2011
Cast : Too many kids!
Genre : Comedy
IMDb rating : 7.5/10
3. 3 Deewarein

I simply love interwoven screenplays. One story flowing into another and then another and yet another. Apart from making it more fun to watch a movie it also adds immensely to the whole experience. Another advantage is that this leads to such classic confusion about the story that the next time you sit down to watch the same movie you see it in a new light because you can hardly recollect what you saw last time!
This one directed by Nagesh Kukunoor is a fantastic blend of three main stories each of its three protagonist’s and how they flow into a fourth one belonging to the female lead, Juni Chawla. Sharp editing, excellent handling (look out for the different camera angles indicating how the stories are flowing into one another) and superb performances make this one a must watch in the suspense/drama category.
Directed by: Nagesh Kukunoor
Year : 2003
Cast : Naseeruddin Shah, Nagesh Kukunoor, Juni Chawla and Jackie Shroff.
Genre : Crime, drama
IMDb rating : 7.9/10 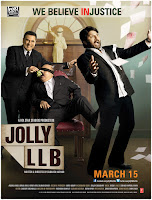 Many years back, after watching Damini i was convinced that courtroom drama could only be a high voltage, “tareekh pe tareekh” and “dhai kilo ka haath” experience. My notions changed after watching Jolly LLB.
It is a treat to watch Saurabh Shukla as the hapless judge, Boman Irani as a senior lawyer, and last but not the least, Arshad Warsi as Jolly LLB as they bring alive this slapstick courtroom drama. And if you feel that the movie bears resemblance to a particular super star’s hit and run case it could just be a coincidence!
Directed by: Subhash Kapoor
Year : 2013
Cast : As stated above.
Genre : Courtroom drama, comedy
IMDb rating : 7.2/10

Another one in children’s film category, this one is based on Ruskin Bond’s novella by the same name. Book adaptations are very difficult because they need to match popular imagination and bring it to life on-screen. But when you have a competent director like Vishal Bhardwaj helming the project and a brilliant actor like Pankaj Kapoor acting in it then nothing can fall short of brilliant!
A small girl gets an attractive blue coloured umbrella from one of the tourist families visiting her mountainous home-town. As that umbrella and this girl become the talk of the town, a tea shop owner becomes jealous because he believes that the focus of the town has now shifted from his shop to the girl’s umbrella. One fateful day the umbrella goes missing and the whole town suspects this man of stealing it. As events unfold and story proceeds, the small girl through example teaches this aging fool to look above jealousy and love people and not their possessions.
Directed by: Vishal Bhardwaj
Year : 2005
Cast : Pankaj Kapur, Shreya Sharma, Deepak Dobriyal
Genre : Comedy, drama
IMDb rating : 7.7/10
[Part-2 coming soon....]