"In real life, I'm an inventor... well a struggling inventor. You wouldn't believe how hard it is to make a living creating things these days" 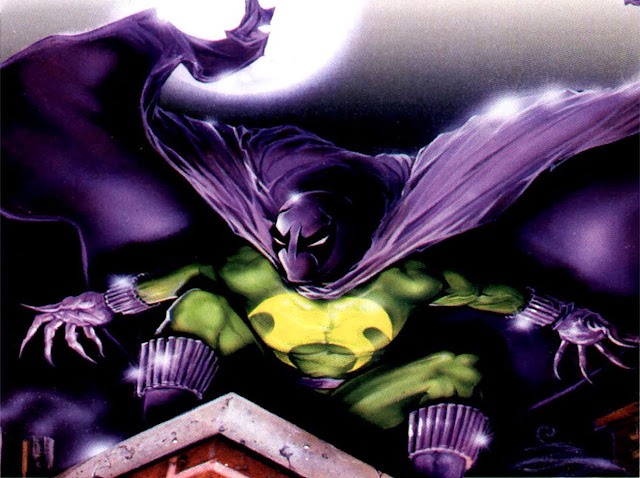 Hobie Brown was born in The Bronx and worked as a window washer during his teenage years. He grew up angry at injustices he saw, feeling as if he could do nothing about them. His future wife Mindy was one of the few people that could calm him. She convinced him to turn the inventions he designed into his boss. His boss laughed in his face, tossed the designs aside and told him to get back to work on the windows. Hobie quit the job in that moment.

He started designing a suit full of gadgets that would allow him to fight crime as a superhero. However, he had eight other siblings to take care of. Instead he decided to design a suit that would allow him to steal objects and return them later as Hobie to collect the reward and be known as a hero. Steal from the rich and sell back to the rich. He named himself The Prowler.

Hobie attempted to commit a minor robbery and was stopped by Spider-Man. However he managed to escape using one of his sleeping gas pellets. Prowler's second crime was to rob the payroll office for the Daily Bugle. He assumed this would give hims some quick publicity and allow him to rise up the ranks as a criminal quicker. During the crime Peter Parker walked into the office. Peter called for J. Jonah Jameson for help. Then he fell out of a window on purpose so he could change into Spider-Man. Hobie thinking he had killed someone fled to the rough where he was stopped by Spider-Man.

As the two fought for the second time Hobie was unmasked. Eventually Spider-Man won but let Hobie leave when he got a closer look realized they were the same age, opposed to Spider-Man's usual midlife crisis villains. He told Hobie not to throw his life away over money. In return Hobie dressed up as Spider-Man and showed up at Peter's house to convince Peter's family he wasn't Spider-Man.

When George Stacy died it was heavily implied that Spider-Man did it. Hobie attacked Spider-Man disgusted that he would go so far after telling Hobie not to throw his life away. Fighting with pure rage about being misled Hobie almost managed to defeat Spider-Man but he wasn't thinking clearly and injured himself. Spider-Man took a knocked out Hobie to the hospital. This is when Hobie chose to leave both the villain and hero games behind.

Hobie got a job as a construction worker and finally married Mindy. However, he still committed robberies occasionally when the family was in a financial rough spot or he wanted a thrill. He also joined the big brother program and was partnered up with Manny Lopez. Manny ended up murdered with both Hobie and the police believing Hector Ayala, who was really the hero The White Tiger, to be behind the murder. Hobie defeated Hector and contemplated killing him but learned Manny actually died for refusing to join a gang.

Wanting to become a full time hero he tried to join The Defenders team. They threw him into the harbor for his trouble. This time Hobie decided he was going to retire and stay retired. His Prowler suit and gear were stolen by a burglar who was committing crimes for Bella Donna, a fashion criminal. Spider-Man tried to keep Hobie from going after the thief himself because the other thief had committed a murder to hide his identity. Peter later returned the gear to Hobie.

Hobie was watching the news one day and saw a clip about a criminal that was called The Nightcreeper who was committing crimes in a similar way with similar equipment. The Nightcreeper was also being investigated for committing a murder. Without telling Mindy, who assumed he was done for real this time, he put on The Prowler costume and attacked The Nightcreeper. He noticed that the Nightcreeper had actually stolen some of his old gear and designed a new suit using it.

He came to believe that Nightcreeper was innocent because of the way he fought, using non lethal attacks, mostly defending and avoiding hurting Hobie. He agreed to help Nightcreeper catch the real murder. When Hobie got home, Mindy was pissed off that he would start going out as The Prowler again without telling her. When he went to work the company was being taken over by a man named Adrian Toomes, better known as The Vulture.

When he next met with Nightcreeper they took on a gang. However he saw Nightcreeper didn't care if civilians were caught between the two sides. He chose to grab Nightcreeper and retreat to save civilians. Angry about this Nightcreeper ran away, not wanting Hobie's help anymore. Hobie went to train and talk things over with Abe. He came to the conclusion that Nightcreeper was guilty and told him it was best to turn himself in.

However he later learned Nightcreerper had been taken out by Vulture. Hobie then used his new pneumatic laser system to listen into conversations in Adrian Toomes office. He learned of his dual identity as The Vulture and confronted him. At this time they got into a fight and Vulture managed to fly away despite being injured. Mindy also decided to leave him since he couldn't retire for good. 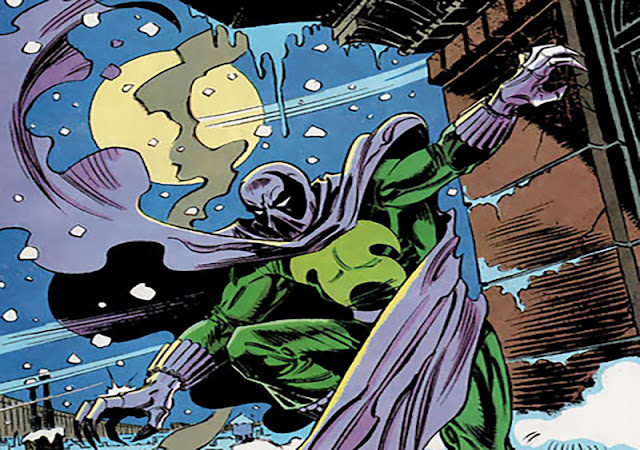 Mindy had taken an accounting job for Transcorp New York's California office. Eventually the company was caught committing crimes and they chose to frame Mindy for it. Hobie attempted to hide the evidence but that wasn't working. So he put the suit back on and tracked down Raul Chambers, a criminal known as Black Fox that helped to frame Mindy. Spider-Man was unaware of Raul's secret identity and assumed Hobie had become a villain again, because let's face it he goes back and forth. He informed what had happened and Spider-Man helped capture Raul and prove Mindy's innocence. They managed to reconcile after this with Mindy deciding this was who Hobie is and it was partially her fault for telling him to invent more things.

Once again attempting to remain retired Hobie suited up again to prove that Spider-Man was innocent of murder. Then his inventions were stolen by Justin Hammer who used them to give his goons an upgrade. Hobie went to retrieve the designs and was encountered with people using his inventions against him. Sine he built the inventions he was able to easily disable them and reclaim all of his designs.

Hobie was next hired by The Outsiders (a hero team made of reformed villains that charged for their services) to steal a Symkarian nuclear device from a villain in England. They hired him once again to help save the daughter of a Canadian politician that had been kidnapped. Eventually they offered him membership to the team. To do so he had to complete the initiation which involved fighting against his older brother be who was a member of the Sons of Tiger(three martial arts students who fought against gangs in their neighborhood). However the team soon disbanded.

With the hero income gone and not wanting to go back to work, he worked with former team member Rocket Racer to design The Great Game. The two would stage a fight with each other and split the profits from the bets. However a villain known as El Toro Negro interfered hoping to rob the event. This left Hobie paralyzed from the waist down. While he was paralyzed, someone once again stole his Prowler equipment (just as common as his retirements). Spider-Man was able to track it down before it was used for anything.

During this time Spider-Man was being framed for murder and took up the identity of The Hornet. Hobie provided Peter with the jetpack and other equipment necessary. Eventually it was revealed that he was only paralyzed due to a mental block. Hobie felt he failed a lot: as a villain, as a hero, as a husband, as a brother, as a mentor to Manny, as an inventor, being a thief but always having his suit stolen. After some counseling he regained use of his legs and went back to being The Prowler.

It didn't last long. Civil War had broken out in the Marvel Universe. Hobie was captured because he refused to register. He shouldn't have had to register anyway considering he isn't a superhuman. Just another way the law was unfair. He was already planning his escape but Carol Danvers helped him speed it up.

He was next seen attending the wake for fallen villain Stilt-Man. Hobie had a little too much to drink and couldn't hold it together. Mainly because he connected with Stilt-Man because they could both be considered failed villains and inventors. Eventually fights broke out and Spider-Man and Puma were called to break it up, but not before Hobie could knockout The Cat Burglar who had confessed to stealing his suit and working for Bella Donna. Nobody was arrested because it was a wake. Spider-Man and Puma took Hobie home so he didn't embarrass himself. That was actually a good thing because The Punisher had poisoned the food and drinks during the fight as well as bombed the bar to ensure there were no survivors. Nobody died but everyone had third degree burns and had their stomachs pumped because Punisher isn't even good at punishing.

Later with Parker Industries becoming world wide Hobie put theft behind him, completely this time to work as Peter Parker's chief of security. He was chosen because who knows how to prevent thefts better than a thief? It also pays well and he gets to put his inventions to good use finally. He also dresses as Spider-Man sometimes to keep the villains in New York guessing. He was most recently seen once again in his Prowler costume working with SHIELD and Peter to take down Zodiac.

Abilities and Equipment
You can hear Darrell on the CP Time and Powerbomb Jutsu podcasts. He also plays classic arcade games on The Cabinet
Follow @OriginalKingD