BTS - Lost
Every Song from WINGS is very good but Lost is the song that I listen to the most. I just love the Pop and Hip hop inspired song that's about not knowing where you're going or coming. I also love the fact that its a song with just the singers of BTS. This songs resonates with me heavily besides it being a great track and that's why it made it to the list.


Crush - Fall
Can we just stop and appreciate this man's work? Not only was the Wonderlust EP good, review here, but Fall is just amazing. I said that Crush's best songs are his ballad songs and I was right. Fall is a songs after a heartbreak that can't be forget and its just in time for the Fall season. So many feelings all at once. Why Crush? I can't stop playing this song as well as feeling his emotions brush over my ears.


Baek Yerin - Something To Prove
Baek Yerin uploaded a cover of a song to her Soundcloud that I have been enjoying so much. The name of the song is Something To Prove yet I don't know the original artist. The song is sung in English and I love her voice here so much. The tenderness of the beat blends so well with her soft and melodic voice. The lyrics are pretty cool but the spotlight is here voice. I love her voice so much. But the cover is definitely one that you should check out.


B-Free - James Bond
I've been obsessed with this song since the Free From Seoul 2 EP came out this month. ITs the only turn up like song on the joint as B Free was taking a serious tone with the other songs. James Bond is a fun song that references the life style of James Bond to B-Free's own lifestyle. I saw those pills in the video. DON'T DO PILLS PEOPLE. But the song is really cool with the lyrics and the rock influence is great.


Jay Park - Only One/Forever/I Got This
The last time I had 3 songs as one entry was last year in August when Girls Generation released Lion Heart and Wonder Girls had released Reboot. Not since then has 3 songs from one album made it on the list. I love the beat for Only One has the lyrics. Raz Simone may have my favorite feature on the album as I said in my review. The beat for Forever with the chopping of Jay's voice during the chorus is just amazing. I Got This is one of the more lyrical rap songs on the joint with some of my favorite lines from the album. I enjoyed the more serious tone that this song took. All 3 songs as well as the album have tons of replay (no pun intended) and the whole album almost made it on the list.


Hyolyn - Love Like This fr Dok2
I was excited for this pre-release track because not only is Hyolyn back but she has the help of Dok2. The only other track with these two is Message from Hyolyn's first album Love&Hate. Message was one of my favorite songs from the album. This song did not disappoint. Hyolyn's singing is not only on point but her emotions can be felt in her voice. This fits well with the production of the track. Dok2's lyrics were on point as well as he's the male equivalent to the situation. This track is everything we all wanted from Hyolyn and some. If the rest of her EP and her next title track with Jay Park is anything like this than I am even more excited. I have this song on repeat.

September Leftovers
There weren't a lot of songs released in September that I enjoyed heavily so I decided to take the 4 that I did and save them for this month.


Swings - Your Soul
I've been telling people for years that you have to treat your soul with the same respect you do with your body and mental. This song is an example of why we need to do that. On top of the great beat created by Gray, Swings singing and rapping is in sync and just hits me hard. I love the way this song came out because it has a good message while being extremely repeatable.


Jay Park - Me Like Yuh/Aquaman
I love these songs so much and I think I;ve said that before up top. This is the first time that 5 songs from 1 artist has shown up on one list. This can never be repeated. There is something about these two songs that get you off your feet and onto the dance floor, or at least your living room dance floor. Both songs has so much energy to them that will keep you dancing and listening for days.


Yoon Mirae - Jamcome on Baby
I don't have a favorite between the English and Korean versions because both are stunning. They are next to each other so I listen back to back. I love her rapping and singing here but I do enjoy the rapping on the English version more since I can understand just how hard Yoon Mirae is going. The song is so cute with it being about a couple that just want to be together sensually. The beat is perfect here as it is a nod to MFBTY's style yet Mirae is able to easily make it her own while as a solo artist, incorporating it into her own field. Definitely a song that should be on everyone's playlist.


Hwaji - What Do I Care
Another great and chill track from rapper Hwaji that is also great lyrically. As I listen to it it honestly should have been on his second LP this year, Zissou. Hwaji's laid back flow mixed with producer Young Soul's  mellow beat has a made a track great for extended listening. I pop this track on and I just feel alright (no pun intended). 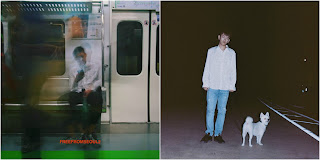