Every person that loves anything belongs to a fandom or a group of people that just connect with each other through something. But with all these fandoms, a majority of these fans in these fandoms and groups, are retarded. Even if you yourself is a long term, hardcore fan that's been around for 30 years, someone in the same circle will call you out for something you said. Wrestling Fans do this the most.

So its 2016 and Goldberg vs Brock Lesnaar 2 is happening again. No one really wants this match no matter how hard they cheer at the shows. If you go to the shows, you have to react so therefore those emotions are just based on being in the same building and seeing you favorite wrestlers of the past and future put in work. No one cares about a 50 year old Goldberg who hasn't stepped in the ring in 12 years trying to take on Brock Lesnar in his physical prime. Goldberg was trash when he was fit so a 50 year old Goldberg with ring rust is even worse.

After this week's Raw, Goldberg said that he blames the slip he had due to ring rust. If you fall during a knee strike and are long winded after two moves, you're not ready for a full match with a dude who doesn't care about safety. So I said that on Twitter and this one guy says "He's 50 and hasn't wrestled in 12 years. Maybe you should try it kid". So what does me not being a wrestler have to do with this man potentially hurting himself for the rest of his life just because he wants to wrestle again without any training? So I tell him to tell Goldberg to "try it: and he tags Goldbeg in the tweet as well some other dumb shit.

At this point I'm thinking, "He's obviously hurt". I try to stop talking to him so then he starts replying back with lame sarcastic puns. I'm already over buddy but he keeps talking to me. My thing is, if you actually cared about Goldberg, you would email him and tell him to calm down before he's playing catch with his son in a wheelchair. Long story story short, fam got mad at and blocked me because Goldberg can't wrestle. He called me scum for pointing out that Goldbeg might actually die. When Goldberg is actually wounded I'll tweet him from a different account and ask him if I'm still scum. This had been part 1, come back next week for part 2. 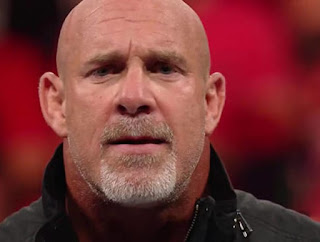