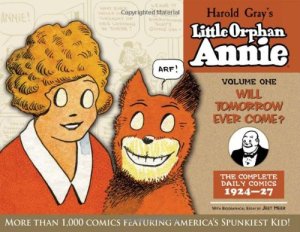 On the 9th of May 1968, American cartoonist Harold Gray died in La Jolla, California. His death marked the end of a very prolific career, but the fame of his newspaper comic strip, Little Orphan Annie, outlived him for a very long time. The story of an innocent vagabond girl wandering through a world of misery and corruption was remarkable for many reasons but most of all for the fact that it was the first ever comic strip that employed serious political philosophy. “Such expression was unusual because… syndicates did not wish to involve themselves in politics – their newspapers represented various political persuasions.” (Moira Davison Reynolds, Comic Strip Artists in American Newspapers, 1945-1980). And with the growing popularity of comic strips in America, it became more evident that they had become an important tool in shaping public opinion; as noted by Reitberger and Fuchs: “Comics, together with the other mass media, are a substitute for genuine folklore and culture and have developed into a self-perpetuating institution, an integral part of the American Way of Life. Of all the mass media, comics mirror the American Collective Subconscious most faithfully, and we know… that comics in turn manipulate and exploit the subconscious.” (Reinhold Reitberger and Wolfgang Fuchs, Comics: Anatomy of a Mass Medium).

The title for Gray’s comic strip was borrowed from the 1885 poem Little Orphant Annie by James Whitcomb Riley. However, the actual character of Annie was drawn from real life and was based on a little girl Gray accidently bumped into on the streets of Chicago. “I talked to this little kid and liked her right away,” Gray said, “She had common sense, knew how to take care of herself. She had to. Her name was Annie. At the time some 40 strips were using boys as the main characters; only three were using girls. I chose Annie for mine, and made her an orphan, so she’d have no family, no tangling alliances, but freedom to go where she pleased.” (Harold Gray, The Complete Little Orphan Annie Volume One: Will Tomorrow Ever Come? Daily Comics 1924-1927)

In the strip, Annie’s story begins in a dreary, Dickensian orphanage from which she is taken one day ‘on trial’ by the rich and mean Mrs. Warbucks. Their relationship is a bit of a rocky one, and Annie ends up being sent back to the orphanage, or to other families, numerous times. In the meantime she develops a strong bond with Mrs. Warbucks’ husband, Oliver, who calls Annie his ‘daughter’ and is always on her side. On most occasions, complete episodes of the strip end either with Annie leaving a family she has been living with, or with her being rescued by ‘Daddy’ Warbucks from some difficult situation. In between the orphanage and her new ‘homes’, Annie usually wanders the countryside and has adventures, meeting and helping strangers in their daily struggles. In her freedom though, Annie acquires more adult than child-like qualities: “Annie performs as a precocious child who is viewed by her adult friends as having adult capabilities and wisdom beyond her years. In one instance the final decision on a suggested business venture, which in fact involves several adults, is referred to Annie. In her relationships with other children, however, Annie’s situation is different. She is not well accepted by her peers because of her diligence in doing her schoolwork and her inclination to work rather than play. Such a comment as ‘Well, I figger th’ sooner I get a fair idea o’ what’s inside o’ those books, th’ sooner I’ll have time for parties. I’ve known too many kids who never let their lessons interfere with their fun. I’d rather amount to somethin’.’ is not likely to endear her to most eleven-year-old.” (Ellen Rhoads, Little Orphan Annie and Levi-Strauss: The Myth and the Method, The Journal of American Folklore, Vol. 86, No. 342, Oct.-Dec., 1973)

According to Ellen Rhoads, who thoroughly analysed several episodes of the comic strip, Little Orphan Annie is constructed around certain structural contradictions, such as Ambiguous Social Status versus Social Acceptability or Lack of Power versus Power. Her observation seems to be supported by Lyle W. Shannon, who wrote:  “Actually, Little Orphan

Annie presents a picture of the world about us as many see it, one in which the hardworking captains of industry struggle against a vicious and uncompromising underground in order to protect capitalism, earn large profits and thus assume their social responsibilities, i.e., be charitable to the needy.” (Lyle W. Shannon, The Opinions of Little Orphan Annie and her Friends, [:in] Bernard Rosenberg and David M. White, Mass Culture). On the other hand, Leo Bogart summarised the strip as follows: “Analysis of the “Orphan Annie” strip suggests that it might have a strong appeal to persons who feel weak or frustrated. For them the strip provides wild fantasy, even magic. It permits regression to the happy days of childhood by introducing an all-powerful father-image who can always be counted upon to set things to rights. It offers hate objects, and objects of righteous superiority feelings … The strip was liked by persons of constricted reading habits, persons dissatisfied with their position in life, apparently with more than their share of aggressive feelings.” (Leo Bogart, Comic Strips and Their Adult Readers, [:in] Bernard Rosenberg and David M. White, Mass Culture)

Overall, under the guise of a funny story, Gray expressed his general populist attitudes. He despised “loan sharks and speculators while celebrating hard working ordinary people whether they’re successful (“Daddy” Warbucks) or not (the poor struggling farmers, the Silos). In the 1920s, Gray even defended labor unions, having Annie launch a successful one-girl strike against a boss who mistreats her. Gray’s political opinions would take on a more partisan salience in the 1930s when the presidency of Franklin Roosevelt polarized American politics into those who saw the New Deal as the salvation for the working class and those who saw it as the end of American liberty. Gray fell into the anti-FDR camp and Annie became much more explicitly right-wing.” (Jeet Heer [:in] Complete Little Orphan Annie). By doing so, Gray pushed the comic strip industry onto a totally new trajectory of engaged political criticism.