On voting for Clinton and watching "Weiner", the documentary 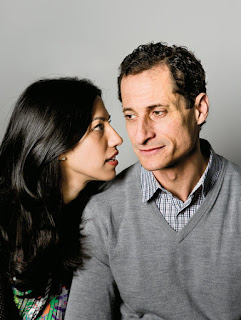 I did two things yesterday. I mailed in my vote for Clinton. And I watched Weiner, the documentary.
The latter was a mistake.
It – the whole it of it – reminded me of the one and only time I watched COPS. Cops was obviously a lineal descendent of the lynching postcard. Americans used to enjoy their lynchings, and liked nothing better than photographing themselves stringing up, pouring hot tar over, or castrating black men.  If you have ever seen a “postcard of the hanging” – to quote Dylan – you will notice the hectic, satisfied faces of the spectators. Looking is an act.

Does a Home-Based Business Really Wor…
Cat Coronavirus Diary – Day 14
Wuhan Weather Report
You Say Covid-19, I Say Hangar 18!
Can I consistently feel better?
Weiner plays with different spectorial pleasures, but it also operates within the condition that the spectator is not at all implicated by the scene. But the spectator is. Watching Weiner and his wife Huma Abadin was painful – these people have grown up without any consciousness of the complicity of the spectator.  A documentary is a picture document, watch it, is  probably what went through their minds when, for giggles, or thinking that this would cement their celebrity, they agreed to this mess.  Clinton should have let Abadin go as soon as she heard about the project. But she didn’t. So here is Weiner, coming from a valid premise – that we organize our lives around a set of segregations, putting fantasy in this corner, and our ideas of tax policy in this corner – and refusing with all his might to see that this set of segregations is conditional. In fact, his campaign for mayor was a vast effort to project onto the city at large his notion that the segregation of fantasy and reason is absolute, and privileged. Abadin seems to believe the same thing, oddly enough.  And the filmmakers condition their film on showing the breakdown of this belief without ever questioning their own belief that they are just filming.
It is a swamp of Bad Faith – no, it is the great dismal swamp of bad faith, the Offeefenokee of bad faith. The Everglades.
One and only one fact pertinent to our civil life comes out of the film, which is that the Weiner couple had ample resources, enough at the very least to allow each partner to BUY THEIR OWN FUCKING LAPTOP!  Like, who shares a laptop? So why Weiner and Abedin ended up using the same laptop, why Abedin’s emails end up mixed in with Weiner’s sexting, is a mystery. I feel for Abedin, less because she married the wrong man – these things happen – then because she has apparently given her life to the Clintons. To be absorbed in the ego of an oligarchic couple is an unbelievable waste of a life.  Unfortunately, in this case, one member of the couple is going to be President. Painful as if is not to have your factotum at your heels at all hours, it is pretty obvious that Abedin needs to be let go. I don’t believe Clinton is going to lose, not to Trump, but definitely Abedin has sacrificed three percentage points in the victory, which could be life or death for many downticket candidates.
At the moment, Clinton might have no choice but to keep Abedin. But she needs to get rid of her, just as LBJ needed to get rid of Bobby Baker. Politics aint beanbag.

On voting for Clinton and watching "Weiner", the documentary