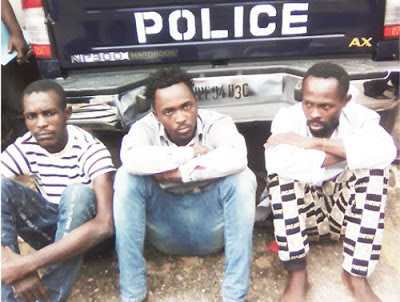 The suspects, Shola Owolabi (28), Michael Lanre (21) and Samuel Akpan (34), denied it was a gang-rape. The suspects said it was with her full consent and approval.

They also claimed they recorded the act mistakenly. But the Commissioner of Police, Mr. Fatai Owoseni, who paraded the suspects yesterday at the Command Headquarters, said the men were fond of gang raping young girls and recording the girls in the act and uploading it to embarrass the victims.
Owoseni said when the matter was reported at Ipaja Ayobo Police Division, the policemen swung into action and arrested the culprits.

According to him, the suspects also confessed to the crime during interrogation. Owolabi said he and Lanre met Akpan making love to the girl.

He said:
“I went to work that fateful day. When I came back, I went to Samuel’s house only to see him making love to the girl.
“When I entered my friend’s room, he just finished making love to her. I persuaded the girl to allow me sleep with her and she accepted.
I made love to her too. While I was doing it with the girl, Michael (Lanre) walked in and brought out his phone and claimed he was using the torch on the phone to look for something in the room, but he was filming me as I was making love to the girl.”
Owolabi said they were arrested when the landlord of Akpan’s house, who heard the scream of the girl, went to report the matter at the police station.
“We were arrested in the act,” he added. Lanre explained that he also had sex with the girl, but he did not know the girl before then.

He said: “Owolabi and I walked into Samuel’s apartment when we met both of them making love. We persuaded the girl to allow us to make love to her too which she consented to. We went only one round each.
When I brought my phone out, I only wanted to use the torch, I never thought of filming them in the act. It was a mistake.

I did not upload the video on the internet.”

Akpan told New Telegraph that he did not know his friends would come when he was making love to the girl. He said: “I am a bus conductor. It was some boys in my compound who I used to send on errands who saw the girl and introduced her to me.

We became friends thereafter. “The following day, she came to visit me. We were both inside my room and I persuaded her to allow me to make love to her which she accepted.

My friends walked in and met us in the act. The room was dark, one of them wanted to use the torch on his phone.

He did not know that the camera of the phone was recording what we were doing. It was when we got to the police station they discovered the video on his phone. “I am not happy to find myself in this situation. I don’t know what to tell my parents back home in Akwa Ibom State if they see me in this condition.”

A Brief Questioning-Meditating on the…
Quick Tips To Talk Yourself Down From…
7 reasons I’m tired of being tired
You Say Covid-19, I Say Hangar 18!
15 Top Trends for Kitchen Design for …