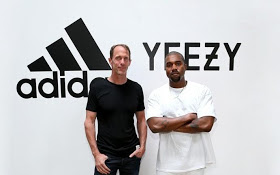 The German sportswear company announced the deal on Wednesday which is being described as the "most significant partnership between a non-athlete and a sports brand," and includes plans of opening Yeezy retail shops that will sell his coveted Yeezy kicks, apparel and accessories.
Additionally, Kanye will also be responsible for designing athletic wear for basketball and football players.
The newly created partnership will afford West a specially created Adidas team that will lead the development and creation of all Yeezy products. Included in the deal is an expansion plan for official Yeezy retail stores that will carry all Yeezy lifestyle products, in addition to their newly introduced performance-based designs.
“Kanye is a true creator who has the ability to see things others don’t. We are excited and honored to build on this partnership, and eagerly look forward to defining the future together,” said Eric Liedtke, adidas’ Chief Marketing Officer, of the deal. “With adidas + Kanye West we are exploring new territories by opening up the sports world to Kanye’s creativity. This is what adidas has always been about, empowering creators to create the new.”
Kanye West said, “These past two years adidas and YEEZY have given a glimpse into our future. This partnership illustrates that anyone with a dream can dream without limitations.”
The new designs and products are likely to hit the market in 2017.

Hired an Autosleeper Duetto
Rumour Has It: Barcelona push ahead f…
How to Create a Virus Safe Lifestyle
7 reasons I’m tired of being tired
Portuguese Arraiolos Rugs