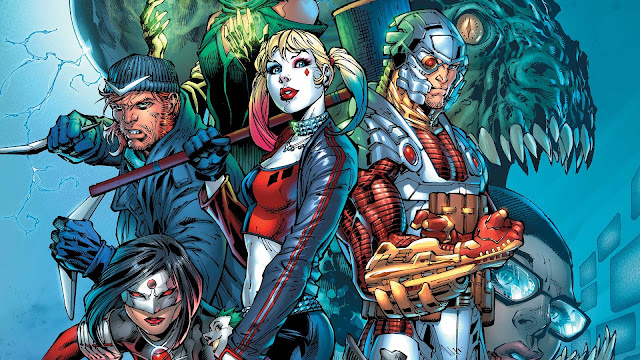 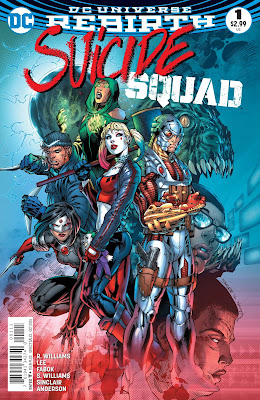 Airdrop of WHACKD Coins Valuing at $7…
Adding a Decorative Fill Pattern arou…
AFGHANISTAN - Peace Talks vs Attacks
Where Songs Come From: Boy Gone Bad (…
Review: How to Make Friends With the …
**NON SPOILERS AND SCORE AT THE BOTTOM**
So I saw the Suicide Squad movie last week. I didn’t like it. I have no problem with any of the characters, except for the one who played Enchantress. She wasn’t very good. But even she wasn’t the worst thing about the movie. The worst thing was that it had clearly been edited either by an ineffectual committee or very incapable people, because there were lots of dropped plot points and moments that didn’t land because they had not been earned. Not to mention that you could have lost half of the cast without any impact to the story. But let’s not belabor the thing, let’s look at the positives: I thought the actors did a fairly good job with what they were given. Even the superfluous ones were okay and made me want to see more…which I didn’t, but wanting to see more is a good thing, right? And of course, the soundtrack is killer, though it seems like the movie was made in support of the soundtrack rather than the other way around. And thus concludes my mini, spoiler-free review of Suicide Squad, the feature film! Now let’s keep this review train a-rolling and check out my review for Suicide Squad #1!
Explain It!
Amanda Waller is on her way to ol’ Belle Reve prison in Louisiana, and it’s hilarious because she’s riding in some super-fast stealth helicopter, and Waller has a little office set up with her laptop and even a framed photograph of her family propped up in the corner. I don’t think Black Ops helicopters have trays in the backs of every passenger seat, so I assume it’s some kind of gyroscopic helicopter desk that has yet to be released to the public at an affordable price point. After hopping off the ‘copter, Waller heads the Suicide Squad, uh, arena, and of course everyone is walking on eggshells because Amanda is a grade-A ball buster. I imagine employees at Belle Reve that half-ass their jobs normally really overcompensate when the Wall is around, like suddenly the prison laundry catches up on their backlog of bloody jumpsuits and the armory cleaning crew makes sure every barrel is polished to a high shine. Waller has Rick Flag and Katana nearby as she selects the iteration of the Suicide Squad best suited for the next mission, which—surprise, surprise—is the same iteration from the movie. But I liked the fact that Waller was choosing this team, because it implies that there are options and the roster will change up in future story arcs, instead of this team being set in stone. I also really liked how each prisoner’s cell was removed from a hive of cells and placed before Waller in a semi-circle by a hydraulic lift. It highlights the helplessness of Belle Reve’s prisoners, as well as the un-fucking-questionable authority of Amanda Waller. 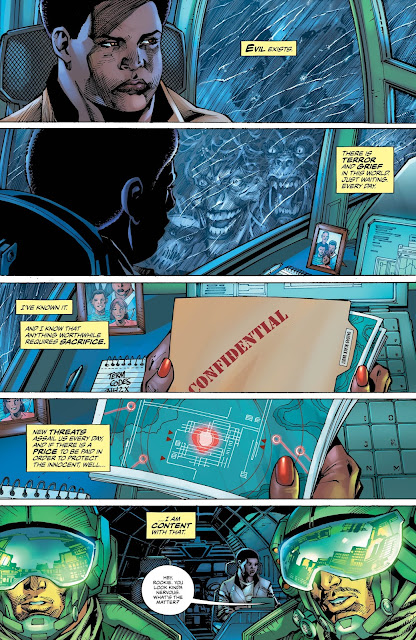 So here we have all the gang at forty-second street: Deadshot, Harley Quinn, Captain Boomerang, June Moon (who is the Enchantress, by the by), and Killer Croc. They’re thrilled to go on mission for Waller, upon penalty of having their brains remotely exploded, except Croc doesn’t want to go to space. So, of course, they are next in space, in some spaceship that looks sort of like one of those duck/bunny optical illusions. But don’t worry Croc, you’re all only being brought into space so you can be dropped into Siberia without being detected by our political enemies, the Russians—ah, it really feels great to be able to say that again. Before dropping them into the stratosphere Starship Troopers style, Amanda Waller’s hologram gives them all a pep talk, and by that I mean she threatens to kill them all remotely, and by that I mean they’ve dropped! And it’s not like the Parachute Drop at Six Flags at all! 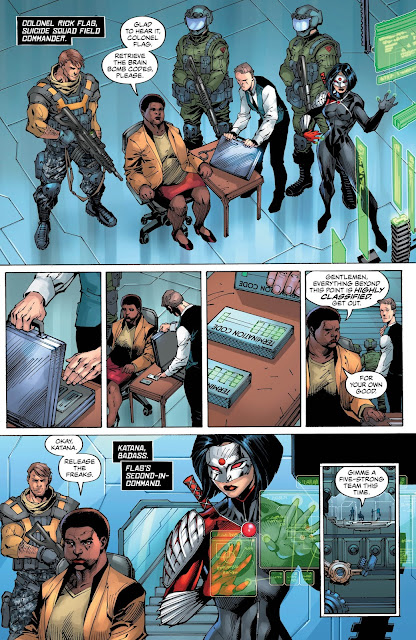 Killer Croc immediately barfs in his helmet, and there are no tasteful cutaways in this comic book. Captain Boomerang also shits himself, but he was already threatening to do so when they were still on the spaceship. It’s for Croc that things get dire, because he pukes so much that he begins to fill his own helmet and drown—yes, in his own bile and chunks. Flag pops out of his seat in the falling ring of bodily functions, and of course that’s where we see Waller is still monitoring them through a little Tandy computer screen, and telling Flag to get back in his seat through what I can assume is a clock radio speaker. The dropship gets destabilized and starts wobbling, as Flag wrenches Croc’s helmet off, releasing a cloud of vomit that really is something to see. Now the ring of pukes n’ farts is completely out of control, despite futile attempts to reverse thrusters or whatever, so Flag tells June to “let her out.” June Moon is like nuh-uh, I don’t wanna, but of course she does, and as I already revealed she is the Enchantress, which is a big deal in the context of this comic book for some reason. She creates a big, uh, like green light that might be protecting them? I dunno because they slammed into a glacier and now they might be drowning underneath. We’ll find out next issue! 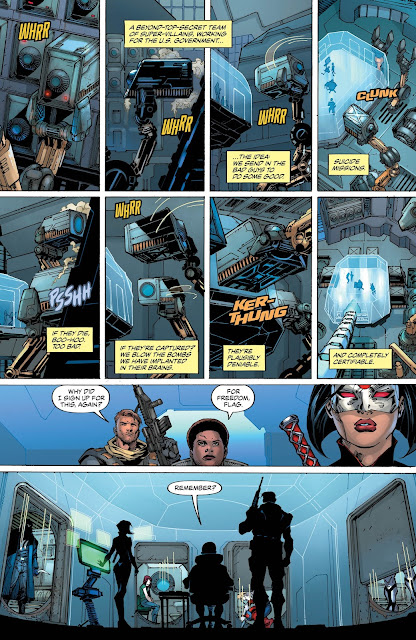 The back-up focuses on Deadshot, and it’s a pretty good story that also provides some motivation for Floyd Lawton’s crude ‘tude. It’s about a time Kobra contracted him to kill Bruce Wayne, but instead of offering money they offer not killing his kidnapped daughter, Zoe. So Deadshot agrees to kill Wayne, but instead contacts Batman for help secretly. He promises to use rubber bullets, but at the very end kills some guy directly threatening Zoe’s life, and acquiesces to a deal made with Batman to go to Belle Reve prison, bringing us to present conditions. So wait—he wasn’t going to go to prison if he didn’t kill anyone this time? On what grounds? He’s still a hired killer! I mean, he made a deal with Batman, but I don’t see how he could have negotiated immunity. I also appreciate the fact that Deadshot was able to switch from rubber bullets to lethal bullets in his wrist gun, without having to make a visible change. I’d really like to see the inner workings of this weapon! 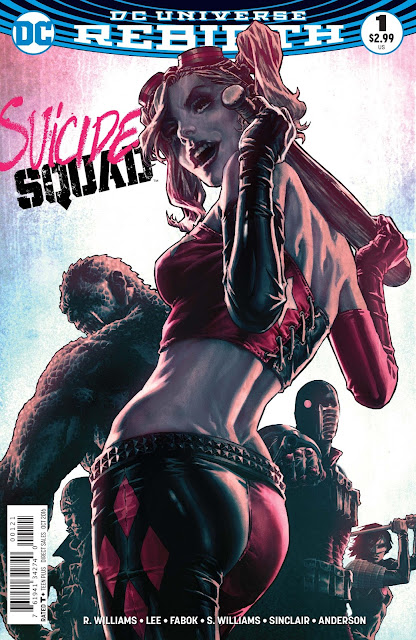 I dug this issue quite a bit. The characterizations were really clear and well-defined in a relatively short amount of space, since we had to spend a quarter of the issue watching Amanda Waller walk to her Task Force X arena for crying out loud. There were also some genuinely funny bits, and not just the ones that were crude and gross (which, of course, I liked the best), and moments of teamwork that are pretty important when you want the reader to believe they are reading about a team. The art is Jim Lee and Jason Fabok, so: faced. If you’re not giving this a look, then you must have something against convicted supervillains being used for international espionage and subversive assassinations.
Bits and Pieces:

It's the first official mission for the classic Suicide Squad team since Rebirth, and it feels like a familiar, dysfunctional home. In the relatively little space we see them together, there's plenty of action, laughs, and character work that makes it all pretty compelling. The back-up is cool, tells us more about Deadshot and establishes his motivations for those wondering or confused (given other character changes during Rebirth.) Frankly, I could have excised the back-up and done with more story, but that's what you want, right? Leave the audience wanting more?