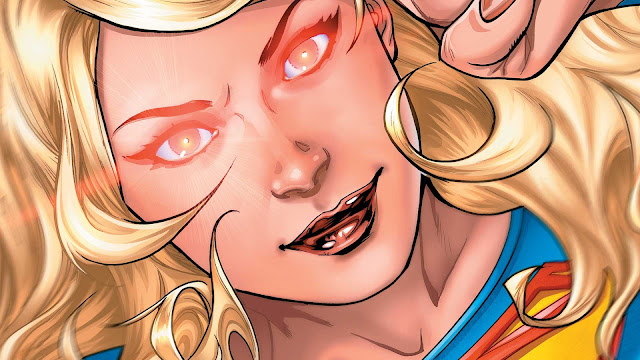 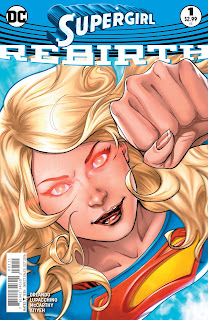 She's finally here...Supergirl!!!  While we got to see her in the Final Days of Superman, it's so nice to Supergirl fan and pretty much devoured every bit of information on this book as it came out, except one big nugget...the release date!  Yep, it kind of snuck up on me, but it lead to me being surprised in a Christmas Morning sort of way.  So, now that it's here, is it as good as I'd hoped or a disappointment in a Christmas Morning sort of way? Let's find out...
have her in her own book.  I am a huge

The issue opens in Argo City where Zor-El is putting into play the pieces that will one day plague his daughter, but also makes him look like a dick in the here and now.  It's one of those "the needs of the many" decisions that makes enough sense to me, but still...  The brief scene ends with Zor-El lamenting the "loss" of his daughter, but to feel any real emotion, the reader has to chip through the ham fisted dialogue on display.

From there, Steve Orlando throws us into the fire without much explanation, but it's easy to surmise that the D.E.O. is involved in giving Supergirl a second chance.  In fact, Cameron Chase, the D.E.O. Director says it.  A second chance at what?  For one, having powers.  This is the beginning of a laundry list of problems I have with this issue and really, they all boil down to one major thing... inconsistencies in continuity. 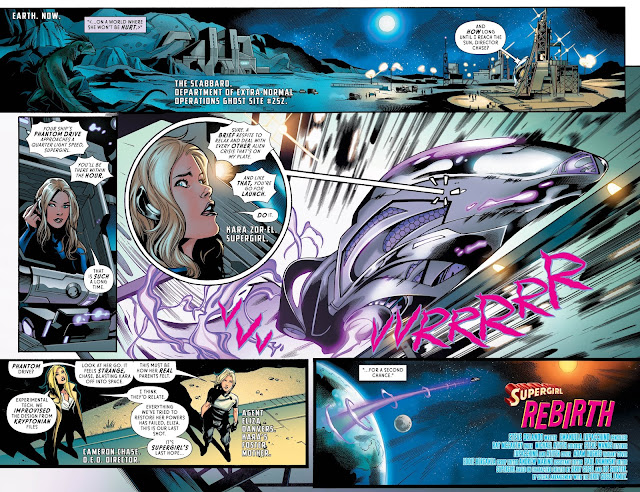 I am really trying to keep an open mind with Rebirth, but when we've been told over and over that this isn't a reboot, I don't expect it to be a reboot.  Of all the other Rebirth books so far, this is as close to a Reboot as we have gotten.

The issue continues when we are introduced quickly to Supergirl's foster parents, the Danvers, and then it's off to the races.  As Kara rockets towards the Sun (you know, to get her powers back), a hostile suddenly appears at the launch site and low and behold, it's the "piece" that I mentioned earlier...Lar-On.  He's straight out of the Phantom Zone...he's pissed and turns into what he's supposed to turn into, a Kryptonian werewolf!

Of course, Kara's coms are down (what can she do at that moment anyway?) so the fight is on and the odds are really pushing to Lar-On's side.  That is until Supergirl powers up and joins the fight.  We learn some interesting nuggets about Zor-El before Supergirl tames the savage beast.  Through music?  Nope, by telling a bit of her back story. 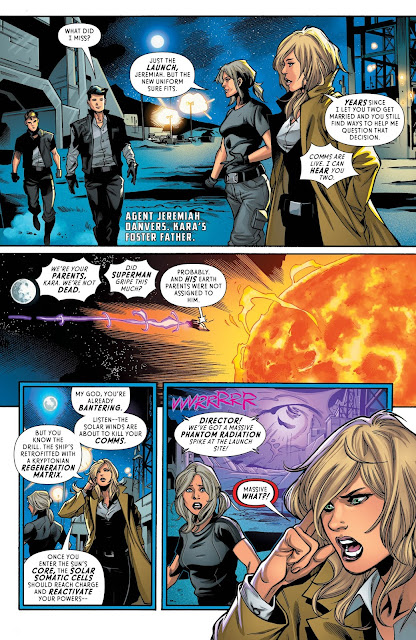 After promising never to abandon him (?), Supergirl makes sure that the DEO will try to cure him and then joins in the cleanup.  This is where the whole issue comes crashing down for me.  While we get the start of the typical "you have to do real work to know what it's like to be human" speech, Eliza Danvers says they've only Kara for a few weeks.  WTF???  This reveal throws off almost every bit of dialogue we have gotten between them.  Just one instance is when Eliza faces Lar-On and says that she recognizes Kryptonian because "It's my daughter's first language".  Oh really?  The daughter you met two weeks ago?  BULLSHIT!!!  Steve Orlando spends this whole issue trying to get the best of both worlds...the fresh off the rocket Supergirl and the one who's Parents have kept her grounded.

Okay, at this point I was pretty annoyed and then Kara goes to talk to Cameron Chase and it got worse.  We find out that Supergirl has only been on Earth for two months total and she went to the DEO because Superman died and she wanted to carry on his work.  This not only goes against what happened in the Last Days of Superman story, but pretty much throws all 40 issues of the New 52 Supergirl out the window!  Again, if it's a reboot, let me know and I will try my best to deal with it. 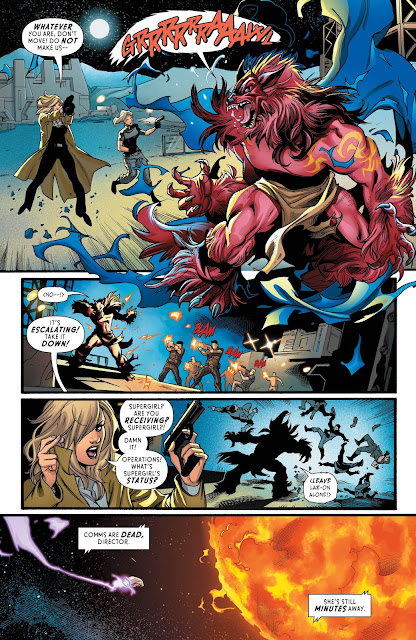 All this wraps up to make this book more in line with the TV show...Kara will help the DEO with extra-normal threats while monitoring her work as Supergirl.  Listen, I have no problem with that at all and actually like that DC is trying to make the book more accessible to the television fans, but it wouldn't have been hard to make it work AND keep what happened before.

The issue ends with the promise of a figure coming back into Kara's life and while it's pretty much been spoiled a hundred times over by now, I will let you guys see it for yourselves.  It's one of the things that I am looking forward to even though I'm worried now how it will all fit into this story.

I am really torn with what I just read.  I don't mind the new direction, but why reboot this when you don't have to?  I guess that's not my decision to make, but I don't have to like it.  I also don't like the heavy handed dialogue throughout this issue, so there's that as well.  I am still going to give this book a chance because I love Supergirl and I promise, I will try to put my anger to bed, but right now I feel like I'm either being laughed at behind my back or treated like someone who doesn't matter.

I did love Emanuela Lupacchino's art!  Everything looks fantastic and reminds me of her work on the New 52 Supergirl...wait a minute, that doesn't exist anymore.  Never mind.  It does look great, though, and is the saving grace of the entire issue.

I'm using this review to get all my anger out at this being a reboot and not a rebirth.  It's a cleansing exercise and hopefully I can come out of it with a clear vision of what this book is and continue on into the series with a clear head.  I want to enjoy this book because I love Supergirl, but that will have to wait.