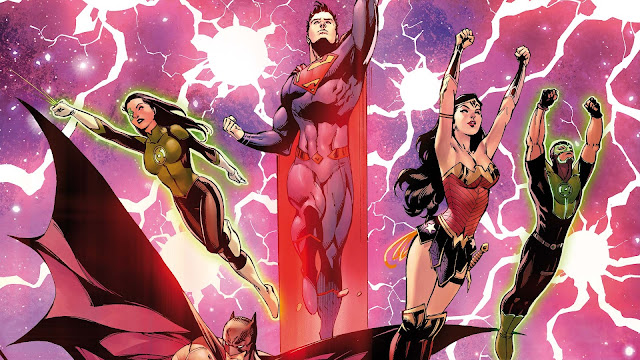 It's Made of People! 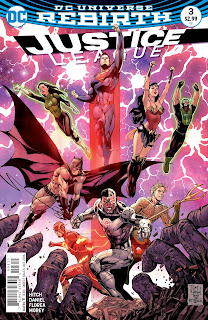 Okay, the Justice League book hasn't been my favorite since Rebirth started.  It's a shame because not Baz and Jessica Cruz could be a lot of fun and I was really looking to this book to see the beginnings of Batman and Wonder Woman's relationship with the Pre Flashpoint Superman.  Maybe I was expecting too much, because it has felt the opposite of new and fresh under the direction of Bryan Hitch.  That's not to say all is lost.  I am a man with a very short attention span, so if Hitch can just right the ship a bit, I'll jump on board.  Is this the issue where that happens?  Let's find out...
only should it be leading the pack into this promising future, but also because we have the potential for such a new and fresh team.  The new faces of Simon

The issue begins with Wonder Woman catching us up on the big bad of this book, The Kindred.  She really only knows as much as the reader so we only get a little bit...and she repeats it in case you miss it the first time.  That leads to her finding out that the Kindred is made of people (!) right before it engulfs her as well.

While Simon and Jessica fight off the invading bugs, the Kindred around the world keep talking about the Purge, but also of Singing and Forever.  I hate to say it, but Eric Shea appears to be right...the bugs may be the enemies of the Kindred.  What are the odds?!? 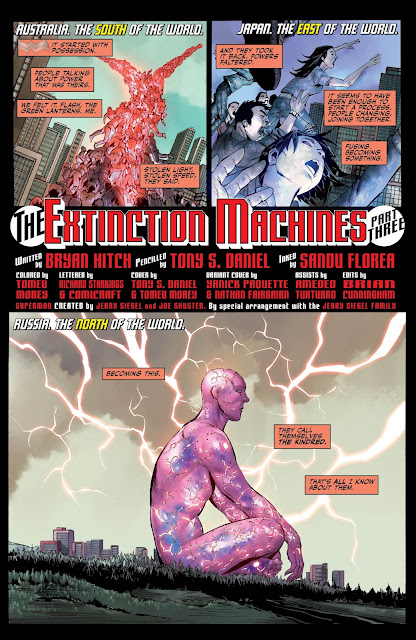 The issue continues with the Green Lanterns heading into space because they are, you know, Space Cops, while Batman heads to the Kent's Farm where he wants Cyborg to meet him.  After the Lanterns go through a wormhole to a dying/alive planet, we see Superman, Lois and Jon and I was thrown out of the issue.

This is Pre Flashpoint Superman who doesn't go by Clark Kent for one. Secondly, Lois is talking to Clark as if this is their universe. Bryan Hitch finally does get his bearings back and Superman heads to the center of the Earth through a Boom Tube.  However, Cyborg tells him it would be too dangerous to open another one the opposite way.  Now that just seems like a convenient way to force some tension into the issue, but maybe that's just me talking all logical and all.

While Superman struggles to survive at the Earth's core, Cyborg saves Lois, Jon and Batman, but the bugs all attack him instead.  We then visit Atlantis and find out that the stolen words are magic and are tied into the crystals Aquaman collected last issue.  If you aren't at least a little lost by now, you are better than me! 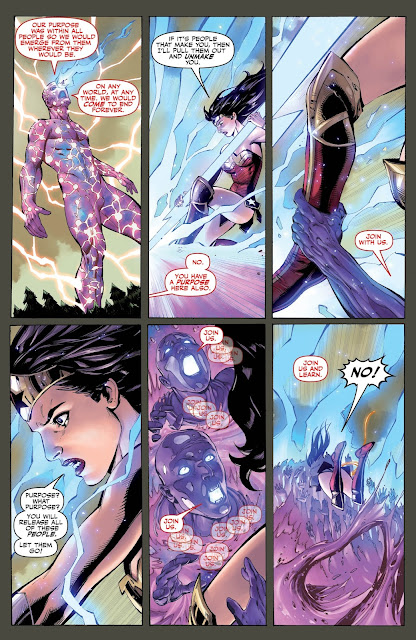 Bryan Hitch does his best to lose everyone left by having the song stop and all the iterations of the Kindred gather together.  The issue then ends with Superman finding the first part of what he's looking for, but not being any closer to solving anything.  Just great!!!

I'm not sure what's going on in this issue.  I'm serious, I really don't know.  Bryan Hitch seems busy making a mystery or he's just not explaining things properly, I'm not sure which.  The Kindred, The Purge, The Stolen Powers, The Song...I put them all in capitals because we are made to believe they are a big deal, but how can they be when we don't even know what they are?  I have to review this book, but if I didn't, I'd drop it like it's hot after reading this issue.

I usually love Tony Daniel's art, but he even seems bored with this story.  Everything looks good, but I'm used to everything looking great when he is on art.  Keep your chin up, Tony!

It's only taken Bryan Hitch a couple of issues to make this book a complete mess.  The story is paper thin and only seems intriguing because we aren't getting any information.  What we have gotten is confusing and uninteresting and makes me want to drop this book right now.  I just may do that.
4.9/10