Two Stories at the Price of Fun 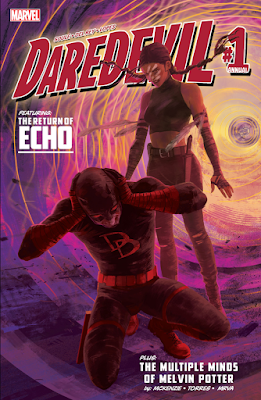 3 Things People Always Remember
A Wonderful Winter Ahead At One Snowm…
Long Island Sounds August 2019
50 Best Things To Do In Thailand {The…
MOTHERS' MESSAGE - Breaking the Cycle…
Cover Price:$4.99
On Sale:August 3, 2016
**NON SPOILERS AND SCORE AT THE BOTTOM**
Readng this issue of Daredevil, I was reminded of this Saturday Night Live skit from 1988 (apologies, it’s a link):
https://video.yahoo.com/first-citywide-change-bank-2-000000534.html

There were two or three of these CitiWide Bank commercials, about a bank that makes exact change in any denomination, that year, but this the one I remember best because of the punchline: “All the time, our customers ask us, ‘How do you make money doing this?’ The answer is simple: volume.” It’s funny because, of course, you will never make any profit exchanging money at a 1:1 ratio, no matter how many transactions are made. This Daredevil Annual #1 is sort of like that, in that it provides two stories for a dollar more than the regular price, but the volume of stories provides about the same satisfaction as a single issue. Did I just give away my opinion of the issue in the introduction? Oops! Well, read on anyway, you might just learn something.
Explain It!
LATE EDITION EDIT: When reviewing this comic book, despite having claimed to be a Daredevil comic book, I actually forgot that he is blind, not deaf! So a lot of the complaining I do later on has no basis. I'm not rescinding my stupid words, though, so feel free to attack me in the comments!

You gotta hand it to Marvel, that opening recap page goes a long way to bringing the reader up to speed. For instance, this recap reminded me that Echo, aka Maya Lopez, has been flitting around the same rooftops as Daredevil. I had forgotten because we haven’t seen her in several issues. Never mind the New Reader, the regular reader gets use out of these opening pages, too! It also reminds us that everyone forgot Daredevil’s civilian identity of Matt Murdock, and that he became a District Attorney in New York after the events of Secret Warsthat still have not been explained, which just pissed me off right off the bat. Not a good look to keep picking at that scab, It’s just unconscionable that none of the Marvel books have revealed diddly-squat about what happened during that elapsed eight months post-Secret Wars—and many of the books stemming from that event are more than eight months old now! I’ll probably rant more on this later. 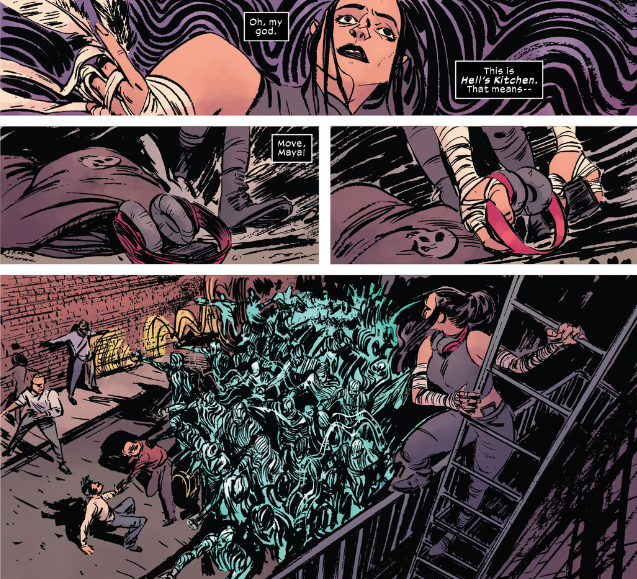 So Maya and this dude Eric are at a rock concert, at a club called Terminal 5, which is actually a real place located on 56thStreet and 11th Avenue. Though Maya is deaf, she agreed to see nameless rock musician(s) because she likes the vibrations and the acrid smell of body odor. The headliner, presumably, takes the stage to sit at a grand piano (not rockin’, dad!) and plays a song that lulls everyone in the crowd to sleep, except for Maya who naturally can’t hear the music. She reaches out and touches Eric, who then turns into…a scribble monster? The art style here…it’s very unpolished Paul Pope in my opinion, and maybe a little too rough for a story that requires a pretty creative depiction of beings made of sound. Because that’s what’s happened, apparently: everyone that hears this melody turns into a sound being with their right hands transformed into a satellite dish that transmits the song ever further. Maya realizes that this could become a big issue in a crowded city like New York, and hot foots it out of Terminal 5 to find Hell’s Kitchen’s protector, Daredevil. 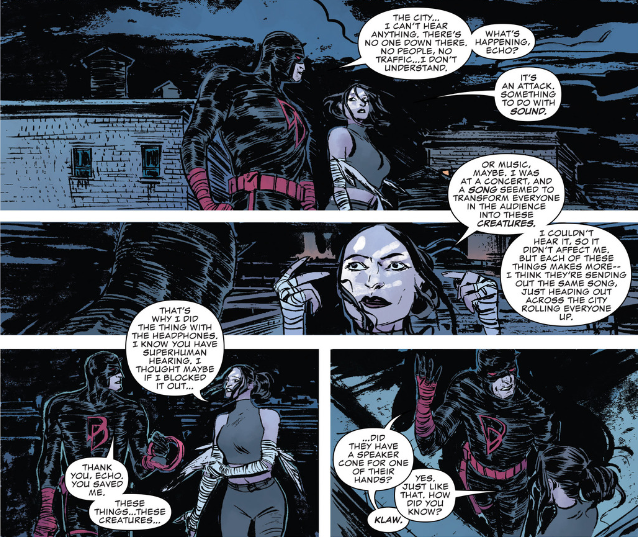 She finds him sort of chilling on a rooftop looking real Han Solo, and slips onto his cranium some noise-cancelling headphones Maya grabbed from a sound being’s shed clothing (though it didn’t look like they were shedding clothing at Terminal 5…I’d have noticed) and plays Prince, clearly because the pure music of Prince will vanquish any sonic antagonist across the galaxy. That’s when I remember that Echo thinks Daredevil can hear, and indeed has super-hearing, which was not true in older issues of the comic. It makes for an interesting exchange, where Daredevil has to play it off like he’s hearing stuff while really just using his radar sense. When Maya describes the satellite dish-handed army being created by this piano song, Daredevil identifies him as the Klaw, and how I wish it was this guy: 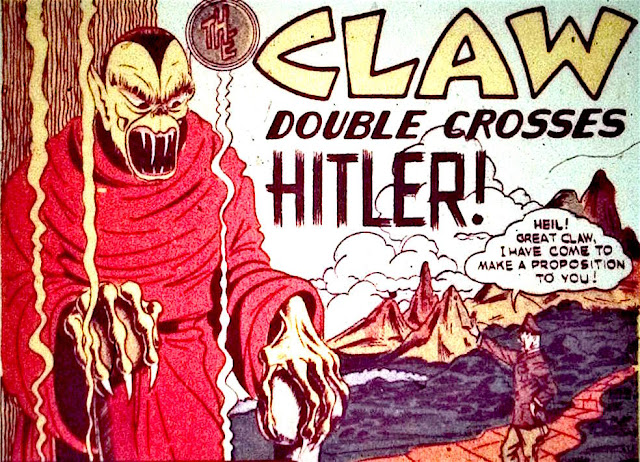 But no, it’s that 80s Daredevil villain that uses sound as a weapon, and not an evil, giant Chinese wizard from comics’ Golden Age. Now Klaw reveals himself as a massive, Godzilla-sized sound being, all being arrogant and stuff. So for whatever reason, Daredevil and Echo decide to go to Brooklyn, which doesn’t make a whole lot of sense since Klaw is like right up the block, but then I’m not a highly-trained ninja or acrobat lawyer with super senses. At Cadman Plaza, they run into the Office of Emergency Management, where some guy is just sort of hanging around waiting for someone to tell him to pre-empt daytime TV with another test of the Emergency Broadcast System. There, Daredevil tells the engineer to send out a signal that is the reverse of the one being used to create sound beings, and Maya says she can recreate the song perfectly because she can see music somehow? So the engineer and Maya scramble to perfect the anti-sound, while Daredevil fights off a mob of sound beings outside the studio. Really, he’s a great choice to do this because he won’t get turned since he’s d…wait, Daredevil got turned into a sound being too? Uh, how did that happen? HOW DID THAT HAPPEN??! That isn’t supposed to happen, I don’t remember anything about people being turned by touch or by a direct blast from a satellite dish hand or any other explanation, I thought you heard the siren’s song, you turned into a member of M.A.S.K. So what the hell is this shit?? It all wraps up with Maya saving the day and melting Klaw like the Wicked Witch of the West, and me wondering what the hell I just read. Can Daredevil hear again? What is going on? Would I have understood better if the art wasn’t so muddy? 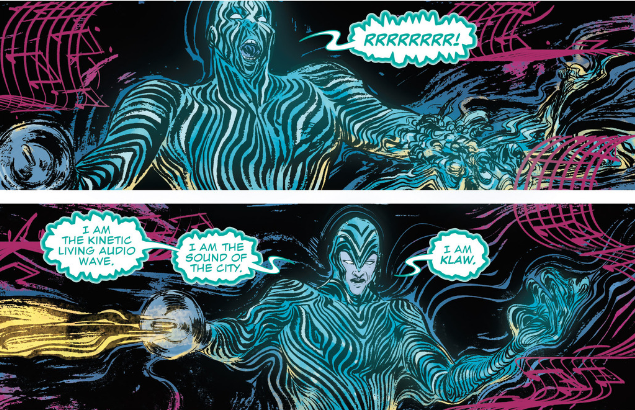 The second story, “Fragments,” is written by Roger McKenzie. He wrote some of the earliest Daredevilstories that Frank Miller ever drew, before taking over the title, and hasn’t been seen on the comics scene for a little while. This tale is the origin of Melvin Potter, aka the Gladiator, a guy with circular saws on his wrists that runs afoul of the mob and eventually, Daredevil. There’s a little bait-and-switch as the first panel shows the Gladiator slicing open the hung, prostrate form of Daredevil in some warehouse/villain’s lair, but it turns out to be a practice dummy. But the art is neat and expressive, there’s lots of blood spray throughout the story, and it ultimately feels good when Daredevil makes Potter cross his circular saw streams, blinding him and sending him into some exposed wires that electrocute him. Don’t worry, though, because the last page depicts him alive and one-eyed in some prison cell, talking to the voices in his head and looking prepped to escape any minute. 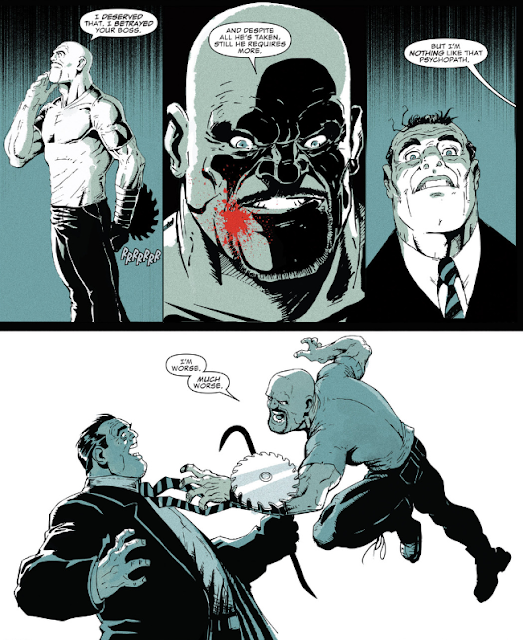 This issue was fairly well a dud. The first story seemed pointless and contradicted some of the basic things I know about Daredevil—namely, that he’s deaf—and felt like it moved too slowly. I didn’t like the art, which I thought was a bad fit for what is essentially a science fiction story. The backup story was okay, nothing really special but well-executed and not worth complaining about. More worth complaining about is that we are almost a year into publication for this volume of Daredevil, and there’s still no indication of how Matt Murdock mind-wiped his identity from the world and wound up back in New York City. Look, I know the mystery of what transpired since Secret Wars has to be teased out, but at this point, when you consider the dollar amount invested in issues without any development, it’s becoming a bit of a rip-off. And it seems contrary to normal literary formulas and devices, to go this long without some kind of payoff to this. I mean, you wouldn’t show a polished, sharpened machete in the first scene of Friday the 13th Part XXIII and not have Jason Voorhees use it against at least one hapless co-ed before the film is done. He we are in our third arc of the volume, none the wiser about why any of it happened. And that is just a poor show, old chaps. 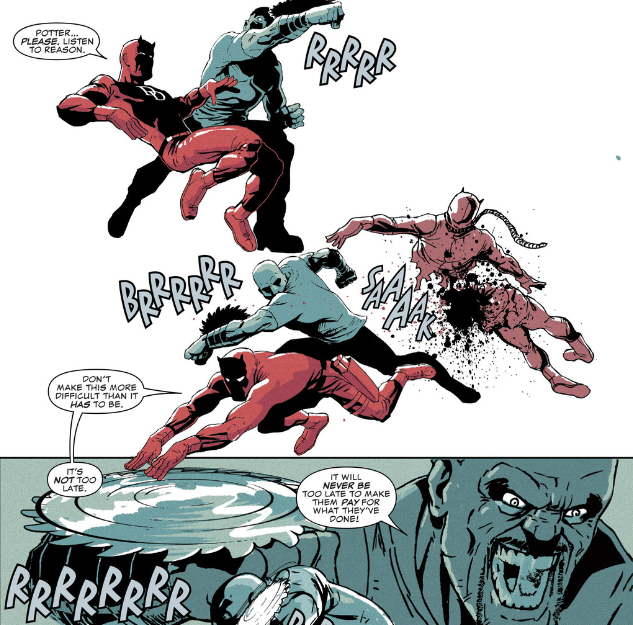 Two fairly tepid stories that seem unlinked to the prevailing narrative make for a pretty disappointing issue of Daredevil. This iteration of the character seems burdened by past versions and pays a lot of service to the Daredevil fanboy, but provides little in the way of interesting stories or characterization. I mean here, Matt Murdock is District Attorney of New York, yet the last time we saw him in his civilian garb was three issues ago--and then he was in a Chinese casino, not litigating at all! The whole thing seems like a missed opportunity, and as we head into another renumbering I wonder if I should bother being attached to this book at all.