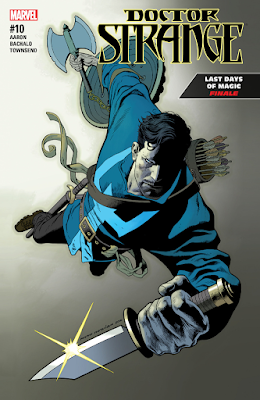 Lacrown ft Small Doctor – Abi (Mp3 Do…
Traffic Wardens reject new uniform ba…
What Marathon Running and Successful …
$6B processed via Blockchain Medical …
Portable Oxygen Concentrator – A Boon…
Letters By:VC’s Cory Petit
Cover Price:$3.99
On Sale Date: August 3, 2016
**NON SPOILERS AND SCORE AT THE BOTTOM**
We have arrived at the conclusion of the five-part story “The Last Days of Magic!” so I suppose this would be…the last day? I wonder if it will be like the Last Days of Disco: a half-believable, dull recollection of partying hearty. Or perhaps like the Last Days of Coney Island: a poorly-drawn, shamefully-animated half-assed attempt at a Ralph Bakshi cartoon. Or maybe it’s like the biblical Last Days: a crazy chaotic mess of weather anomalies and giant angels with multiple heads on snake necks and with lion faces breathing fire that neither burns nor ignites the faithful! Oh, please let it be like the biblical Last Days! With Doctor Strange, that’s actually not impossible. So let’s stop joshing around and dive into the review!
Explain It!
It’s sort of weird to hop on a series at the end of a five-part story, particularly when that is advertised on the cover, so I’m not going to bother rehashing too much here. Speaking of the cover: is that the most bullshit you’ve seen in a while, or what? They might as well have just had a hand giving the reader the finger, for all the effort that went into this one. I’m sure there’s some incredible reason as to why the cover to Doctor Strange #10 looks like a poor man’s version of the character selection screen on Street Fighter II, but the fact is that it looks amateurish and like the comic book is an afterthought. Surely there was something in inventory that would have been better. 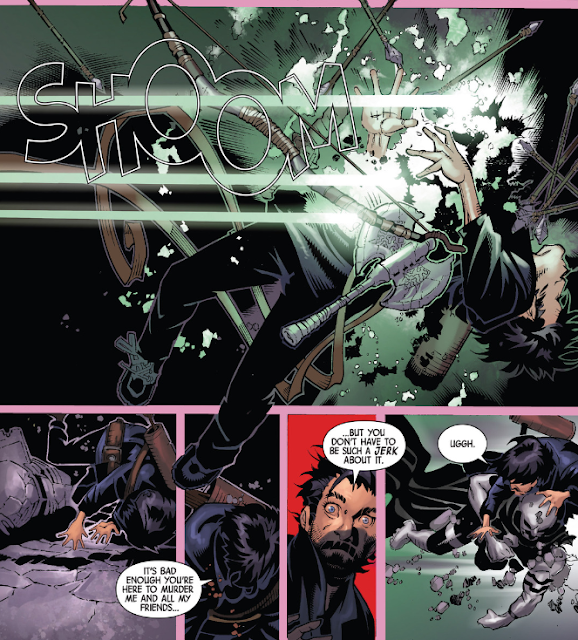 Anyway, Doctor Strange is down in his basement, facing off against Imperikul with his paltry magic weapons, while a massive heap of slop with eyeballs and mouths that represents the pain that Strange has deferred when casting his magic oozes in the background. Strange fires some magic arrows, but Imperikul just absorbs them and sends them back at the good Doctor, with devastating effect. Imperikul beats him up for a while, then—as the fight is happening—Strange encounters the pain goop, which naturally wants to kill him. Meanwhile, the weapon battle between Marvel’s magic heroes contingent and Imperikul’s drones wages just outside the Outer Sanctum, and in the Himalayas Stephen Strange’s pal Zelma starts bleeding from her eye and sends good vibes over to Greenwich Village, where the Doc is battling. Later, Wong and the rest of the monastery join her in their chant. Just so you know about it. All this stuff is happening in the background. 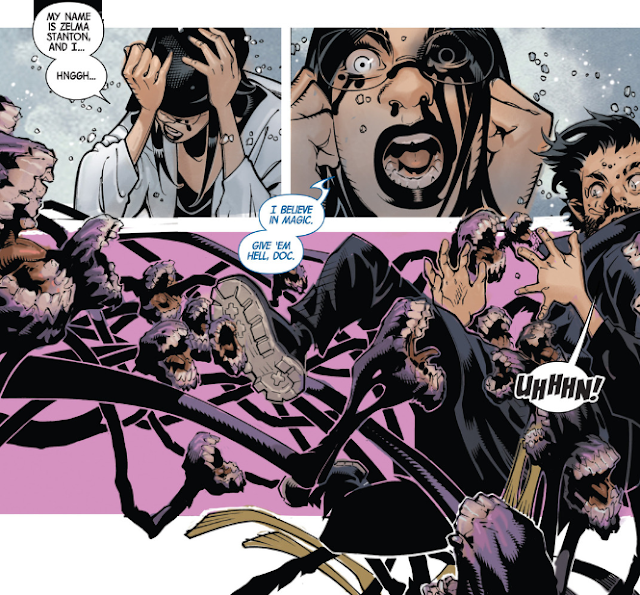 So back to Imperikul and the Doctor and the pain gak are all hanging out in the basement, and Strange decides to strike up a deal with the pain paste to team up with him against Imperikul. The pain sludge wants to kill Doctor Strange, and indeed believes the honor is, by rights, the pain splooge’s, so it fends of Imperikul to save the Doctor for later, more justified murder. After some round robin-style fighting, Strange throws some powderized Ancient One in Imperikul’s eyes, blinding him and—I think causing some giant green explosion that reveals his invasion to normal (non-magic) humans? I think that’s what happens…whatever it is, the shield keeping the world at large from seeing the massive war between science robots and magicians happening right next to them has failed, which is nice because Scarlet Witch bet her friend five bucks that it was happening. At this point, the pain slurry oozes all over Doctor Strange, forming a kind of sticky, black suit with toothy mouths all over it, and which reminded me of the time Squirrel Girl attacked Doctor Doom in a battle suit made from live squirrels. This is less exciting, though, since Strange uses his new power to punch the living daylights out of Imperikul, eventually setting off another massive explosion that knocks out his invading forces and leaves him weakened. Then, with the help of people worldwide that have believed so much in Doctor Strange that they’ve grown a third eye on their foreheads, Strange pummels Imperikul into submission. In the epilogue, we see that the pain residue has gotten away to attempt murder another day, Imperikul is being held in the basement as Strange’s new pain receptacle (which is a pretty John Constantine thing for him to do), and the world’s magic is still drained or missing or whatever, so basically Doc Strange is going to have to get a day job, and let me tell you his typing skills are not good. Another thing that’s not good is this drawn-out story of Doctor Strange’s failure. Having this epic battle between aliens and magicians that the normal world can’t see really lowered the stakes of the whole thing, but when the solution is to enslave the antagonist and be left powerless anyway, then the fact that this played out over five issues really feels like a lot of nothing going on. I do like the art in this book, though I wonder why it requires so many inkers. But it is expressive and the layouts quite creative, except for the layout of the cover which absolutely sucks. So all in all, not a great story arc, not my favorite iteration of Doctor Strange, not recommended. Maybe in September, when a new arc begins that will ostensibly* coincide with the November 4 release of the Doctor Strange movie, things will become more interesting. But unlike the sycophantic monks at the Himalayan monastery, I don’t have faith.
*That is, unless, the whole thing is renumbered and rejiggered after Marvel’s October event, or whatever.
Bits and Pieces:

The finale of "The Last Days of Magic" ends less like an awesome Doug Henning spectacle of fireworks and bejeweled albino beasts, and more like a creepy David Blaine card trick on the street that makes you feel cheated. There really are no great developments in this issue

that required a four-issue build-up, and the conclusion casts Doctor Strange in a less sympathetic light than before. This comic's saving grace is its artwork, which is sort of like an ethereal graffiti that is rich in texture. That alone is not worth the cover price.