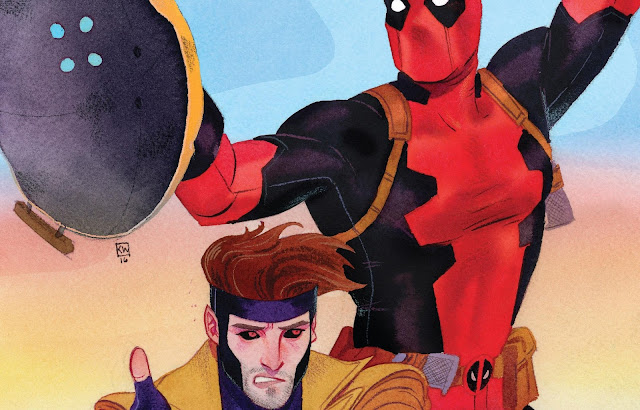 How I Spent My Summer Vacation.......Getting My Ass Kicked 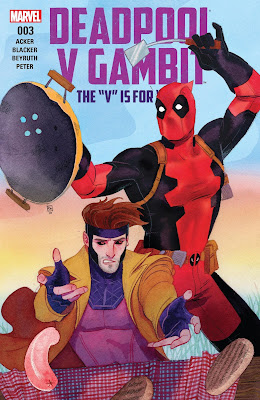 Written By: Ben Acker, Ben Blacker
Art By: Danilo Beyruth, Cris Peter, Joe Sabino
Cover Price: $3.99
Release Date: August 3, 2016
*Non Spoilers and Score At The Bottom*
While a title called Deadpool V Gambit should be nonstop fun for all ages.......... depending on how bad your parents are....... buncha youngins........... so while it should be this rip roaring ride, with laughs abound, I found myself not really having a good time in the previous issue as we explored the con at play and how our title characters planned on stealing the Jade Tongue from their fat mark, who in actuality was a big bad mama jamma known as Fat Cobra, who apparently kicked the shit out of Iron Fist in the past, so you know he means business.  With the tongue successfully stolen though, we saw Raul Chalmers screw our heroes over and we left that issue with Fat Cobra coming to Deadpool for a little payback, while Chalmers hightailed it.  Let's jump into this issue and see how our duo spent their respective nights and who had the least amount of fun.  Let's check it out.

A guide to male enhancement – Tacklin…
How to Start a Profitable Internet Bu…
QUILTsocial Giveaway 280: Kayana 12-F…
Relaxation Techniques To Reduce Stres…
How Many Days In Bali Is Enough? {The…
Explain It!:
Our issue begins with....... and sticks with for awhile, Deadpool telling Gambit and us how he spent all night getting his ass handed to him by Fat Cobra and while it was one of the most painful experiences of his life, what with his healing factor not kicking in, it was also one of the most beautiful because goddamn, that fat man could move.  This bit of info about Deadpool's powers not working leads to Remy telling us about how he spent all night being the meat of a hottie club sandwich, but after he was good and spent and the ladies were passed out to the point that he could sneak out without saying goodbye, Gambit went and did the dumb shit by kissing one of their hands and to his surprise.......... He kinetically charged her goddamn hand.  Yeah, it seems that our heroes' powers are going a bit wonky now and since he wasn't able to call back the charge........ well, it looks like double hand jobs aren't in this woman's future. 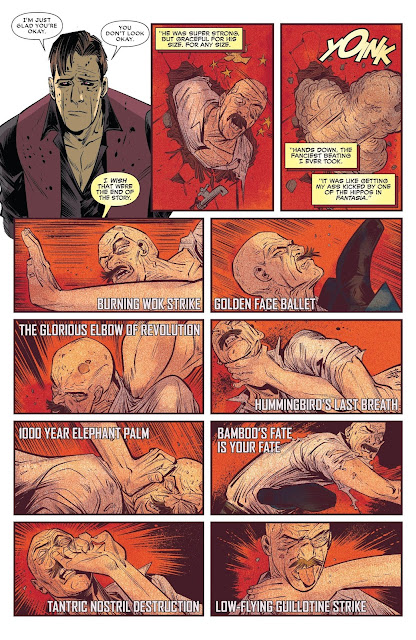 After Remy concludes his story about stealing a car to get her to the hospital and then being confronted by some ninjas on the way back to Deadpool, Remy realizes that the perpetrator behind their power loss must be the super villain Scrambler............. who scrambles powers and the really forced reason that it must be him is because Raul Chalmers and him sold him a shitty piece of property in the past.  This leads our heroes to go hunt Scrambler down, but they should have checked his Facebook for events that day because when they arrive at his residence, it seems that he's having himself a super villain barbecue........ which leads to Remy having to kick a little ass and take some names on his own, since Deadpool is still all messed up and really, doesn't like Gambit all that much right now for not being there to back him up when Fat Cobra tenderized the shit out of him. 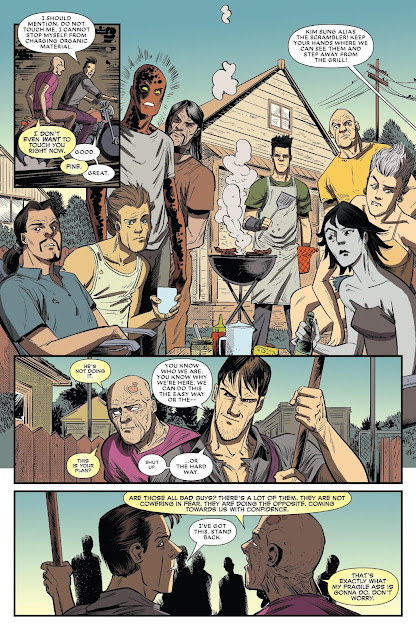 In the end, the fight concludes when Fat Cobra just shows up out of nowhere and just loves our title characters because he heard about everything Remy went through to get the girl to the hospital........ because now it seems that she's one of Fat Cobra's ninjas.......... and has her hand again....... I think. It's all very weird, but with the hate and ass kicking put aside for the moment, Fat Cobra is going to give Deadpool and Gambit a chance to retrieve the Jade Tongue for him, but since his intervention allowed the Scrambler to get away it might be kind of tough for Remy, but in the case of Deadpool........ Well, Deadpool might be alright because Fat Cobra bestows on him the Grace of K'un Lun, which makes him look like the bastard child of Deadpool and Iron Fist. 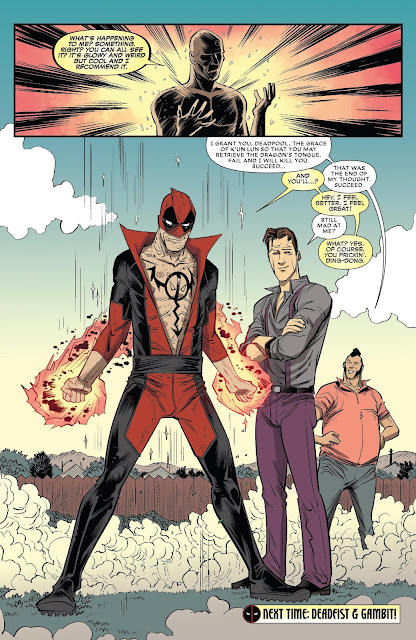 That's it for this issue of Deadpool V Gambit and for how low I was on the previous issue I have to say that this installment was a lot more fun and just plain off the wall, especially since we took a good portion of this issue just detailing how bad Deadpool got his ass kicked........ which sounds ridiculous...... which it was, but in a good way.  Yeah, the whole mystical turn of this series was a surprise to me because I find it tough to get into those types of stories, but it seems that we have clear goals ahead of us for what our heroes want to do and that gets me excited because I had no idea how a heist book for six issues with these two characters was going to work and now I don't have to worry about it.  It's all about getting the Jade Tongue and about getting their powers back and that sounds like something that I can get behind.  With all that going on, plus the comedy that seems to be back on point this issue, we had some great art depicting this story and I'm happy to say that I again look forward to this series and can't wait to see where it goes.
Bits and Pieces:
While I was a bit down the previous issue, I have to say that this installment really picked up the story and even the humor that I was looking for from a title like this and now that our focus is clear cut I can't wait to see what kind of trouble Deadpool and Gambit get into as they try to make themselves whole again........ and maybe get a little payback for being screwed over...... again.  A fun story with great art...... so really, what are you waiting for?
7.5/10