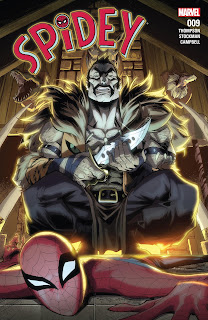 *Non Spoilers and Score At The Bottom*
Well, this month flew right on by, because we're back to see how this young version of our favorite
web-slinger is doing. Last time, he had a date(maybe) with Gwen Stacy… Which was then ruined by the sudden, shocking return of Electro. While Peter was able to defeat the starfish-faced villain, Electro was soon freed by five other villains: The Vulture, Mysterio, Sandman, Kraven the Hunter, and Doctor Octopus, who offers him a position on their new team.

The moment I saw the Sinister Six on the final page of the previous issue, I became super excited for this one… Though I should have guessed the Sinister Six would be at the end of this volume. No, this issue apparently has Peter are going up against the second member of the group, Kraven the Hunter. I'm not complaining; Kraven is one of the cooler members of the Sinister Six, and it's been forever since I've seen him fighting against Spider-man. So why is the Hunter going after Spider-man this time? How will it affect Peter's everyday life? Well, let's dive in and find out!


We open with a sight that everybody has probably seen before, whether you are a long time spider-fan or someone who just watched the Tobey Maguire movies: J Jonah Jameson ordering Peter to get out of his office after asking for a raise. Peter gets bummed by the refusal as Aunt May's Birthday is coming up, and as a high schooler, he isn't exactly rolling in dinero for a gift. Before he leaves to try and find a cheap but meaningful gift for the best aunt in comics, Peter drops off an old film reel that he found at the photo lab, curious about what was on it. 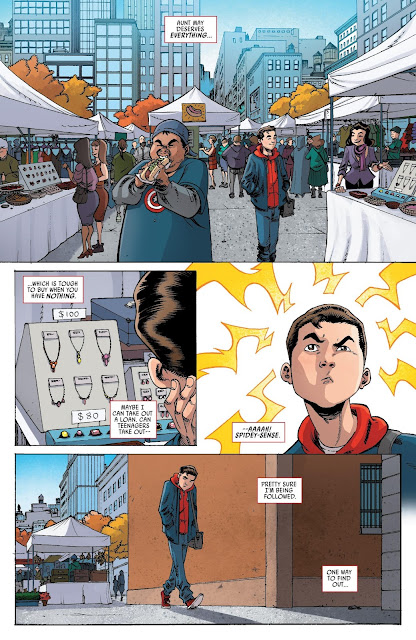 After Peter left, J Jonah Jameson gets an unexpected visitor… Kraven the Hunter, demanding to know who took the pictures of Spiderman. Now if this was any other newspaper editor, I would call bull crap on the reaction he gets from J Jonah Jameson... But as I said, it's JJJ. He shrugs off the Hunter and tells him that Peter Parker took the pictures of Spiderman, and approves of Kraven trying to hunt the Webslinger down. Kraven then leaves to go find Parker. As humorous as it is to have these two talking to one another, I have two problems with this scene.
1: How did Kraven get in and out of the Daily Bugle? This apparently isn't his first time fighting Spider-man, so he should be a criminal wanted by the police. Is he really convicted of anything? Does the bugle have terrible security?(probably this)
2: I know he doesn't like him, but would JJJ really sell out any employee like he did to Peter?! I mean we don't see any other photographers for the bugle, and he just sent a hunter/criminal after a teenage boy! 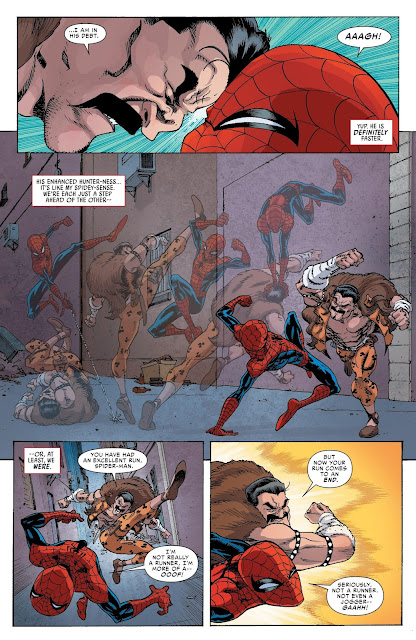 Kraven follows Parker through a Street market, but Peter senses him pretty early on and leads him to an alley so he can jump him as Spider-man.

The fight is actually pretty exciting, even without the flashiness of superpowers. For a new Spiderman reader, it shows off the skill Kraven has in comparison to the more popular heroes like Doctor Octopus as he can keep up with Spider-man, even though the hero has spider sense. However, Spider-man also realizes that Kraven is pulling his punches, which distracts him long enough for The Hunter to get one over on him. However, before Kraven can deliver the final blow on Spider-man, our favorite webhead decides to distract him... BY FLASHING HIM!

I'm kidding. Spiderman uses the spider-signal light on his belt to blind Kraven. The way he's positioned though made me take pause for second as it looked a little bit suggestive. I love Nate Stockman's art of Spidey, especially during the fight sequence, but this panel… Maybe it's just my mind, I don't know. 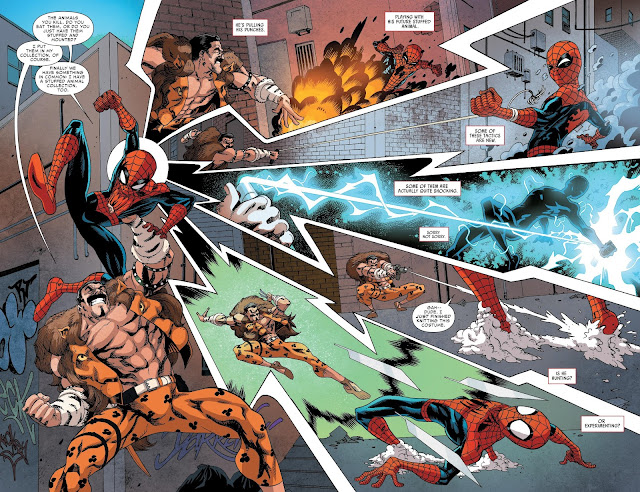 Anyway, Spidey webs up The Hunter, but he escaped when his back is turned. Turns out Kraven was sent by Doctor Octopus to fight Spider-man to see what he was capable of. According to his analysis, Doc Ock believes that Spiderman is as fast and as strong as ever, which will make him an even bigger challenge, but he needs to run a few more scenarios… He sends Kraven off to rest, promising he will get a second chance at him soon.

In the end, Peter tries to get money for pictures, but JJJ is furious at the fact that Parker didn't get any pictures of the Kraven/Spiderman fight, and refuses to pay him. Feeling defeated at the fact he now can't pay for a gift for Aunt May, he goes down to the photo lab to check on the roll he left behind. There he finds out the roll had a few good pictures, including the perfect gift for Aunt May: a picture of him, May and Uncle Ben during Peter's first night at their home. He gives it to Aunt May...and she friggin loves it... I swear I'm not crying.

While not my favorite issue, I still had fun with this installment of spite. There was comedy, action, a little bit of heart; everything that a great issue needs. The only thing that is bringing it down is the small plot holes and that one panel that gave me pause during the Kraven fight. Either way, I still think it's worth a look.
8/10