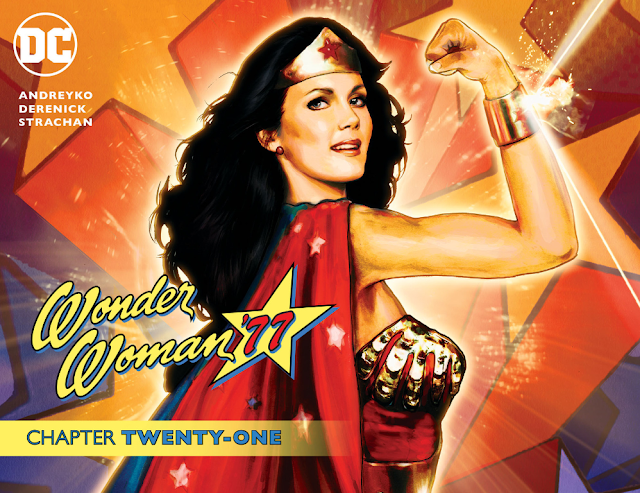 Signs That You’re In A Healthy Love R…
‘The Angry Cabbage’. A Vegetable Rese…
Best Story-Rich Games on PC: November…
Beautiful Celebrity Couple Pics
12 tips to Overcome Frustration and A…
Ahh, I’ve finally finished all of my comic book reviews for the week, editing Cosmic Treadmill (each week on the Weird Science DC Comics Podcast!) and Weird Comics History (new episodes on the Weird Science DC Comics Podcast feed every Sunday morning!), checked the vacuum-sealed room that contains my mint-condition Binky and his Buddies collection, and fed my deformed, feral brother some raw meat as proscribed by the witch’s curse that condemned him. Time to sit back, relax, and enjoy the fruits of my labors, no comics to think abou…what’s this? A new chapter of Wonder Woman ’77 sneak-dropped last Friday? To be fair, I had heard that new chapters were coming, but I didn’t think it was going to be this soon. Mea culpa! I will get right back to the only task I’m worth, good masters: reviewing comics that no one else will! So read on!
Explain It!
Our yarn opens at the Cyberdynamic Labs in Maryland, where two old dudes—or dudes in old dude masks—are fleeing the scene with a heavy sack of what I must only assume are ill-gotten cyberdynamic parts. A guard (remembering his training) steps from around the corner and fires his gun on the robbers, shooting one in the stomach and the other in the shoulder. The one with the more superficial wound calls the guard a fool, denoting him as a supervillain of some stripe, and then uses some kind of invisible force to seen him careening. The thieves escape, the one with Jedi powers helping the one that got gut shot. At…I guess FBI headquarters? Steve Trevor and Diana Prince are going over some security footage of the crime, and Diana notices something through one of the eyeholes in the less-wounded crook’s mask: the eye-stalk of bodiless brain, Harlow Gault! 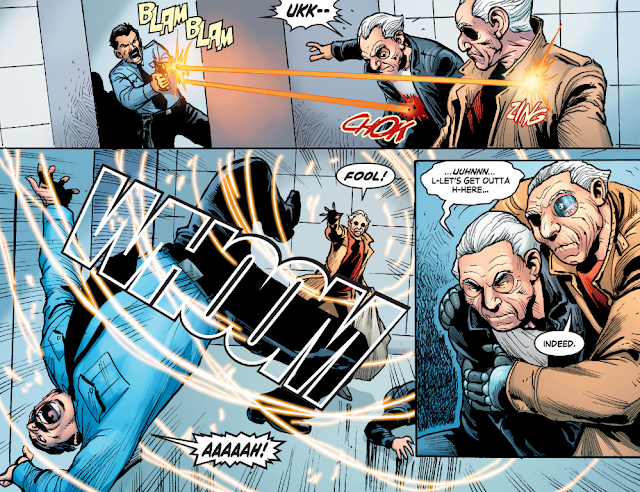 Surely you remember Harlow Gault, don’t you? He was the floating brain in what looked like a nineteenth-century fire pump that sought to find the perfect body in an Olympic athlete. Episode twelve of season three? Aired in 1978? Well, neither did I, until I looked it up. Luckily, the comic does a great job recapping the episode, at least the parts pertinent to this story, so you don’t need to have ever watched the Wonder Woman television show to follow along—though, after reading about Harlow Gault, you are probably going to want to watch this episode. He escaped at the end of that program and he’s back again, in a new robotic body that is much more mobile and humanoid, besides looking a lot like Bender from Futurama. We know this because we cut to Gault’s lair, where he is going over his pilfered robot parts while some lady looks after the severely wounded non-robot guy. I can only assume they are being compelled to work for Gault by use of his telekinesis, because he treats them both like dirt, but after the woman insists he allows the dying dude to be dropped off at a hospital—but only after he wipes his mind completely! 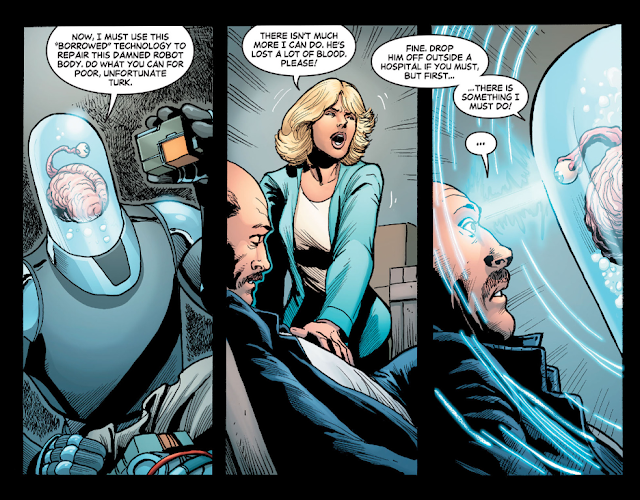 At the hospital, Wonder Woman and Steve Trevor are visiting the recuperating criminal, who can’t tell them much because his mind is blank. Now wait, does he even know language? Will he have to re-learn using the bathroom and stuff? This is what I never understood about amnesia, at least as depicted on television: they’d lose every memory accrued up until the point of getting bonked on the head or whatever, but they didn’t forget how to speak or walk or deal with the lecherous jerk working the register at the corner store. To coax this guy into speaking, Wonder Woman wraps her golden lasso around his arm, and he gives up the location of Gault’s hideout. Wonder Woman and Steve descend on the abandoned warehouse with a team of special agents, that spirit away Gault’s mind-controlled lady helper, I guess secure the area too. Wondy and Steve try to sneak up on Gault, but he turns around like FOOLS! and blasts them back with a sick mind wave. There’s a tussle where Steve and Wonder Woman struggle to get at Gault, which ultimately results in the bubble containing Gault’s brain cracking open and spilling its contents! But where could the brain be? You don’t think…I’m going to make you pay a buck to find out??? 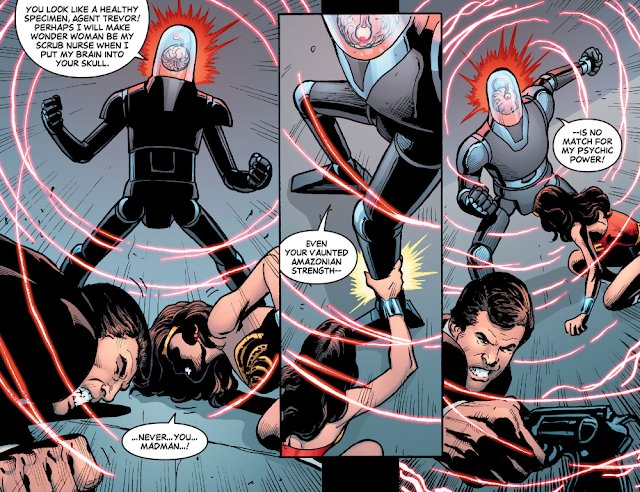 Yep, because this was a really fun, well-drawn story that is worth reading. No disrespect to the epic story Greg Rucka is building over in the DCU, but I just love these Wonder Woman ’77 chapters because you can dive right into the deep end. If a villainous brain in a jar isn’t enough to entice you to give this comic a look, then we don’t understand each other at all. The rest of us normal people who know the value of a crusading Amazon fighting a telekinetic robot will enjoy our comics, like regular folks.
Bits and Pieces:

A nemesis from the Wonder Woman television show makes a comeback in this chapter, but you won't need to have watched a single episode to jump right in and follow along. And trust me, you're going to want to follow along. The art is lively and expressive, and the story is so much fun with not a lot of filler. You can't beat it for a buck!