Poison Ivy: Cycle of Life and Death #5 Review and **SPOILERS** 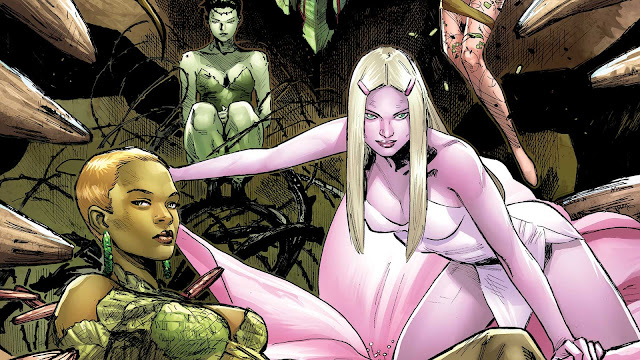 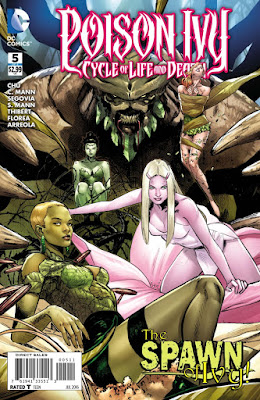 30 Cheap & High ROI Home Renovations …
Well said Mr. PM, We’re racing with t…
Pineapple juice benefits for skin
What You Need to Know About Sydney Ep…
5 Foods to Avoid in Your Diet for Bet…
**NON SPOILERS AND SCORE AT THE BOTTOM**
Oh boy! Here we are, one issue away from the conclusion to Poison Ivy, and we’re sure to get some answers to our burning questions now! For instance: what is happening? Also: why? There have been some cool scenes in this series, but by and large I am at a total loss. And I can understand some of the mystery, yet I also feel I should understand more about Poison Ivy’s reasoning for growing a couple of Cabbage Patch Kids at home, or why Gotham City Botanical Gardens had an entirely abandoned wing, or even why the Botanical Gardens has such a large permanent structure at all. Is this a public attraction or a flower fortress? Was it super-popular until video games took root, and then they had to scale back the operation by leaving one-fifth of the place derelict? How much money is allocated to the Botanical Gardens, anyway? Clearly I am hoping that this issue will consist mainly of a public forum and budget planning by local city government. Do I get my wish, or do we see another comic about a hot lady with plant powers? Read on to find out!
Explain It!
Kids: they grow up so fast, don’t they? Especially when they are plant/animal hybrid children created in a laboratory using Pamela “Poison Ivy” Isley’s sixteen secret herbs and spices. Since last issue, Pamela’s fern babies and the creepy girl rescued from the mad scientists’ division of the Gotham City Botanical Gardens have matured into teenagers, which means that they are now the most horrible life forms on earth. Oh, and they have plant powers, you say? I didn’t even know that. The Green teens Hazel, Rose and Thorn are being held virtually captive by Pamela, lest they mingle with the normal world and start wanting to wear makeup. Of course, these are troubled kids, particularly the newly-adopted Thorn, who has the power to turn people into Groot just by touching them. Pamela, the ever withholding mother figure, silently ruminates on that and everything that’s happened in the series so far, highlighting what we do know: there’s a bunch of dead people and a weird monster that broke into her apartment a couple of issues ago, and what we do not know: everything else. Pamela is roused from her reverie, however, when Darhsan shows up with a karaoke machine and belts out a few tunes with the girls, because that’s better than ending the scene with a pratfall. 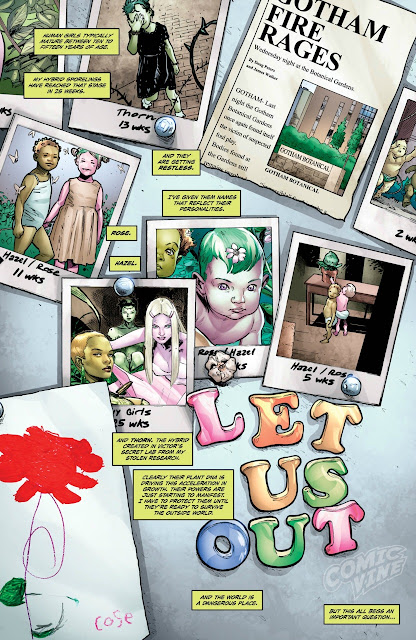 That evening, while Pamela sleeps, her hothouse family disables the plant-based alarms (probably should have picked something they can’t control with their minds to restrain the ladies) and steps forth into the dangerous night. This brings them to fake Times Square and a strip club called Bang Bang Alley, which is the third most popular strip club in Gotham City after Fuck Spot and Quimview. Inside, Rose and Hazel get up on stage and start pole-dancing—the innate, natural skill of any teenaged girl—while Thorn goes to the bar for some water. A skeevy guy offers her a drink of whiskey, which she doesn’t like, then touches her butt, which she really doesn’t like, so Thorn grabs his hand and turns it into tree bark. This naturally freaks everyone out and attracts the notice of crackerjack cops O’Shea and Manning, the very same guys who roped off two crime scenes at the Botanical Gardens and then let everyone traipse all through them while conducting almost no interviews and garnering no suspects. They head down to Bang Bang Alley, and Thorn immediately captures them in her thorny vines (so that’swhere the name comes from!) Just then, Poison Ivy shows up and gives the girls that mom look that gets them to cut the shit and come home quietly, after destroying a few cop cars and brainwashing some officers with pheromones. “No casualties,” warns Poison Ivy, though she has killed at least one person per issue up to this point. As the Ivy family returns to her apartment, weird shadowed mystery beast looks on, muttering “Sssporelings…” in that trademark goopy green word balloon that seems all the rage for the plant-based set. 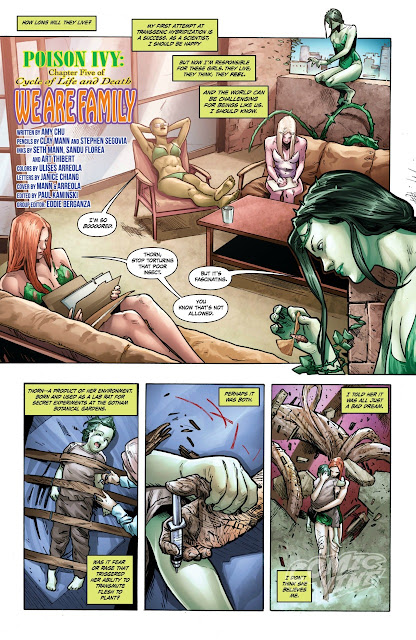 Back home, Pamela gives the girls what-for, then grounds them by ensaring them in a giant birdcage made from vines and roots and stuff. Didn’t this not work before? I mean, these girls have plant powers, seems like the best bet to punish them is to not surround them with plants. And then the thing that really confused me happens: Poison Ivy contacts the Green. For those that have not read Swamp Thing, the Green is sort of the ethereal August body of plant law, a force represented by the Parliament of Trees, who pick an avatar to represent their interests on earth while they remain in the realm of metaphysical concept. Their avatar, currently, is the Swamp Thing, an appointment that has its own problems. Poison Ivy being able to hang out in the Green and speak to it, though referenced earlier in the series, seems incongruous to me. I mean, yeah—she’s got plant-based abilities, but she’s not an ambassador of the Green. She’s just someone leeching off its stored power, like the Floronic Man. And Pamela says that only she and Alec Holland (aka the Swamp Thing) can contact the Green, but what about Black Orchid? She was running around with the Justice League Dark a few years back, so it’s not like she doesn’t exist in this continuity. While chit-chatting with the Green, however, Pamela is beset in the real world by whatever shadowy beast monster had been tracking them earlier, or maybe this happened in the Green. I’m too tired from a night of strip club partying to figure it out. 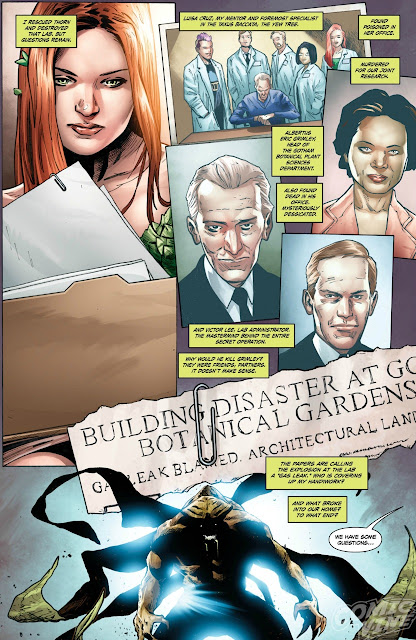 This series is really like three separate stories happening on their own timelines: the mystery of the murdered Botanical Gardens employees, the case of the teenage mutant hibiscus girls, and the puzzle of the leafy beast in shadows that keeps stalking Ivy and her clique. Oh, and whatever the hell is up with Darshan and why he seems to be on hand for everyone’s death. Also why Poison Ivy can hang out in the Green all of a sudden. There’s just a lot we don’t know, and one issue to discover it all, which means we’re likely in for a sixth-issue infodump that will contain roughly twenty-thousand words of dialogue. And the worst part about it is that I feel no impetus to root for any of the characters, each of them assholes or sneaky jerks in their own right. On the plus side, Clay Mann is back on art, but the inking is a lot better so the work looks more lush and full. The layouts are really great in this comic, damning it with faint praise. Really, we’ve come too far in this series for me to be so lost and disenchanted with the characters involved, unless the object of this book is to make me care less about Poison Ivy than I did before. In that case: mission accomplished! 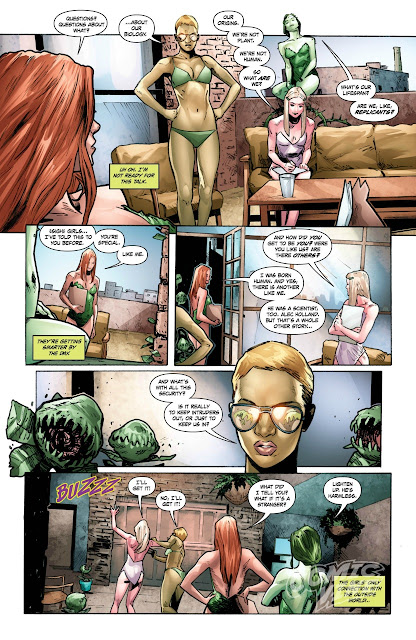 Poison Ivy's hybrid leaf babies and newly-adopted lab experiment have matured into teenagers, and you know what that means! GIRLS NIGHT! Which, in modern terms, would actually mean three ladies ignoring each other and staring into their smart phones all evening, but for these cloistered chickadees means they are gonna step out and be fierce! Poison Ivy does go all "mom" on them, then consults with a formless power that I didn't even know she was friendly with. In all, this story has developed like something tumbling down a flight of stairs, and I find myself less and less invested in the characters as it continues. One more issue to wrap it all up, and from the loose threads still dangling I expect it will be text-only.

Poison Ivy: Cycle of Life and Death #5 Review and **SPOILERS**