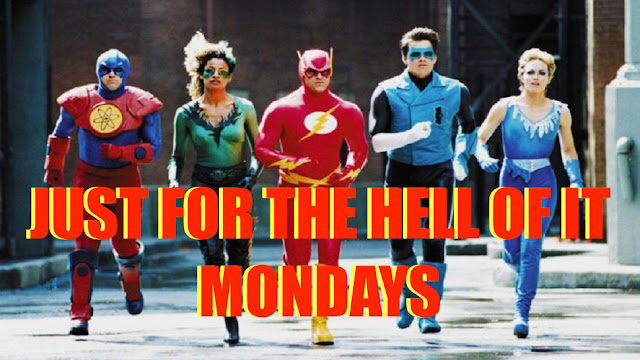 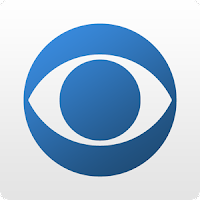 Sometimes the most interesting thing about a given creative work is how wildly the end result differs from the initial idea. We call this the “artistic process,” a phrase that makes it all seem like the natural outgrowth of self-expression and craft, but just as often decisions about a final work must be predicated on things like funding, available time, and actual talent. Yet this pilot for Justice League of America from 1997 seems to have veered from the comics that inspired it in senseless ways—why, for instance, have the vocations of various characters changed? Why is Barry Allen a chubby, unemployed dude? Why does Guy Gardner sing opera? I don’t know if there are any answers, but if there are any to be found then Chris Sheehan from chrisisoninfiniteearths.blogspot.com will find ‘em! Tuck into Part Two (Part One can be found here) of his painstaking dissection of the pilot—and only—episode of CBS’ Justice League of America! Read on!

Sobriety In The Time of Quarantine: T…
ما هي العدالة الانتقالية
Coach Depression sent in the play, wh…
Cryptoqueen Vanishes Leaving A Pitch …
5 Ways To Share Your Skills With Othe…
When we last left our heroes they had just thwarted the sinister Weatherman's plot against New Metro. With all those super heroic (and arguably interesting) antics behind us, we now get to experience the "softer side" of the gang...
We learn that not only do Guy and Ray team together, but they're also shacked up.  Stands to reason I guess...couldn't expect Ray to afford his own place on a teacher's salary. All seems comfy until...come and knock on our door...Barry moves in. Never has a table been set so quickly.

The gang sits down to eat, but wouldn'tcha know it...Barry's metabolism is on the fritz, and he inhales the dinner himself.  The fellas are shortly joined by B.B., who didn't get the part she'd auditioned for, but almost got a teenage boyfriend for her troubles. It is during this scene that it's implied that not only were Guy and B.B. an item at one point...but it's heavily suggested that Bea faked all of her orgasms during their relationship.
We rejoin the erstwhile Tori Olafsdotter as she bumbles about the meteorological facility. Here we meet the likely villain of this story.  A secretive scientist-type called Arliss who only works at night so that they don't have to deal with lookie-loos.  Tori weasels her way by him and into a lab where she promptly makes a mess of everything.  She happens across a hidden steel briefcase, and decides it'd probably be a bang up idea to see what's inside.

Ya see...this be her Secret Origin. She finds that she has that magic touch where she can freeze things.  She hurries home and comes across a totally awesome 90's dude who fell into the lake. Tori, already feeling some "hero pangs" steps into the water...and immediately freezes the entire lake.  Somehow this doesn't kill the poor almost-drowning victim, who instead just gives off a Joey Lawrence style "Whoa..."
This occurrence makes local news, and lucky for the League the report begins just as their television set gets repaired.  The quartet watch, and upon seeing young Tori among the "witnesses" we get the feeling Ray's getting some feelings he will have to soon deal with in private.
That night, Tori gets abducted from her bed. You may think it's the Wacky Weatherman behind the kidnapping...but, in actuality it is the League. They fill her perky little lungs full of gas and take her to an undisclosed location to read her the riot act. Ya see, they believe she may just be the Weatherman. A League appears to be acting on the direction of a disembodied voice, which is sure to be important as we move forward.
We next find Tori back in her bed, the victim of what can only be called the Metahuman version of a nocturnal emission. Luckily for dear girl this is only a wet dream about a wet dream. 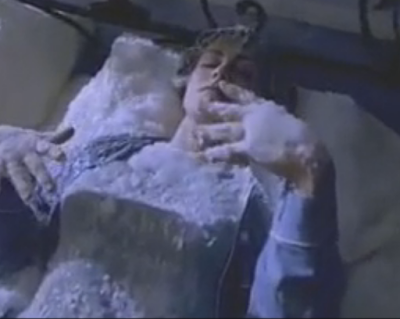 The next morning, Tori offers that she is a bit suspicious of shady Arliss when speaking with Miguel Ferrer. I'm just now realizing that his character is called Dr. Eno, so I guess I ought to refer to him as such from this point forward. His body appears to stiffen up (nyuk nyuk) while talking to Tori, and so he excuses himself. Outside he pretends to tie his shoe, and we notice that all is not quite as it seems. 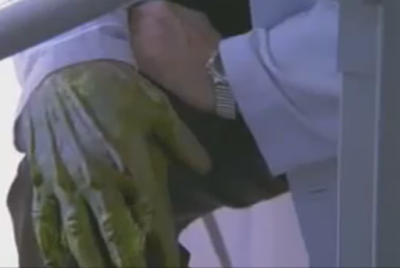 We rejoin Fire as she is wooed by a phony French film director...who in actuality is the same teenage admirer from earlier. He more or less admits to stalking Ms. Da Costa, which she handles surprisingly well. She appears flattered and promises to call him when she next gets the opportunity.  Man, I guess I was totally wrong on how to get women. I guess after faking-it with Guy for so long she's entitled...to being the next decomposing head in this loon's refrigerator.
Speaking of Guy, he's currently attempting to once more make good with his neglected girlfriend. Just as he appears to be making some headway...the Weatherman strikes again!  This time with a blizzard of ping-pong balls!

Guy rescues his girlfriend from getting smashed by the balls.  We get the feeling that there's Guy--whatever his girlfriend's name is--Green Lantern love triangle in the making. Atom and Flash arrive on the scene, and the three fellas watch as Fire blasts the clouds with her powers. The day is once again saved!
Back at the apartment...er, headquarters, the team is huddled around and receiving orders from their television set. They are told to keep an eye on this Arliss fella. It seems like they were considering "drafting" Tori into their ranks anyway (just get some uncontrollable powers? wanna save the world?), so why not kill two birds with one stone?
The gang infiltrates Eno's facility posing as guests to some gala event they're holding. Here they both meet with Tori, and get a better look at Arliss. Arliss is acting all sorts of shifty, and is trying to smuggle a box out of the building. The League puts the Flash on his tail and follow him to a suburban home. Flash confronts the geek, accuses him of being the Wascally Weatherman and checks out the contents of the box for himself. 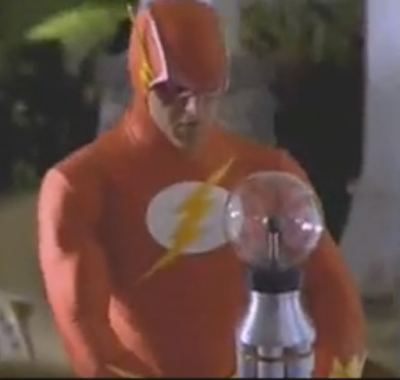 Turns out Arliss is just a harmless introvert. His big top-secret invention is just a weather predictor (right up to 88% of the time, as of this writing). With the good name of Arliss cleared, it appears as though our heroes are back to square one.  Just who is the nefarious Weatherman?

In addition to answering that question, one can only hope we get some resolution to other burning issues such as...will Barry ever get a job? Is Guy any good in bed? Will B.B. get popped for statutory? When we conclude our look into the failed Justice League of Americapilot.
You can read a new DC comic book review by Chris Sheehan each and every day on chrisisoninfiniteearths.blogspot.com, and follow him on Twitter @AceComics!