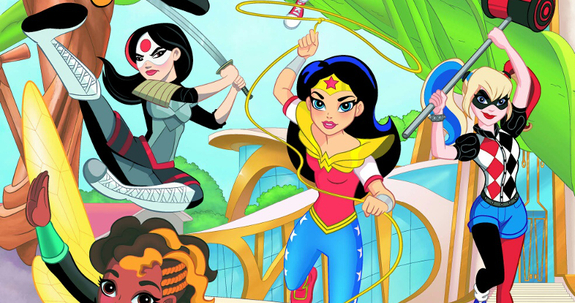 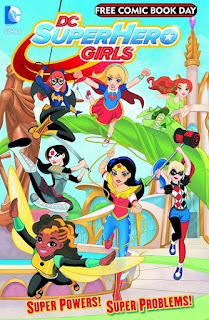 Good old Free Comic Book Day!  The chance for people to get out of their house, head to their local comic shop and get free stuff.  While I have some differences with my local shop owner, I always head over and pick up some free comics and while I joke on the podcast that it's not "buy comics day", I always buy a couple of things as well.  The best part of the day, however, is taking my two youngest sons with me.  This is the third year we've gone and I am very happy to say that my ten year old son, Logan, looks like he has taken the bait and has read everything he picked up...some of them twice.  One of those comics he read (only once) is the one we are focusing on here, DC Superhero Girls FCB #1.  I will be including some of his thoughts as I go along with my review.  So, here we go...

"I wish I could go to superhero school"
The issue starts off with some action.  Wonder Woman is fighting it out with Cheetah, but this is a comic for the kiddies, so it all ends up being part of Coach Wildcat's P.E. class and with that, I was in.  I always enjoy reading comics with little kid versions of our favorite superheroes, not for the main characters, but for who the writers throw in as the adults.  That's one of the main reasons I still love the Tiny Titans comic (Deathstroke as the principle and Monitor as the hall monitor...genius!) and why this one did put a smile on my face right away.

That continues after we meet some of the main characters (and see some even better ones in the background) when an assembly is called by Principle Waller and Vice Principle Grodd.  Waller reminds everyone that finals are the next morning and that's when the main story begins.
"Little kids can't just drop out of school"
Supergirl has a really bad history with final exams (preaching to the choir Kara!) and after the assembly, instead of heading to Mister Crazy Quilt's (I love that it's not not Mr. Quilt) Intro to Super-Suits class, she just flies off.  I agree with Logan, kid's can't just leave school like that, but it does lead to what we both think is the best part of the issue so I will give it a pass.  It was almost a deal breaker with my son, but he eventually came around as well.  Why?  Because Kara heads to Smallville to visit the Kent's farm.
"Why didn't Supergirl fly when she was on Krypton?"
When Supergirl gets to the farm she "runs into" her aunt and uncle (and the barn!) and begins explaining the huge danger she is running from...Finals.  We see that this fear goes back to her younger days on Krypton and it not only involves tests, but some bullies as well.  She had it tough, but the whole time I kept thinking, "Don't worry Kara, all those people are dead!"  Pretty dark and awful of me, but it leads me to another reason why I like books like this...it gives the kid's reading it a little comic history and if my son's any indication, the questions start coming fast and furious.  We talked about Krypton and Supergirl and Superman and it even lead to a discussion about how Batman doesn't have powers, but still can beat up Superman...I disagree, but hey, that's the fun of it all.  Of course, the Kent's give Kara great advice and she heads back to school.  Unfortunately, as the book ends, we see that tests are the least of her problems.
"It's not as much of a girl's book as I thought"
As a Free Comic Book Day offering, this comic book makes a whole lot of sense as a tie-in to DC Comics' female-friendly merchandising line, but more specifically, as a sneak peek at the upcoming graphic novel Finals Crisis, coming in July.  Still, throwing all the marketing and business plans aside, it's a nice little comic geared towards younger kids who sadly, don't have a ton of choices nowadays.  Shea Fontana does a good job of keeping everything fast and simple, but still gives us a fun story that teaches a good lesson along with dropping some comic knowledge.  While this book and the property it's based off of is supposed to be for younger girls, I think it will put a smile on anyone who reads it.
The art team of Yancey Labat, Monica Kubina and Janice Chiang do an excellent job recreating the look of the DC Superhero Girls shorts.  I know this because I went and watched them before and after reading the issue.  The character's are the focal point which is great because they are awesome in their adorableness.  Both Logan and myself agreed that our favorite was Mr. Crazy Quilt!
Bits and Pieces:
DC Superhero Girls Free Comic Book Day 2016 #1 Review may be a long title, but it was a quick read that everyone can enjoy.  The story tells a lesson, but it's not forced and having it told through Supergirl makes it that more enjoyable.  The art is great and even after reading the story, me and my son paged through the issue and pointed out all awesome characters.  I guess the issue did it's job because i am now looking froward to the Finals Crisis graphic novel coming out this summer.  Logan is too!  He gave the issue a 6, then an 8 and then settled on a 8.5/10.  I give it a...
9.0/10