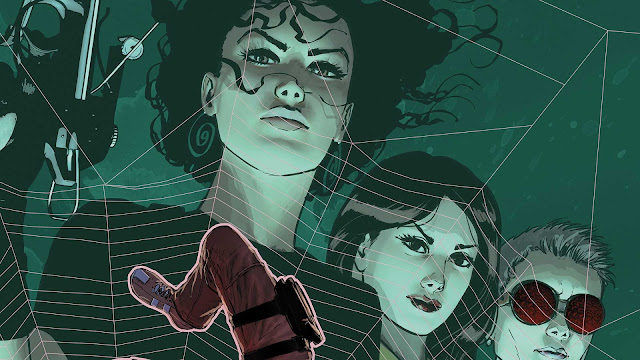 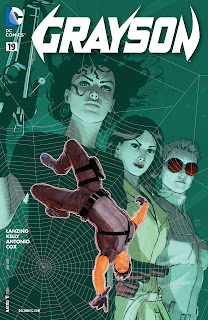 I have gone on record more times then I can count (>3) that Grayson was one of the best books of the New 52/DC You and that it was a shame that a bunch of Nightwing fans sat it out in protest.  Sure, the name had changed, but the song remained the same and that song was not Stairway to Heaven or even Since I've Been Loving You.  Nope, that song was...let me think of something clever...I got nothing.  Wait, how about, "Dick Grayson's super power is being a nice guy and we are getting that in spades here."  I know it's a long title, but if we give it a catchy chorus, I think it could catch on.  Besides trying to become the next Katy Perry, I just want everyone to know that this series was great and I think everyone should give it a try.  I did say "was" and while that might sound harsh, having Tom King (and Tim Seeley to a lesser degree) leave the book for newcomers Lanzing and Kelly to finish still feels wrong to me.  I know that they are only here to get to what will be the Nightwing reset called Rebirth, but I wish they would have let the original creative team finish what they started. However, like they say...If wishes and dreams were peaches and cream then we'd all shit rainbows.  They say that, right?  On to my review for Grayson #19...


The issue begins with a little Yeats, two gals being very upset at their father and an Icarus reference.  Now that is the start to...something.  It all continues with Dick, Tiger and Midnighter and Grayson comes across as the dumbest kid in class.  He seems to be the only one who doesn't know that everything that has been going on was a setup to Daedalus returning and Helena is the vessel.

While all hell seems to be coming down on Dick, Midnighter doors out because it isn't his scene (his words) and Dick and Tiger fight it out a bit while Maxwell Lord looks on.  I mentioned it last month, but could someone tell Roge Antonio to stop making Lord look so much like Grayson...it messed me up again.  I wish that was the only thing that confused me in this issue, but unfortunately, that was the tip of the iceberg.

It's a race to get to Helena and while Tiger is working for Checkmate and will do anything to stop Daedalus, Dick still has hopes of saving Helena.  Lanzing and Kelly do their best to keep the punches and quips coming fast and furious, but it all turns into a convoluted mess.

We see Daedalus and Luka in Germany and after some more poetry and a little betrayal, it seems as if the Netz sisters are no more.  That somehow leads to the continuing fight and chase of Dick and Tiger and again, their interaction is quipy, but in a way that is not funny or smart. 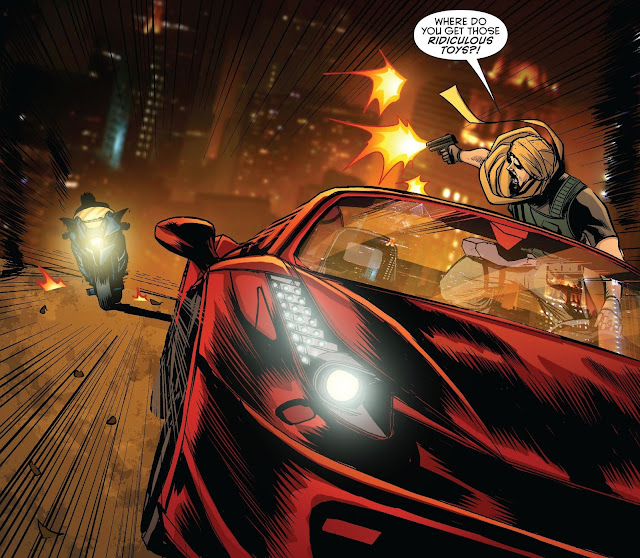 We finally get to something more interesting when we head back to Spyral and see that Frau Netz is barely alive, but has a final chance to be a hero...kind of.  It all goes back to the beginnings of the series when we were told that Grayson was going to be all about Spyral knowing the secret identities of the Justice League and everyone else.  She makes a choice that may not get her through the pearly gates, but stops a whole lot of disaster from happening later.

Back to Dick, after a little monologue (including an odd typo) nobody is surprised when Tiger shows up yet again.  Seriously, someone put on the sunglasses and stop this fight already!!!  Dick stops it for now, but we are left with Tiger promising more.  Great.

The issue ends with Grayson arriving at his destination and because of everything we've already seen and knew, it isn't shocking, exciting or anything much at all.  It's just the end of the penultimate issue of a series I used to love.

I really don't know what to say here.  I won't say that I hated this issue because I really was left feeling empty.  Empty, a little confused and a little sad that my favorite book was ending in a way that was unrecognizable to me.  I have been begging all the Nightwing fans to read this book since it came out, but I'm here to say that as it stands now, just wait for Rebirth.  Everything including the art is a shell of what it once was and yes, that makes me very sad.

Lanzing and Kelly were called on to end this series and get it to Rebirth and while they will certainly get that job done, I can't say it will be in style.  People are always saying to enjoy the journey, but I just want this to end.  Better yet, could we rewind and have Seeley, King and Janin end it months ago. This issue is a confusing mess that I can't recommend to anyone and is starting to make the Nightwing fans that have been yelling at me look very smart.  They aren't smart...they just look like it right now.