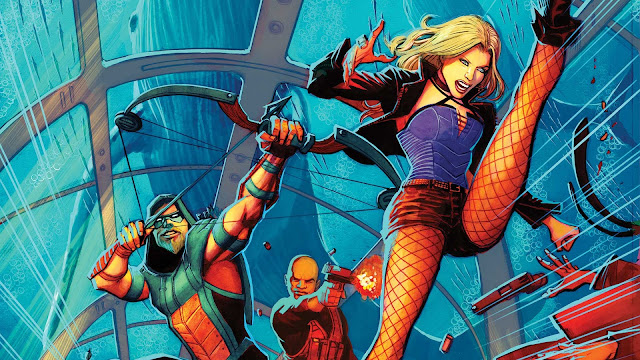 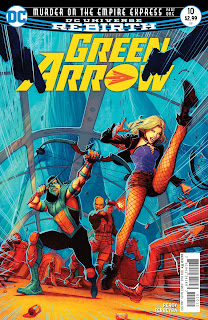 Ben Percy has spent the last bunch of issues focusing on his individual characters without pushing the
overall story ahead much.  Hopefully, that changes here with his “Murder On The Empire Express” story.  While the whole Trans Pacific Railway concept doesn't completely jive in my mind just yet, I am willing to see what it's all about and where it is going.  That being said, I am just glad to see Ollie, Dinah and Diggle together and with a little luck, Emiko won't be too far behind.  I'm all for this Team Arrow and can't wait to see how Ben Percy handles them.  Do I get to see any of that this issue and is it any good?  Let's find out...

Oh well, the big thing isn't the railway, but Ollie, Dinah and Diggle trying to get on board as it speeds past them.  They eventually do and the rest of the issue involves them trying to find each other as well as find out what's going on on board. 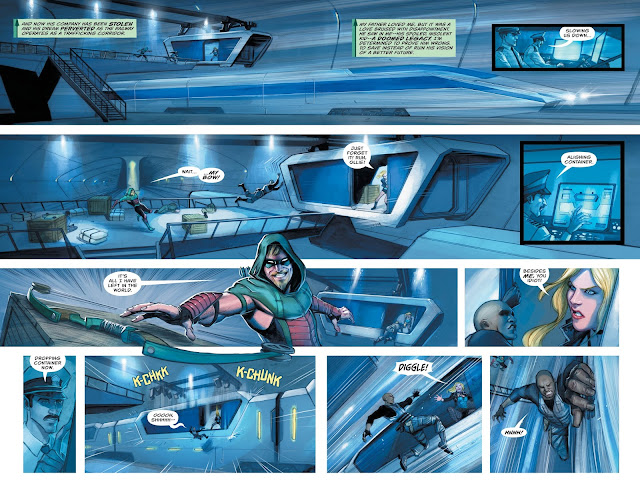 The railway itself seems on the up and up as a way to bring peace to the world.  I know that sounds hokey, but a man named Amin Mustafa is in charge and his goals feel genuine.  He also saves Dinah from a frisking so I trust him.  Meanwhile, Diggle runs into an old friend that he never met and Oliver makes his way through the train by himself.

As far as big moments go, Ollie has the best and while it really didn't mean much, it was such a great call out to Oliver's legacy and is something almost as popular as his facial hair. It's silly, but is great fun!

When Oliver finally catches up with Diggle, it's too late for Mustafa and even though Canary steps up with an awesome looking Cry, I'm sure there are even more casualties.  It's no surprise who the bad guy is and after we see that Oliver knows this piece of shit, it's lights out and tables turned.  The final progression was a little confusing, but it does set up a pretty cool beginning to next issue! 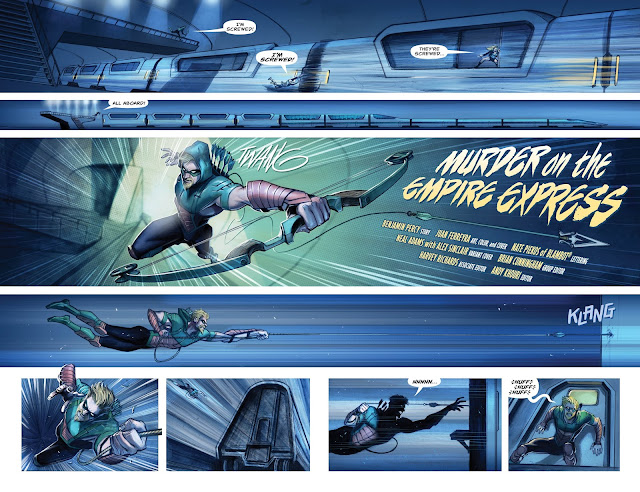 There is not a whole lot to this issue.  I found the whole Trans Pacific Railway a bit forced and the background to the "Express" was non existent and those two things combined with not much story didn't have me on the edge of my seat.  This is the first issue of the arc so I expect some setup, but this was paper thin.

One thing I did like a lot, however, was Juan Ferreyra's art.  Actually, I loved it (as usual) and can recommend the issue on art alone.  The full page of the Canary Cry is something that deserves to be signed, framed and displayed in your den...if you have a den.  Hopefully, if you do, it has shag carpeting.

Ben Percy starts another two part story and I already wish it was longer.  Not because I like it, but because it needed more setup and explanation.  I like the concept of murder mystery on a train full of dignitaries, but without any background, it falls flat.  I did love Juan Ferreyra's art, but in the end, I can't really recommend this issue.