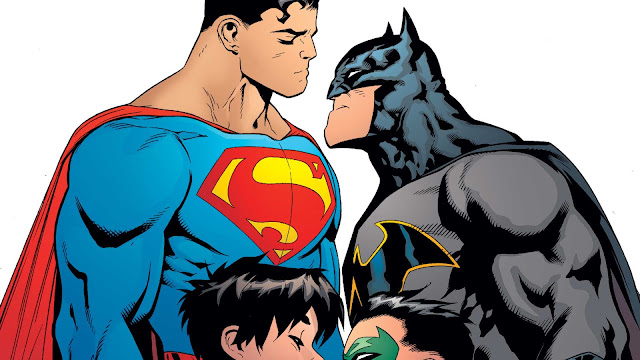 How To Make Friends and Intimidate People 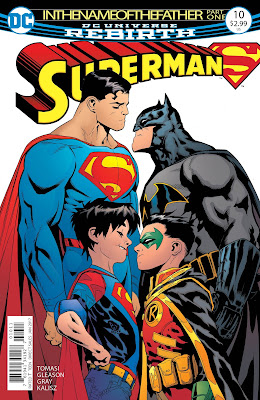 Written By: Peter J. Tomasi, Patrick Gleason
Art By: Patrick Gleason, Mick Gray, John Kalisz, Rob Leigh
Cover Price: $2.99
Release Date: November 2, 2016
*Non Spoilers and Score At The Bottom*
While this Superman run has been something that I look forward to whenever it's released, I have to say that it's this story here that I've been anticipating the most.  We've got our Bat father and son and our Super father and son finally meeting up and with that, the new series Super Sons spinning out of it next year.  Hell, I probably would have been alright with that series being called World's Finest because whether Damian and Jon are, Damian would surely take on that moniker and make sure to prove it.  Let's jump into this issue and see if these two youngsters first meeting is all about pinatas and RC Cola or if they're anything like me growing up and have to fight someone in order to become good friends.  Let's check it out.

Good health and fitness is worth figh…
101 ideal activities for my new life …
Blade Runner Co-Star Rutger Hauer Die…
My Most Anticipated Retellings From J…
THE TRUMP SHUTDOWN - What's Next
Explain It!:
Our issue begins on the day before Christmas break in Hamilton County and Jon and Kathy are excited as hell for what the break will bring, but at this very moment Jon seems mostly concerned with possibly finding a Christmas tree in a place that's known around town as Dead Man's Swamp....... Yeah, not the best place to hang out or going looking for things and since Kathy knows this, she just straight up ditches Jon because even though he's supposed to go out with his father over the weekend to go find a tree, he seems hellbent to find one on his own.......... Which leads to some scary psychedelic shit for some reason, which also leads to Damian setting the woods ablaze with his heat vision.  Luckily, Damian Wayne has been keeping tabs on our young Superboy and had Maya Ducard watching him from her skyward perch atop Goliath and the two pull Jon out of the fire before he's possibly hurt.  Now, staring face to face with a big ass bat monster is sure to get ones heart pumping and while we've seen Jon's heat vision go wonky, we sure as hell didn't expect Jon's freeze breath to become a thing....... especially not Maya or Goliath. 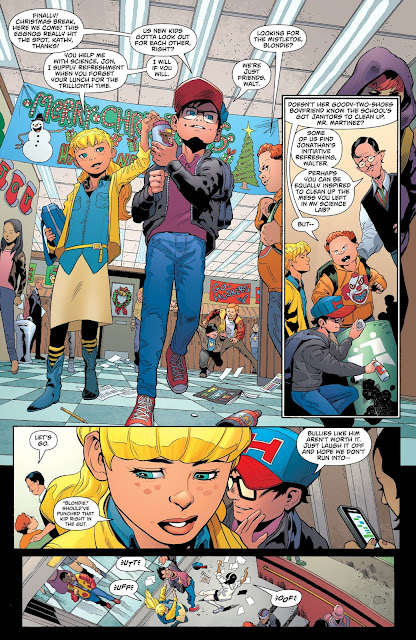 Jon awakes in the Batcave, where Damian seems to have come in and saved Maya, Goliath and Jon from their fall and getting caught by the police and fire company and our little Robin seems to be running some tests on our Superboy because he deems him a threat.  This is a terrible idea because not only does Batman flip the hell out when he arrives and sees what's happening, but we all know what's coming next.  That's right, Superman busts in the Batcave looking to rumble, but thankfully all of that is shut down once Jon blasts a wall of ice breath in front of his father and Superman sees that his son has a new ability.  Now that the tension is released, Superman and Batman run some tests in the Batcave to see what's up with Jon, even though Superman already did this in the Fortress and Maya, Damian and Jon get to know one another....... and also check out Damian's pets, which is always fun. 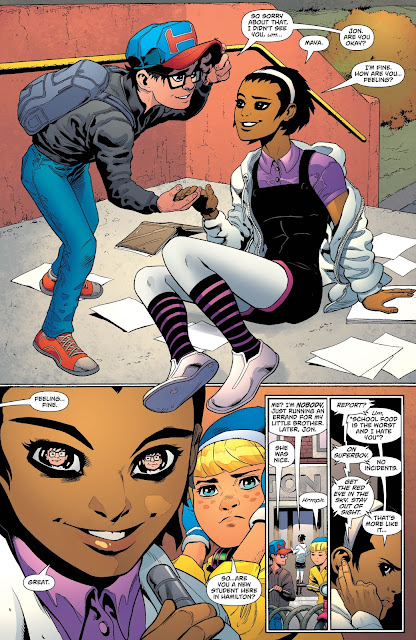 In the end, Batman comes up with some answers about Jon which seems to point to the fact that Jon will uncover new powers as time goes on and while our two fathers are looking over the information, Damian hits Jon with a low blow by bringing up the fact that he killed his cat Goldie......... which turns to Jon putting Robin in his place by giving him a slug to the gut.  As our issue closes, the two boys tussle until Batman and Superman shut that shit down with a menacing look. 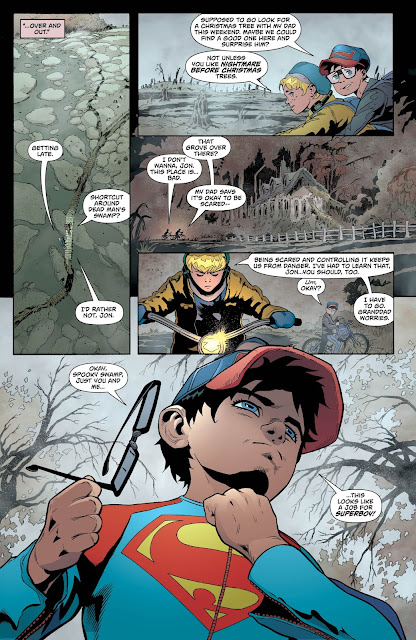 That's it for this issue of Superman and besides for the odd ass beginning with Jon exploring Dead Man's Swamp for a Christmas tree, I loved everything in this issue.  The art was fantastic all the way through and I love the way Patrick Gleason draws all of these characters.  On top of that, this issue feels like the best sequel we could get to not only the Batman and Robin series, but also the Robin: Son of Batman series as well with the inclusion of Maya, who I was afraid would get the shaft by not being seen again after Damian's title was finished, but here she is and her interactions with Damian and Jon were great, while also adding a new dynamic by her making Damian jealous of Jon.  This is a great start to this story that I can't wait to dive into because while there was some serious shit going on with what Damian decided to do on his own, this issue was also fun as hell and got me laughing out loud at a lot of its moments.
Bits and Pieces:
This is a great introduction to not only this story, but also to the Super Sons series coming out in a few months and I found myself loving almost every page of it.  It's a bit weird in the beginning, but it eases our newest World's Finest team into a relationship that will sure to shake the world.  Great art and a great story that leaves me wanting more.
9/10

THE TRUMP SHUTDOWN - What's Next