Legends of Tomorrow #6 Review and **SPOILERS** 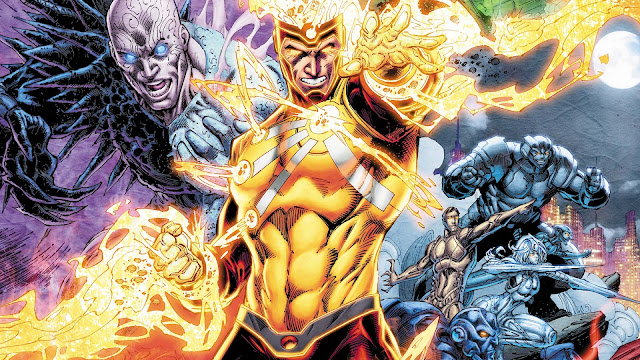 Yesterday's Legends of Tomorrow is a Review for Today 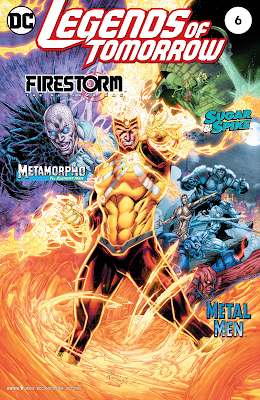 **NON SPOILERS AND SCORE AT THE BOTTOM**

Here we are again, late with our Legends of Tomorrow review. It is all my (Reggie's) fault! Heap the scorn upon me. I want the scores and scores of ardent Legends of Tomorrow comic book fans to deluge this website's e-mail ([email protected]) with all of the hate and invective that I deserve. Don't hold back! If you read this issue and are annoyed at this delinquent review, know that the blame lies squarely with me (Reggie)! In fact, while thousands of Legends of Tomorrow fans bombard this site's e-mail ([email protected]) with venomous anger against yours truly, you should also heap lots of love and praise on Eric Shea, who is not the cause for the lateness of this review. Lay it on thick, he loves it! So while I will be rightfully punished by a legion of Legends of Tomorrow fanatics, Eric will be justifiably praised for doing his due diligence and returning his reviews on time. Read on!

Firestorm in "United We Fall: Conclusion"

In our final installment of Firestorm, we see our hero take on Multiplex and all the nightmare creatures that have sprung forth from his distortion field and if that wasn't enough for the Nuclear Man to handle, we also have the return of General Eiling.  Instead of throwing Major Force at our hero though, this time the General seems completely fed up and after locating Firestorm and Multiplex, he says fuck it and launches a missile at their asses.  Even with our hero being forced to take on all these things, the ending to our big Multiplex plan to destroy the world is so anti-climactic to the point where all our heroes do is separate themselves into their natural forms and Prof Stein simply turns off a switch, while Ronnie tackles some fools and after that, all the creatures and Multiplex's other forms disappear for some reason.  I can understand the creatures disappearing because the field they emanated from was closed, but why would Danton lose his power?  The risk is completely thwarted when Firestorm flies away with the kidnapped scientist and Danton struggles to get free from our hero's grasp, landing back down into the building that was targeted by the missile....... It's just that easy folks.  As our issue closes, we find out that Jason's academic rival has been roofie-ing him before all his intern interviews because she was tired of being number two in the school........ That's right, Jason was separated from the Firestorm Matrix because of roofies........ Way to science Prof Stein! 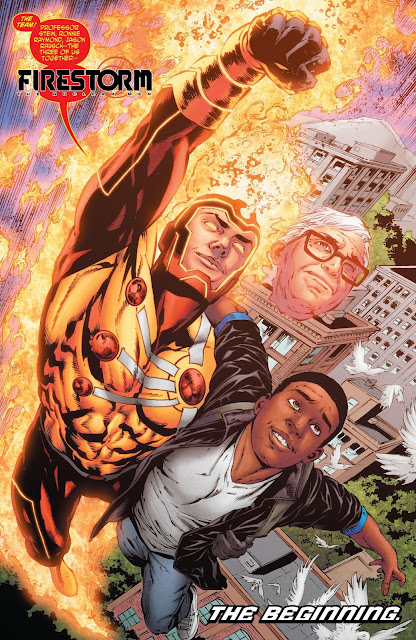 This was a pretty lackluster ending to this mini series and not just the villain fight either.  I mean, we've had all this subplot about Jason's Firestorm Matrix being on the fritz to the point where he could die if Prof Stein didn't take it from him and in the end all it turned out to be was a spiteful bitch, who was drugging our hero the whole time........... What the shit is that?  Is this all because of DC trying to get back to the legacy of the character or possibly trying to get Prof Stein in this bitch because that's what's going on in the TV shows?  The New 52 Firestorm book struggled for a long time until it finally wised up and fused Ronnie and Jason together and after that it was awesome, but it was a too little too late situation, where most of the readership had already bailed on the series, causing it to get cancelled.  I just wasn't impressed with anything we got from this finale.......... Well, except for the art.  The art was awesome the whole way through this series and while I was originally excited to see a new Firestorm story, this just underwhelms the hell out of me.

Metamorpho in "Two Worlds One Destiny Finale: Rebirth and Redemption"

Metamorpho having been clobbered and rendered inert by Java, the rest of the extra-dimensional warriors try to take down the big ape, but fail...miserably. Only Sapphire is able to quell the savage beast, with song. I mean with a syringe filled with enough tranquilizer to fell an elephant. Sapphire apologizes for having made off with the orb earlier, and says she will accompany Rex to the orb's rightful place, which will restore the land and stuff. While carrying the orb, Rex's power is inert I guess, so we get to not see him use his shape-shifting elemental abilities for most of the issue, which is sort of...lame. When they get to the spot and discover that the pyramid houses a Snoopy Sno-Cone Factory, Kanjar-Ro appears and tries to snatch the orb, but Mr. Butterfingers ends up dropping it and breaking it! This turns Sapphire into Unity, a golden mystical lady that can't be around Rex because her orb powers mess with his mojo. So she takes off, which really bums Metamorpho out. He walks out of the pyramid with Kanjar-Ro in tow, and of course he is welcome to stay in the weird warrior dimension as long as he likes, but instead he chooses to return to his plane--to antagonize Simon Stagg! 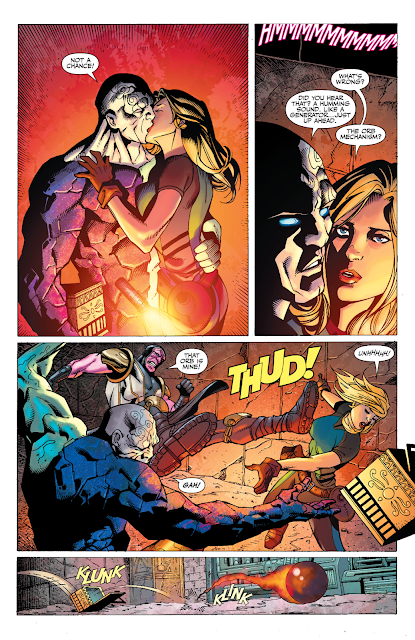 There are worse comics. I really liked the way Aaron Lopresti rendered Metamorpho (and he was no slouch with everything else, either), and I feel like he employed distinct voices for every character, but this story didn't grab me–perhaps due to my expectations, admittedly. Maybe if this had been an individual comic at $2.99, rather than one sandwiched in with three other titles for eight bucks, I'd feel differently. I wouldn't mind seeing Lopresti tackle Metamorpho again, for what it's worth.
7.5/10
Sugar and Spike in "Future Shock"

Written By: Keith Giffen
Art By: Bilquis Evely, Mat Lopes & Ivan Plascencia
Lettered By: Sal Cipriano
So what Keith Giffen did is load up his testicles with a whole bunch of Silver Age comics, just stuck a funnel into 'em and poured a bunch of old issues of Adventure Comics and Teen Titans by Bob Haney, then pulled out a sheet of paper and had a good wank all over the pages. Just spewed a lot of Silver Age spooge everywhere with a nod and a wink and a half-lidded, orgasmic stare. This is why new comics readers hate us, you know that right? I'm a guy who absolutely loves his silly Julius Schwartz-era DC comics (check out the Cosmic Treadmill every week on the Weird Science DC Comics Dot Com Podcast!) but this is atrocious. The Legion of Superheroes are in this one. If that means anything to you, then pat yourself on the back and go on with the rest of your day with the self-assurance of being someone that knows something unique that matters less than a hill of shit. 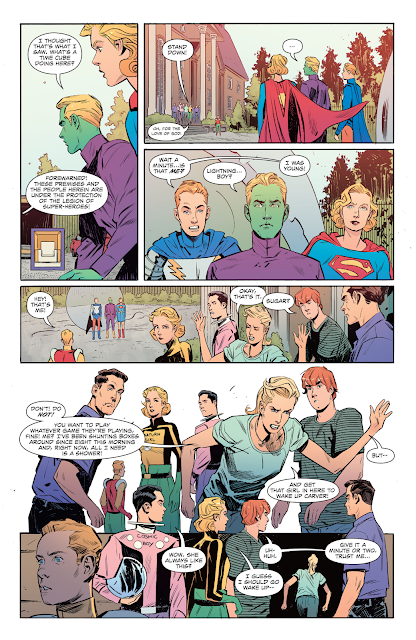 Everything bad I have to say about the story applies only to the writing. The artwork by Bilquis Evely and team is divine. I would normally plead with DC Comics to sign Bilquis to an exclusive, but I don't think they deserve it for giving her this claptrap to draw. She should be drawing a creator-owned title at Vertigo or some such. And I would be first on line to buy it (not really, I get a pull list.) When Sugar and Spike is all collected, however, anyone that buys it will immediately go on the NSA's watch list for psychopathic behavior. Mark my words.
2/10
The Amazing Metal Men in "Keep Away From...Chemo!"

Written By: Len Wein
Art By: Yildiray Cinar, Trevor Scott, Jeremy Colwell
Lettered By: Steve Wands
It's the showdown we've all been waiting for....... Well, since last issue at least because even though I swore up and down that the finale to this series would pit all our robot guest stars and our Metal Men against some kind of super science evil, instead we have our OG Metal Men teaming up with the new batch to take on the resurrected Chemo and goddamn does it get brutal.  Yeah, you might be saying to yourself that nothing the Metal Men do could really pull an emotion out of you, but this issue might change your emotionally dead opinion because we see our heroes getting taken down left and right from the toxic terror until all that's left is Tin.......... which is funny as hell because it's goddamn Tin.  Anyway, in a last ditch effort to save the day, Tin locates Chemo's responsometer and sacrifices himself to take it out....... and sadly, that's where the fun of this issue ends because it really starts diving into the nonsense pool.  Throughout this mini we've seen some mysterious figure behind the scenes, telling Calculator what to do and in this issue we find out that it's Mother Machine, who we haven't seen since the Blackhawks series........ which is cool, but the cool quickly goes away when Doc Magnus sucks her consciousness into Chemo's responsometer as soon as she rears her ugly head........... and I just don't know how any of this works because apparently her consciousness is her entire body and it just makes the whole thing come off ridiculous as hell.  As our issue closes, Doc Magnus gets to work to remake his Metal Men, but since only Copper was made with a responsometer of his design, he's only able to recreate that member of the other team to add to his roster.......... and for some reason decides that he had to modern up our heroes as well....... and I hate the new look. 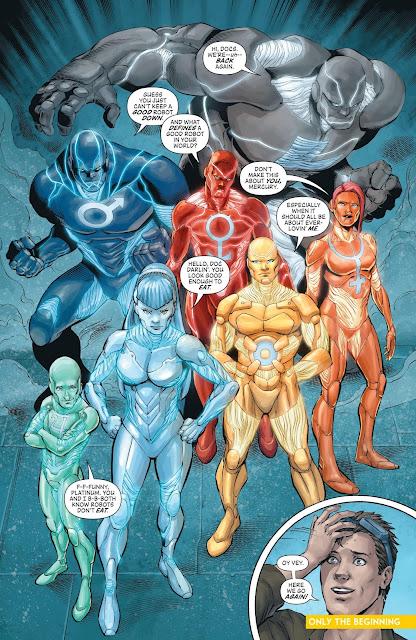 All in all, this issue started out strong because it's hard as hell to make a Metal Men fight interesting, but it was achieved amazingly here, it's just that everything after that was terrible in my mind.  The villain was quickly introduced and dispatched immediately and it didn't make any sense to me at all about how it was done, not to mention that the new looks for our Metal Men and the newly introduced Copper made them look ridiculous........ which is a shame because I loved the way the Metal Men looked and I fear the day we see them again in their new visages.  So yeah, not a strong ending to this mini, but the first half was action packed and made you care about the well being of these bumbling heroes....... We also had some amazing art throughout, making this in my mind the best looking mini in this Legends of Tomorrow book.

6.8/10
Bits and Pieces:
That's it for our foray into this strange ass collection of mini series....... and it's about time.  Yeah, when this was first announced I have to admit that I was interested in the concept, but after having to read all these stories month after month I can see why they were packaged together........ Because there's no way they would have sold separately.  If you've been reading the rest of these issues then you should totally pick this up to complete your collection, but I see no other reason to ever read this.

Legends of Tomorrow #6 Review and **SPOILERS**