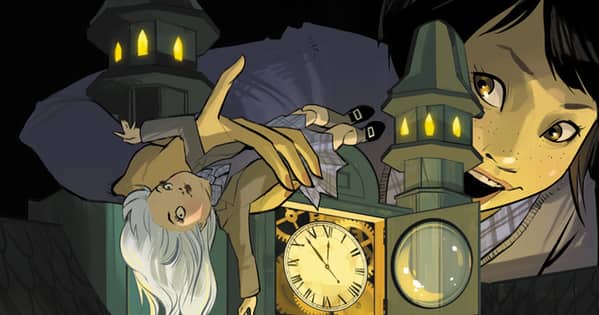 It seems like forever since we've had a Gotham Academy book to curl up in bed with and read while eating fried chicken.  What, you don't eat fried chicken in bed while reading comic books?  Well, you are a weirdo then.  As they say, different strokes.  Speaking of Different Strokes, Mrs. Garrett was one of my favorite characters on both Diff'rent Strokes and The Facts of Life and would be such a great addition to Gotham Academy.  It makes so much sense that I don't know why it hasn't happened yet.  I can just imagine Mrs. Garrett finding out the latest hijinx Olive and Maps have gotten into..."Girls, Girls Girls"... Check out these Fiona Staples variant covers that might not feature Mrs. Garrett, but are still very awesome!

GOTHAM ACADEMY: SECOND SEMESTER GETS 2 NEW VARIANT COVERS BY FIONA STAPLES
The students of Gotham Academy are back on September 14 in the new series GOTHAM ACADEMY: SECOND SEMESTER, written by Becky Cloonan, Brenden Fletcher and Karl Kerschl with art by Adam Archer, Sandra Hope and MSASS! To celebrate the return of the beloved Pizza Club, artist Fiona Staples has created new variant covers for GOTHAM ACADEMY: SECOND SEMESTER #1 through #3.
In the first few issues of the new series, when you’re Olive Silverlock, winter holidays can be a drag. Luckily, when a new student shows up at Gotham Academy to keep her company while the other students are away, Olive finds what could be a brand new friend…or a whole lot of trouble! And despite Olive’s new friendship with the rebellious Amy, she, Maps, Kyle, Colton and Pomeline are back together at last. The only thing they’re missing…is a mystery!
Maps campaigns to recruit new cases, but stumbles on a threat that might be too big for even the Detective Club! Will Maps Mizoguchi abandon the Detective Club for…Witch Club?! The gang refuses to believe that their fearless cartographer would ever
betray them. A mystery must be afoot! But who is behind it and what sinister plans do they have for the Academy?
Here are the regular Karl Kerschl Covers to drool over while we're at it!

The collaboration of Binance and Papa…
Faig Ahmed: Textile Artists Series
Remembering Woodstock On Its 50 Year …
90 Days Update
A Personal GPS Tracker You Must Pack …