In her townhall on April 25th, Hillary Clinton said that New York's people had read the Daily News interview of Bernie Sanders;

Hillary: Look, I think we have much more in common and I want to unify the Party, but my Wall Street plan is much more specific than his. We saw that when he couldn't even answer questions in the New York Daily News interview. I have laid out a very clear set of objectives about not just reining in the banks -- because we already have Dodd-Frank, which President Obama passed inside (ph) and I said I will implement it. But I've gone further.

This post will make it clear that the Daily News interview was a hit job and Hillary probably knows this by now given the caliber of media reporting on her and that she is purposely out there spreading misinformation as part of her strategy of winning, i.e. she's awfully alot like an establishment Republican like George Bush who Obama compared her to in 2008 (accurately, apparently)

First, an article from the Huffington Post that kinda exposes the Daily News in a way that is normal for a Democrat;

Huffington Post: Did Bernie Sanders Botch An Interview With The Daily News? It’s Not That Simple. The interview exposes as much about the media as it does about Bernie Sanders.

A notion is rapidly crystallizing among the national media that Bernie Sanders majorly bungled an interview with the editorial board of the New York Daily News. His rival, Hillary Clinton, has even sent a transcript of the interview to supporters as part of a fundraising push. A close look at that transcript, though, suggests the media may be getting worked up over nothing.

MRS THATCHER’S DREAM
10 Best Restaurants in St. Augustine
Comb 2-in-1 Floating Hair Removal Pet…
The Best Veneer Dentist in Los Angele…
DAVIDO: 3 YEARS OLD BOY IFEANYI, IS D…
In fact, in several instances, it’s the Daily News editors who are bungling the facts in an interview designed to show that Sanders doesn’t understand the fine points of policy. In questions about breaking up big banks, the powers of the Treasury Department and drone strikes, the editors were simply wrong on details.
Take the exchange getting the most attention: Sanders’ supposed inability to describe exactly how he would break up the biggest banks. Sanders said that if the Treasury Department deemed it necessary to do so, the bank would go about unwinding itself as it best saw fit to get to a size that the administration considered no longer a systemic risk to the economy. Sanders said this could be done with new legislation, or through administrative authority under Dodd-Frank.
This is true, as economist Dean Baker, Peter Eavis at The New York Times, and HuffPost’s Zach Carter in a Twitter rant have all pointed out. It’s also the position of Clinton herself. “We now have power under the Dodd-Frank legislation to break up banks. And I’ve said I will use that power if they pose a systemic risk,” Clinton said at a February debate. No media outcry followed her assertion, because it was true.
As the interview went on, though, it began to appear that the Daily News editors didn’t understand the difference between the Treasury Department and the Federal Reserve. Follow in the transcript how Sanders kept referring to the authority of the administration and the Treasury Department through Dodd-Frank, known as Wall Street reform, while the Daily News editors shifted to the Fed.

Daily News: Okay. Well, let’s assume that you’re correct on that point. How do you go about doing it?
Sanders: How you go about doing it is having legislation passed, or giving the authority to the secretary of treasury to determine, under Dodd-Frank, that these banks are a danger to the economy over the problem of too-big-to-fail.
Daily News: But do you think that the Fed, now, has that authority?
Sanders: Well, I don’t know if the Fed has it. But I think the administrationcan have it.
Daily News: How? How does a president turn to JPMorgan Chase, or have the treasury turn to any of those banks and say, “Now you must do X, Y and Z?”
Sanders: Well, you do have authority under the Dodd-Frank legislation to do that, make that determination.
Daily News: You do, just by Federal Reserve fiat, you do?

This is simply a factual dispute between the Daily News and Sanders, not a matter of opinion. The Daily News was wrong.
Read more of the article here.

I tweeted it out to let people know; 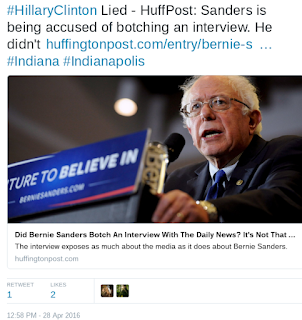 Now note two things more things from the Daily News interview's transcript that show it was a lying hit job; This question starts off sounding like a GOP Establishment hit job. Taking a small number of jobs and saying that those few jobs is what is holding the WHOLE of America together is the very use of the GOP's much celebrated "Job Creator".

The question basically says, about a company that is in an area to avoid taxes as given to them by thier bribed congressmen, that they have given us 115,000 PERMANENT employees. One day, when Hillary has shipped all our jobs abroad, these 115,000 people in a country of 400 million will have jobs and be nice to us. These will be our rulers. Do you really want to be mean to them? Or something like that.

The Daily News continues with it's GOP Establishment them; 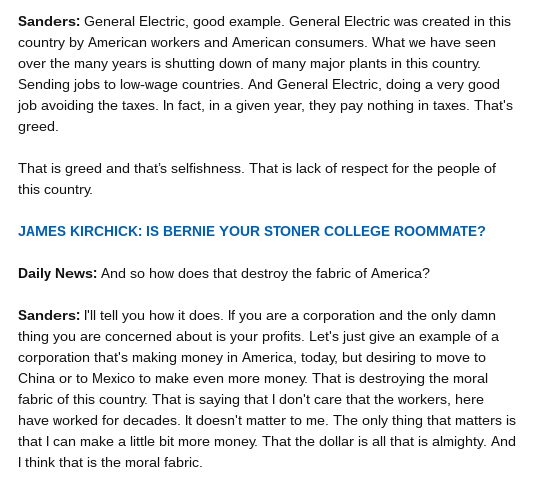 While Daily News lies about Sanders it puts a link in their that is basically a right wing style attack on someone being too high to think straight. As per that famous movie "Reefer Madness", i.e. filling a persons mind with thoughts to make them purposely back away from facts you want to hide. (Reefer Madness was a successful attempt to save rich loggers the inconvenience of competing with hemp paper makers, kinda like how we decided to destabilize a country so a British Oil Company would keep it's contract).

That General Electric pays no taxes I covered earlier, that not paying taxes and making the poor shoulder the tax burden being a stress on any society is something we have known since Aristotle, so this shouldn't be a big deal. Either the Dialy News is dumb or traitors/liars.