This cover assumes a righteousness which I don't believe The Daily News, or any Corporate Media, has the right to have. 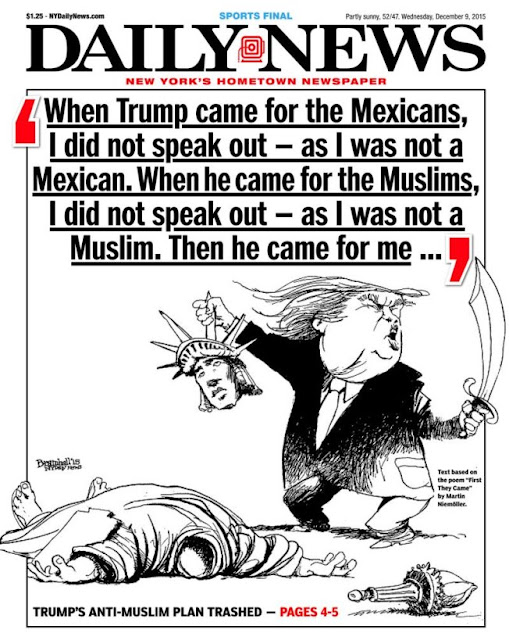 What follows is me mocking the cover using facts corporate media leaves out of it's discussions;

What the cover would sound like if they told the truth...
"First we came for the Muslims & Covered it up (Geez. We're not stupid)"

Sixty years after the overthrow of Iranian Prime Minister Mohammad Mossadegh, a declassified CIA document acknowledges that the agency was involved in the 1953

Advantages and Disadvantages of Epoxy…
High Paying Jobs ($100,000+ /yr) With…
Planning for Retirement
11 Budgeting Apps That Will Change Th…
Loblaw hits the brakes on food inflat…
The independent National Security Archive research institute, which published the document Monday, says the declassification is believed to mark the CIA's first formal acknowledgment of its involvement.
The documents, declassified in 2011 and given to George Washington University research group under the Freedom of Information Act, come from the CIA's internal history of Iran from the mid-1970s and paint a detailed picture of how the CIA worked to oust Mossadegh.
In a key line pointed out by Malcom Byrne, the editor who worked through the documents, the CIA spells out its involvement in the coup. "The military coup that overthrew Mossadeq and his National Front cabinet was carried out under CIA direction as an act of U.S. foreign policy, conceived and approved at the highest levels of government," the document says, using a variation of the spelling of Mossadegh's name.
While this might be the CIA's first formal nod, the U.S. role has long been known.President Barack Obama acknowledged the United States' involvement in the coup during a 2009 speech in Cairo.
"In the middle of the Cold War, the United States played a role in the overthrow of a democratically elected Iranian government," the president said.
"Then we went after Muslims again, the Vietnamese, Africans, Cambodians"
Article: Henry Kissinger, Hillary Clinton’s Tutor in War and PeaceLast night, Clinton once again praised a man with a lot of blood on his hands.

Let’s consider some of Kissinger’s achievements during his tenure as Richard Nixon’s top foreign policy–maker. He (1) prolonged the Vietnam War for five pointless years; (2) illegally bombed Cambodia and Laos; (3) goaded Nixon to wiretap staffers and journalists; (4) bore responsibility for three genocides in Cambodia, East Timor, and Bangladesh; (5) urged Nixon to go after Daniel Ellsberg for having released the Pentagon Papers, which set off a chain of events that brought down the Nixon White House; (6) pumped up Pakistan’s ISI, and encouraged it to use political Islam to destabilize Afghanistan; (7) began the US’s arms-for-petrodollars dependency with Saudi Arabia and pre-revolutionary Iran; (8) accelerated needless civil wars in southern Africa that, in the name of supporting white supremacy, left millions dead; (9) supported coups and death squads throughout Latin America; and (10) ingratiated himself with the first-generation neocons, such as Dick Cheney and Paul Wolfowitz, who would take American militarism to its next calamitous level. Read all about it in Kissinger’s Shadow!
A full tally hasn’t been done, but a back-of-the-envelope count would attribute 3, maybe 4 million deaths to Kissinger’s actions, but that number probably undercounts his victims in southern Africa. Pull but one string from the current tangle of today’s multiple foreign policy crises, and odds are it will lead back to something Kissinger did between 1968 and 1977. Over-reliance on Saudi oil? That’s Kissinger. Blowback from the instrumental use of radical Islam to destabilize Soviet allies? Again, Kissinger. An unstable arms race in the Middle East? Check, Kissinger. Sunni-Shia rivalry? Yup, Kissinger. The impasse in Israel-Palestine? Kissinger. Radicalization of Iran?  “An act of folly” was how veteran diplomat George Ball described Kissinger’s relationship to the Shah. Militarization of the Persian Gulf?  Kissinger, Kissinger, Kissinger.
And yet Clinton continues to call his name, hoping his light bathes her in wisdom.
As first lady, Hillary Clinton spent the early months of her husband’s administration drafting healthcare-reform legislation, only to see it put on the back burner by the North American Free Trade Agreement. Kissinger, in his role as a global consultant, had played a critical role in bringing the various parties who would write that trade treaty together during the previous George H.W. Bush administration. Kissinger continued his NAFTA advocacy with Bill Clinton. As Jeff Faux writes in his excellent The Global Class War, Kissinger was “the perfect tutor” for Clinton, who was “trying to convince Republicans and their business allies that they could count on him to champion Reagan’s vision.”
By September 1993, Hillary’s healthcare bill was ready to be presented to the public and to Congress. But so was NAFTA. All of Kissinger’s allies in the White House, including Mack McLarty, who would soon join Kissinger Associates, pushed Clinton to prioritize NAFTA over healthcare. Clinton did. It was Kissinger who came up with the idea of having past presidents stand behind Clinton as he signed the treaty. Reagan was sick and Nixon still non grata, but “flanked by former presidents Bush, Carter and Ford at a White House ceremony, Mr. Clinton delivers an impassioned speech,” The Wall Street Journalreported. No such presidential backdrop was assembled to help support Hillary Clinton’s healthcare proposal. By August 1994, healthcare was dead.
But whatever Hillary Clinton might have once felt about Kissinger’s invasion of Cambodia or the role he played in sidelining healthcare legislation she worked so hard on, she has made her peace and accepted the elder statesman as her tutor too.  Last year, reviewing Kissinger’s World Order for The Washington Post, Clinton said that “Kissinger is a friend” and admitted that she “relied on his counsel” and that he “checked in with me regularly, sharing astute observations about foreign leaders and sending me written reports on his travels.” The “famous realist,” she said, “sounds surprisingly idealistic.” Kissinger’s vision is her vision: “just and liberal.”
"Then we came for the Central Americans (All colored people are game!)"
"Reagan Was the Butcher of My People:" Fr. Miguel D'Escoto Speaks From Nicaragua

Recently discovered documents at the Reagan Presidential Library in Simi Valley, California, also reveal that Reagan’s White House was reaching out to Israel in a scheme to circumvent congressional restrictions on military equipment for the Guatemalan military.
In 1983, national security aide Oliver North (who later became a central figure in the Iran-Contra scandal) reported in a memo that Reagan’s Deputy National Security Advisor Robert McFarlane (another key Iran-Contra figure) was approaching Israel over how to deliver 10 UH-1H helicopters to Guatemala to give the army greater mobility in its counterinsurgency war.
According to these documents that I found at the Reagan library and other records declassified in the late 1990s it’s also clear that Reagan and his administration were well aware of the butchery underway in Guatemala and elsewhere in Central America.
"Some tried to help & we did nothing (it was colored people, who cares)"


Abstract: This is the full length 90 min. version of Bill Moyer's 1987 scathing critique of the criminal subterfuge carried out by the Executive Branch of the United States Government to carry out operations which are clearly contrary to the wishes and values of the American people. The ability to exercise this power with impunity is facilitated by the National Security Act of 1947. The thrust of the exposé is the Iran-Contra arms and drug-running operations which flooded the streets of our nation with crack cocaine. The significance of the documentary is probably greater today in 2007 than it was when it was made. We now have a situation in which these same forces have committed the most egregious terrorist attack on US soil and have declared a fraudulent so-called "War on Terror". The ruling regime in the US who have conducted the invasions of Afghanistan and Iraq, are now banging the war drum against Iran.

When you notice what the Establishment had planned for us in 1987 and you see that it has come to pass with the Iraq Oil War (see below) ... should we not be wary of any establishment figure?

‘Why we did it’ Part 1, - US thirsty for energy Rachel Maddow looks into the real reason the U.S. went to war in Iraq. The entirety of this documentary will be on demand at now.msnbc.com.


More of the documentary investigating the plan to invade Iraq for oil that began many months before 9/11...

Rachel Maddow Documentary Special: "Why We Did It" - The Invasion of Iraq (FULL)

Highlights showing Cheney's connections to the oil companies and the planning for take over of the oil fields of Iraq that took place in the Bush Administration... months before 9/11!!!! 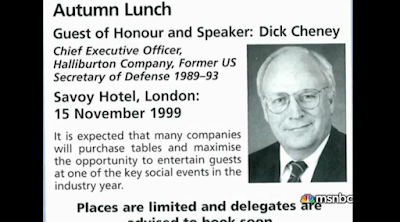 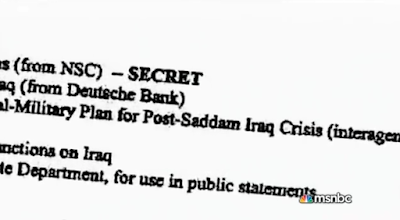 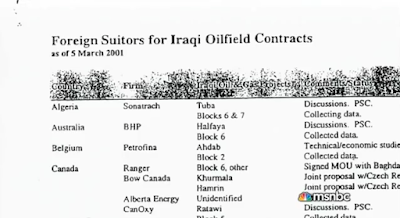 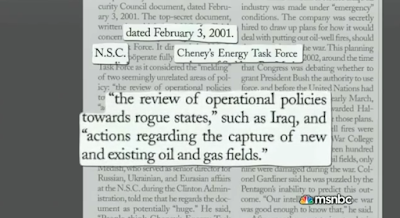 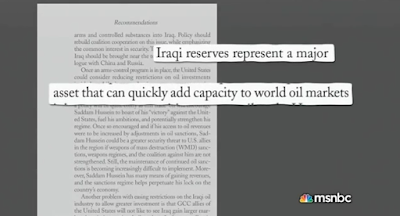 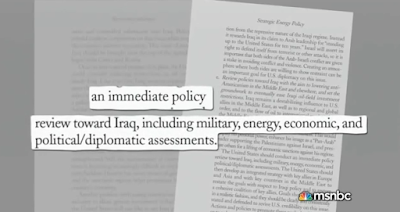 Article: Hillary’s Iraq vote is disqualifying: It’s not enough to have experience if the judgment is wrong The Bernie/Hillary "qualification" debate really is important. It's essential to keep in mind the actual records
Before addressing the differences in their Iraq votes and favorability ratings, Democrats should take a trip down memory lane and revisit the 2008 Democratic primary. Now that Bill Clinton has displayed his true feelings towards Black Lives Matter, months after Southern states helped Hillary take an early lead, it’s important to remember that the Clintons utilized racism against Barack Obama. In 2008, Bob Herbert wrote a New York Times piece titled Of Hope and Politics documenting Hillary Clinton’s use of race and Islamophobia:
Clinton’s linking of Iraq’s leader and Al Qaeda, however, was unsupported by the conclusions of the N.I.E. and other secret intelligence reports that were available to senators before the vote…
Nevertheless, on the sensitive issue of collaboration between Al Qaeda and Iraq, Senator Clinton found herself adopting the same argument that was being aggressively pushed by the administration…

Yes, Hillary Clinton adopted Bush’s talking point and continued to perpetuate this myth.
With Nixon the above "KKK Style" foreign policy became the status quo... and with Henry Kissinger as his right hand man he waged the Vietnam war of genocide. Strange that Kissinger managed to avoid t=both the racist  label and KKK label... but he is best friends with Hillary Clinton and the similarities between the two and George Bush are striking;
Related posts:
War Criminal Henry Kissinger Admires Hillary Clinton's Work In The State Department!?!?!?!
Hillary Has A Relationship With Henry Kissinger. Her Link To Bush & Cheney Is Now Complete. HAHAHAHAHA
It's Racist Not To Cover & Spread Hillary Clinton's ATROCIOUS Record On Race. African American's Are Being Deceived AGAIN!
The Nightly Show Slams Bill Clinton For Showing His True Colors
What EXACTLY has Trump done except speak the truth? While the media lies? Do you think we are not going to continue Kissinger's path under the Clintons? Of course we are.
Post: Hillary & Bill Clinton Have Already Been Co-Presidents For 8 Years. Electing Them Again Goes Against the Spirit Of The Law, i.e. NO THIRD TERMS!
Post: Of Course Bill Clinton Meant Obama When He Said The 'Awful Legacy Of The Last 8 Years'. Hillary Clinton Is LYING For Her Husband Bill.
Post: Hillary & Bill to Henry Kissinger to Bush-Cheney to the Beltway Media - An Unholy Alliance?
Post: A Summary Of The Corporate Media's Iraq War Treason Towards The People Of The United States Of America
Post: A Summary Of The Corporate Media's Treason Towards The People Over Bernie Sanders With Economist Robert Reich


This post first appeared on Culture & Society, please read the originial post: here
People also like
Advantages and Disadvantages of Epoxy Concrete Flooring
High Paying Jobs ($100,000+ /yr) Without A Degree
Planning for Retirement
11 Budgeting Apps That Will Change The Way You Spend Money
Loblaw hits the brakes on food inflation by freezing prices on 1,500 no name products
US Should Offer More Medical Aid to Severely Wounded Ukrainian Troops, Pair of Senators Say
Amazing benefits of carrot curry
2 Christian renaissance art app
The Russia-Ukraine Conflict’s Impact on Europe’s Economy and Living Costs, and the US role