It's Racist Not To Cover & Spread Hillary Clinton's ATROCIOUS Record On Race. African American's Are Being Deceived AGAIN!

Proofs that Hillary Clinton as an AWFUL record on race and people not knowing this is a crime (or should be);

Salon: Hillary’s atrocious race record: Her stances over decades have been painful and wrong - "The idea that she is or ever has been a stalwart advocate for black empowerment is absolutely ludicrous" 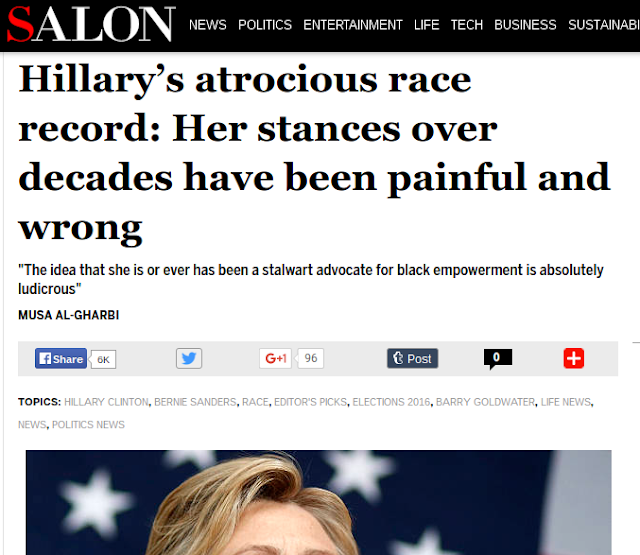 As an African-American, I have struggled to understand why so many of my black brothers and sisters seem to prefer Hillary Clinton over Bernie Sanders.
Some have argued that black people are terrified at the prospect of a Donald Trump presidency, and so they rally around Clinton under the belief that she is more electable in the November general contest. However, looking at the election results so far it seems clear that Bernie Sanders actually stands the best chance of prevailing over Trump.
Then there’s the notion that Hillary Clinton is somehow preserving Barack Obama’s legacy: just a few short months ago she was going out of her way to distance herself from the Obama administration because she believed it was politically expedient to do so. Now, under threat from Sanders’ insurgency, she is cynically trying to sell herself as Obama’s right hand. But of course, the moment she locks down the nomination she’ll go back to drawing contrast–the Clintons have always been leaders at “vote capturing.”
But perhaps the most disturbing of all is the insinuation that Hillary Clinton has some kind of proud and storied legacy in the service of black empowerment. She doesn’t. Consider the comparative records of Hillary Clinton and Bernie Sanders:
The Chicago Years
While attending the University of Chicago, Sanders served as a chapter chairman for the Congress for Racial Equality. In this capacity, he worked to end segregation in schools and housing—activities for which he was arrested.
What was Hillary Clinton doing while Sanders was organizing sit-ins and demonstrations? Well, she was also living in Chicago at the time, but she was working for the other team: in 1963-64, Clinton was a volunteer and supporter for the campaign of Barry Goldwater.
For those who don’t know, Goldwater’s claim to fame is that he was the first Republican to win the Deep South since Reconstruction. He achieved this feat byvowing to undermine enforcement of the Civil Rights Act, and to prevent further erosion of white privilege. His campaign was so disgusting that many Republican leaders, such as George Romney and John Rockefeller, refused to endorse his candidacy even after he won his party’s nomination. A good deal of the Republican electorate, who had traditionally championed civil rights and civil liberties, also refused to support him. As a result, those aforementioned Deep South states were literally the only contests he won other than his home state of Arizona in one of the most dramatic landslide losses in U.S. presidential history. Yet, this is the man who inspired Hillary Clinton to get into politics. And she was campaigning for him while Bernie was campaigning for desegregation.
The trend continues: in 1984 and ’88, Bernie Sanders endorsed and supported Jessie Jackson’s bids for the White House, which would have made him America’s first African-American president. Rather than endorsing this movement, Bill Clinton infamously sought to elevate himself among white Southern and Rust Belt voters at the expense of Jackson and his Rainbow Coalition.
Of course, it’d be easy to write this off–after all, it was a long time ago. However, the Clintons’ tenure in the White House doesn’t look so great in hindsight either:
The Clinton Administration(s)
Bill Clinton’s deregulation of banks and Wall Street helped bring about the 2008 financial collapse that profoundly and disproportionately obliterated black wealth. In the wake of this disaster, and despite their long and sordid history of discrimination and predatory practices against people of color, Hillary Clinton continues to defend the institutions responsible (and is richly rewarded for doing so).
Bill Clinton’s welfare reform further contributed to extreme poverty—particularly for African-Americans and other communities of color. While Bernie strongly resistedthese measures, Hillary staunchly advocated for them—referring to people on welfare as “deadbeats” who were largely responsible for their own continued poverty.
And then, of course, there are the Clinton-era “tough on crime” measures, whichHillary Clinton actively lobbied for. While Sanders ultimately voted for the bill for the sake of its assault rifle ban and domestic violence protections, he first took to the senate floor to passionately denounce the draconian sentencing provisions contained therein, which he aptly predicted would be exercised primarily against America’s poor, largely people of color. In contrast, Hillary Clinton referred to the criminalized as animals, describing them as “super-predators” which have to be “brought to heel.”
Extracts from an earlier post on Hillary's racist tactics ;

Views of most respondents to the hash tag #HillarySoQualified on twitter; 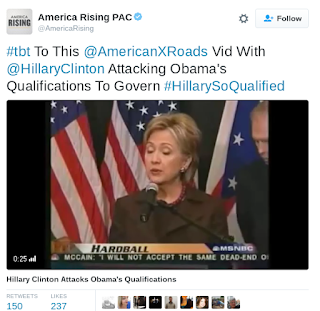 I thought this racist tactic by the Clinton's was especially revealing as they used a White Supremacists advice that the GOP use constantly;

Hillary’s Hypocrisy: Clinging to Obama After Her Racist Dog Whistles in 2008

Desperate and willing to do anything to win, the Clintons resorted to a naked form of racism aimed directly at white working-class voters in the rural portions of the state. Their message: Barack Obama cannot win because he’s black.
In the early stages of the campaign, it was Clinton’s cadre who kept playing the race card. In New Hampshire, Clinton’s co-chair, Billy Shaheen, accused Obama of being a drug dealer; then there was the photograph of Sen. Barack Obama in Somali garb leaked to the press by Clinton’s staff.
As anyone who has read the two major recent biographies of Hillary Clinton (Her Way: The Hopes and Ambitions of Hillary Rodham Clinton, by Jeff Gerth and Don Van Natta Jr.; and A Woman in Charge: The Life of Hillary Rodham Clinton by Pulitzer-prize-winning journalist Carl Bernstein) knows all too well, she will do whatever she has to do and say whatever she has to say in the unbridled (and unscrupulous) pursuit of power. The ash heap of her duplicity sprawls across decades and across various regions of this country — from Arkansas to the White House, from Illinois to, well, now, Pennsylvania.
Clinton is an inveterate liar — I am sorry, there is truly no other word for it — and as her ill-fated presidential campaign tumbles toward its inevitable demise, the personal deception that is at the core of her personality, and of her career, continues to reveal itself.
Image (source): 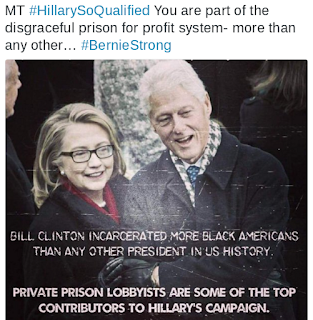 True. This is Hillary supporting Bill Clinton's Crime Bill as wife & Co-Presidents in 1994

Video: Mass Incarceration: Can Hillary Clinton Undo Bill's Legacy On Crime?
Recently Hillary cut her ties with money from the private prison industry... in other words, she destroyed hundreds of thousands of lives and got paid for it! Who cares if she cuts off her ties years after making money from it and destroying people. It's an election. Her reason for cutting her private prison money ties is obvious (i.e. votes).

As one journalist put it: To recap, Clinton voted to invade Iraq, backed job-killing trade agreements, suggested that black women on welfare were “deadbeats” who were “sitting around the house doing nothing,” called for “more police” and “more prisons” and “more and tougher prison sentences for repeat offenders,” and bases not only her campaign finances but her entire social universe on and amid the superrich who she resides among in Westchester and the Hamptons — because she is a realist who can get things done.


Hillary's racism still persists today and one has to wonder why the media isn't covering this in more detail and with more scandalous tones (we DID just have a black President are we gonna continue with GOP racist politics again?)
Image (Source) 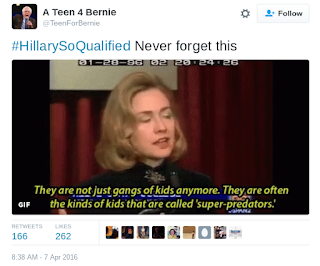 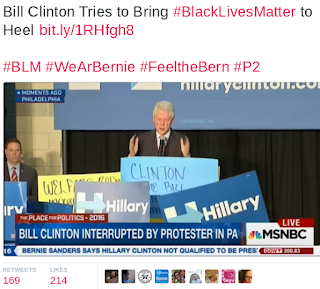 It's Racist Not To Cover & Spread Hillary Clinton's ATROCIOUS Record On Race. African American's Are Being Deceived AGAIN!