Homemade No Churn Raspberry Ice Cream
First off, lets look at Benghazi... for the death of 4 people we went through a hardcore media outcry (which the media themselves know is 'how they rile up the people'). Later a Bi-Partisan committee found no wrong doing. The media continues the outcry and so the controversy continues.

Now, lets look at the Iraq Oil War (I call it that because all evidence proves it was for oil). We lost 4000+ soldiers and killed 1.2 million people (directly & indirectly). Turns out there was a Bi-Partisan committee investigation & they discovered scandalous news... turns out we have proof that Bush-Cheney misled us into the Iraq War. Where's the outcry? Where's the righteous fury? Where's the reporting? Clearly corporate media is not media for the people. But don't take my word for it, look at the evidence;
Alternet: Senate Intelligence Committee: Bush and Cheney Misled us on Iraq
In news that should surprise no one, a bipartisan report finds the Bush administration exaggerated threats of WMDs as well as Saddam/al Queda links.

To understand how the media took this news and explained it to the people will immediately explain where "Iraq War Amnesia" either in the GOP or collectively, comes from. Imagine the ratings the networks could have had for covering this sensational news! What a loss in revenue! What an amazing cover-up/betrayal of the people's trust! See for yourself on the only "news" channel that reported on this;
Senate Intelligence Report - Number Two
Phase 2 of the Senate's report on whether the Bush administration manipulated intelligence to go to war finally comes out and man, is it worth the wait.  (04:24):
The Daily Show
Get More: Daily Show Full Episodes,The Daily Show on Facebook
1:47 - 'IN going to war, the administration did not say stuff supported by the facts and said things they knew were lies'

1:50 "There's a Headline: Government Misled Us Into War" Jon Stewart

3:30 - Stated that the report said the the Bush-Cheney administration misled us about the connections of Saddam Hussein to Al-Qaeda ... and the whole Iraq War (this should have led to a through media investigation)
The headlines that ACTUALLY were on the news Channels...

A REPUBLICAN WAS INVOLVED IN PREPARING THE REPORT 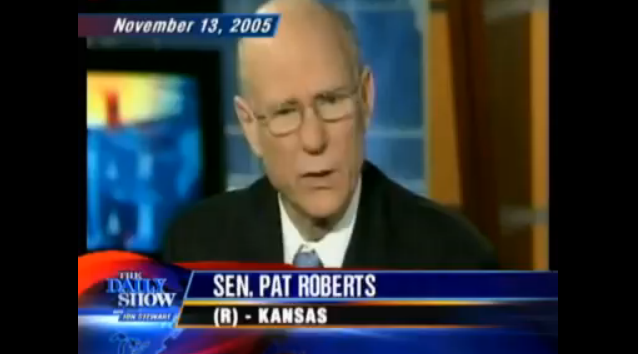 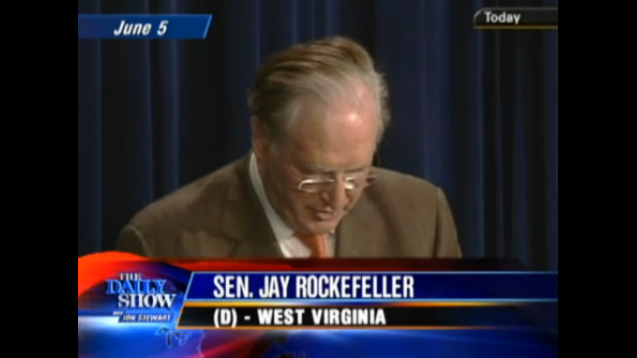 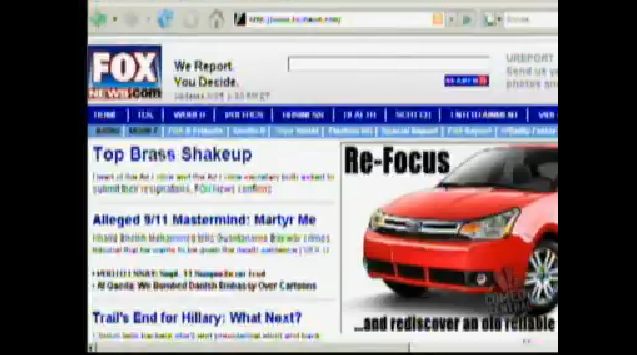 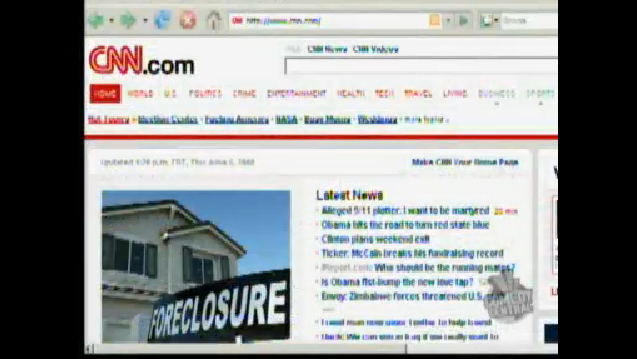 TOP STORIES IN THE US: LESBIANS KISSING! 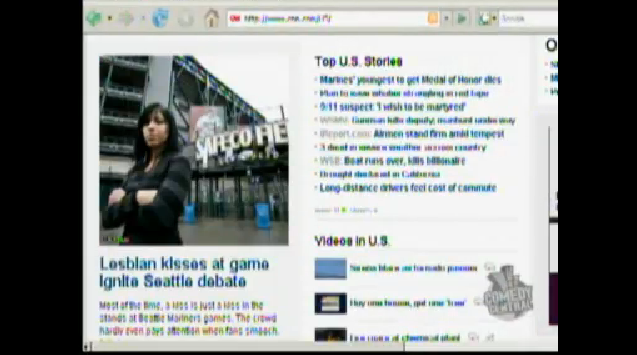 THESE WERE THE BIG THREE FOR THE LEFT IN 2008 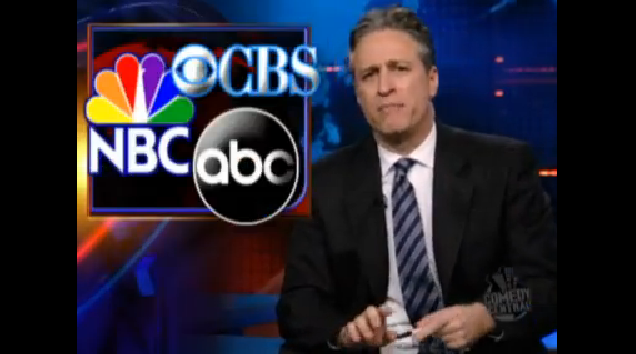 ABC ON THE DAY OF THE SENATE INTELLIGENCE REPORT... A FRENCH SPIDER MAN (HEY! AT LEAST THEY LET GO OF THE "FREEDOM FRIES" THING! *sarcasm*) 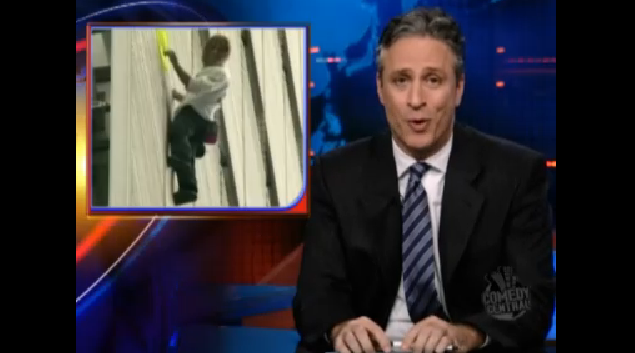 CBS DID A REPORT ON WEB GOSSIP... WHICH WASN'T EVEN NEWS BACK THEN. 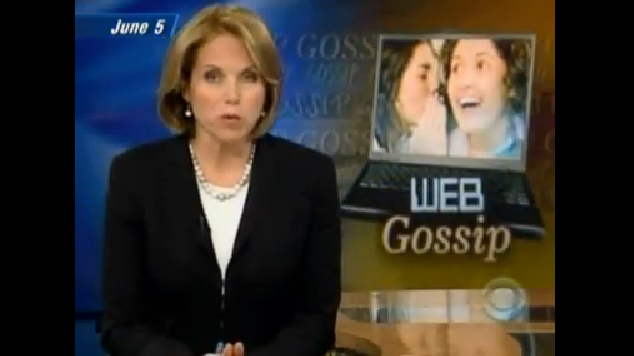 MSNBC DID CARRY THE SENATE INTELLIGENCE REPORT FOR A FEW MINUTES & THEN NOT ANOTHER WORD for years.

Why did MSNBC say nothing further? Well, they fired a guy for being anti-war. So, obviously they couldn't report on it. God knows what else they covered up.. if they started reporting they would lose thier channel.... Did you hear that? IN the land of free speech a man was fired for being right back when being right wasn't cool. In fact, being right was treasonous. If there is no free speech in the media then it does NOT represent the people. The people it DOES represent are thus criminals & communists! An explanation of the problems and where we are headin in one video;
Despotism (1946 Encyclopedia Britannica educational film)
Later, much much much later, Rachel Maddow reported on the Iraq Oil War, something the media STILL doesn't report on despite us JUST having gone through an election process when such sensational stories would generate alot of controversy and thus ratings and thus revenue. Interesting, huh?...

Part of the documentary investigating the plan to invade Iraq for oil that began many months before 9/11...

Rachel Maddow Documentary Special: "Why We Did It" - The Invasion of Iraq


Poor old Jon Stewart tried AT EVERY TURN to get the media to reveal the truth about the Iraq War but the media's "Iraq War Amnesia" was so strong that even when Jon Stewart mentioned the media's Iraq War coverup THE DAY BEFORE HE ANNOUNCED HIS RETIREMENT, the media still didn't notice. I decided to document this. Here is a summary;

Guardians of the Veracity - When a report that Brian Williams filed during the Iraq War changes suspiciously over time, the media is quick to scrutinize the longtime news anchor's credibility. (7:49):

A joke that highlights Jon Stewart decades long frustrations to the media (what prompted his retirement?)... 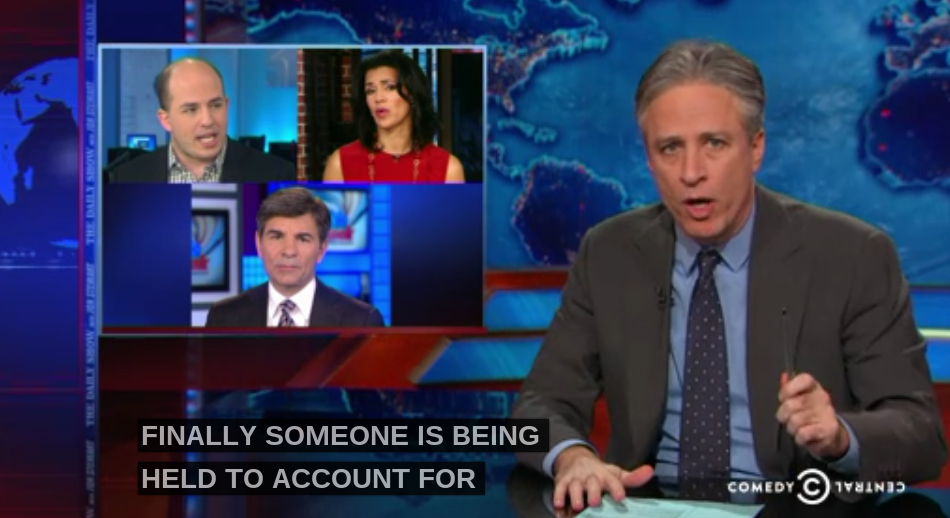 Related background info:
So Wrong for So Long: Greg Mitchell on How the Press, the Pundits — and the President — Failed on Iraq
Amanpour On Iraq: Where were the journalists?
Phil Donahue on His 2003 Firing from MSNBC, When Liberal Network Couldn’t Tolerate Antiwar Voices
Bush's Legacy: A Bill Moyers documentary exploring how mainstream media failed to question the war in Iraq 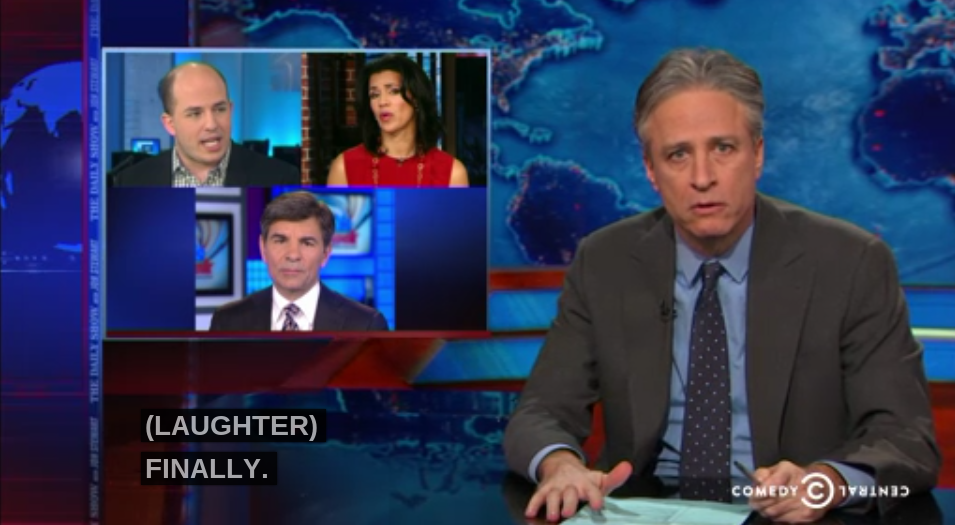 The Raw Story: Jon Stewart mocks Brian Williams, bodyslams media for pushing their own fake Iraq war stories
Daily Show host Jon Stewart led a tongue-in-cheek cheer on Monday for the media attention surrounding NBC News anchor Brian Williams’ discredited story about being targeted by enemy fire in a military helicopter.
“Finally, someone is being held to account for misleading America about the Iraq war,” Stewart said. “It might not necessarily be the first person you’d want held accountable on that list. But never again will Brian Williams mislead this great nation about being shot at in a war we probably wouldn’t have ended up in if the media had applied this level of scrutiny to the actual f*cking war.”While news outlets were busy protecting the “crown jewel” of their credibility, Stewart argued, they were all too happy to pat themselves on the back for backing then-President George W. Bush and his administration as they peddled bogus claims about weapons of mass destruction in Iraq leading up to that war.
Stewart confessed to being impressed by the “evil efficiency” of the Bush narrative for war, which included planting a story in the New York Times, and following it up with an appearance by then-Vice President Dick Cheney on Meet The Press to discuss it.
He then showed footage of NBC’s Tom Brokaw blaming the “fog of covering a war” for the lack of accountability toward Bush and Cheney, while CNN’s Wolf Blitzer shrugged off any criticism, calling his network “a first draft of history” operation.
“It wasn’t even your draft,” Stewart said. “You were just copying off of Cheney’s paper. You were plagiarizing history.”

But it didn't stop there. It happened again...

With the media frenzy over lies by Brian Williams and Bill O Reilly Jon Stewart wonders why this sort of frenzy over exposing lies hasn't hit the Iraq War story yet. God knows there is enough evidence for a hardcore public outcry.

Here is Jon Stewart Slamming The Media On the Iraq War Yet Again (in his words words); 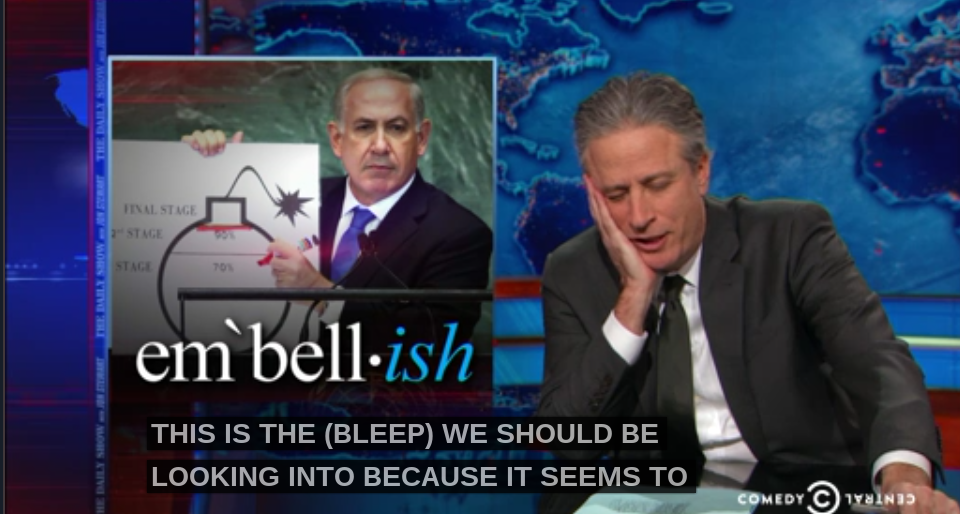 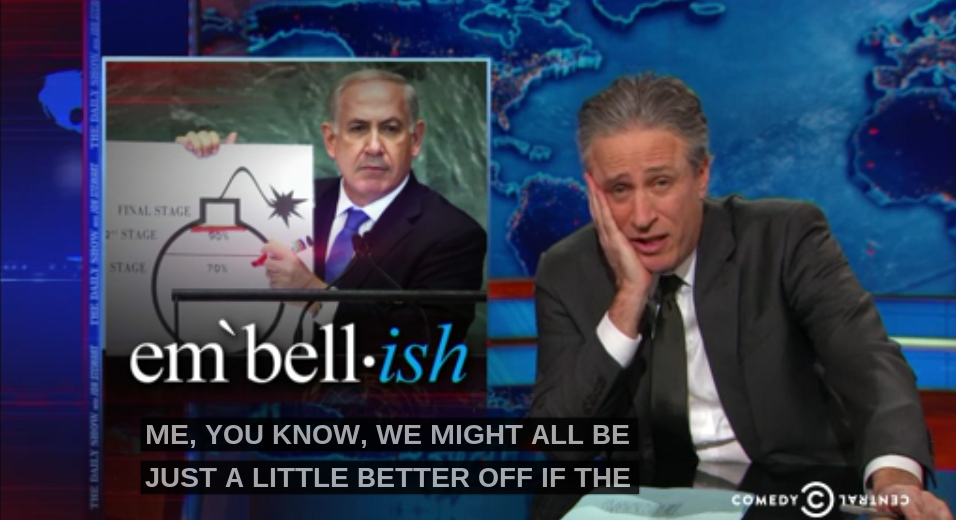 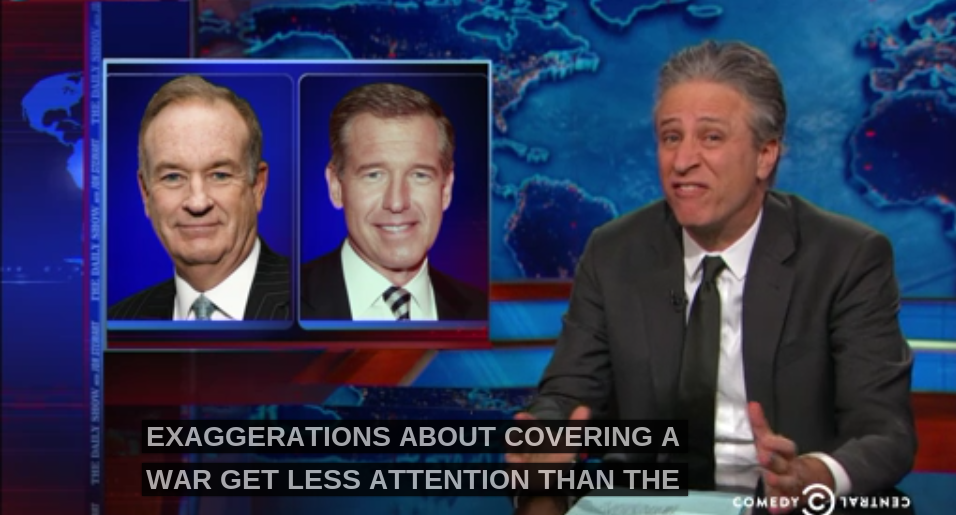 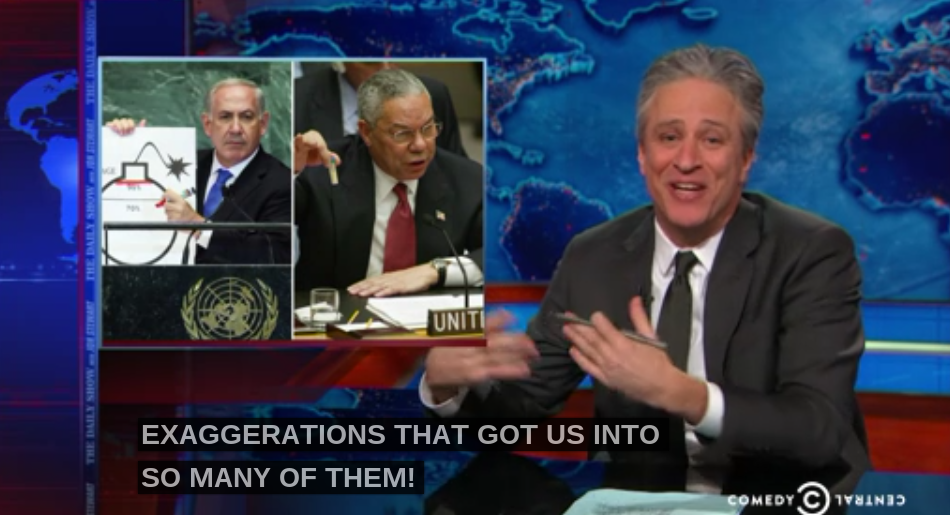 "On the day Jon Stewart announced his retirement, Rachel Maddow was the only one who could talk about him without getting creepy with lies"... is what I said back then, but even she didn't say enough (Keep in mind... the entire media ignored Jon Stewarts laments and demands for an outcry about the Iraq War and talked about Jon Stewart's retirement decision without ANY mention of what he was getting angry about in the first place... or see another way, the media completely ignored all the major issues Jon Stewart brought up RIGHT BEFORE HIS RETIREMENT. Such sensational news it would have been! So much lost in ratings! So much lost in Revenues!

Introduction To The State Of The USA Today

A list of relevant links to the Iraq War Treason/Coverup & Betrayal Of The American People's Trust;

More about  the media; 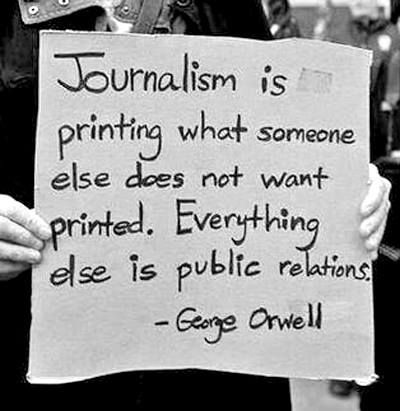