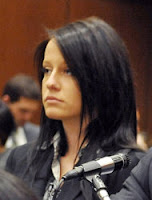 The final defendant in a group charged with Burglarizing celebrities' homes pleaded no contest Friday to receiving a jacket Stolen from Paris Hilton.

Courtney Leigh Ames entered the plea and is expected to be sentenced on Feb. 1 to three years of supervised probation and 60 days of community service.

Prosecutors dropped felony residential burglary, conspiracy to commit burglary charges and another count of receiving stolen property in exchange for the plea.

Ames, who had been charged with breaking into Hilton's home, had also been accused of wearing a necklace stolen from Lindsay Lohan's home to court.

Authorities arrested most of the group in October 2009 and accused them of a months-long crime spree that netted more than $3 million in clothes, jewelry and art from the homes of stars such as Lohan, Hilton, Orlando Bloom and Megan Fox and Brian Austin Green.

All the stars have agreed not to seek restitution for their losses.

"From day one, we always knew that Courtney was the least culpable player in this group," her attorney, Robert Schwartz, said after the hearing. "In no way am I condoning or minimizing what was done to these various celebrities, but to connect Courtney Ames with these burglaries was just false."

One of the defendants, Alexis Neiers, quickly ended her case and starred in the short-lived E! Entertainment Television reality show "Pretty Wild," which prominently featured the court case. Lifetime created a television movie inspired by the case and Oscar-winner Sofia Coppola has filmed a movie based on the burglaries and their fallout.

Coppola's film was aided by the lead investigator on the case, Los Angeles police office Brett Goodkin, who failed to disclose his paid work and appearance in the film. That became an issue in recent months and prompted Superior Court Judge Larry Paul Fidler to call Goodkin's actions "stupid" and a gift to defense attorneys, but not egregious enough to warrant an outright dismissal of the charges against Ames and two other defendants.

Schwartz said he would have attacked Goodkin's credibility and his claims that Ames had confessed, if the case had gone to trial, although he acknowledged that if Ames had been convicted of any charges she likely would have faced stiffer penalties.

Had the case against the trio gone to trial, jurors would have heard directly from one of the group's ringleaders, Nicholas Frank Prugo. The 21-year-old pleaded no contest in March to burglarizing the homes of Lohan and reality star Audrina Patridge and is scheduled be sentenced to two years in prison in in January.

A Louis Vuitton bag full of jewelry was returned to Hilton after several members of the group were arrested, but much of the stolen property hasn't been recovered.


This post first appeared on Zentertainz - Entertainment News Headlines, please read the originial post: here
People also like
Should the ends justify the means with Donald Trump?
911 Call Released After Man Shot Outside Rapper DaBaby’s NC Mansion
Best homebrew games for your A500 Mini
Hemproutine – 10% di sconto sui prodotti CBD
How Real Estate Companies Are Growing With Blockchain Technology?
Impact of Remote Work on the Real Estate Industry
With $3.6B Worth Bitcoin Recovered From The Bitfinex Hack, Is LEO On The Verge Of Entering The Top-10 List?
Creating a Relationship Contract by Vivienne Diane Neal
Famous Girls With Beard – Causes, Treatments & More