MTV was having trouble cutting the umbilical cord with a cast of Jersey Shore. Who could blame them - sure, most of them are scumbags, but the series has done an amazing number for the network. Networks have spin-offs for DJ Pauly D, Snooki and JWoww and, but still shocked fans when he announced a new talk show with Vinny, titled The Show With Vinny. 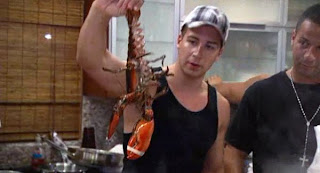 In the series, Vinny will be interviewing celebrities from his home in Staten Island, New York, and they will interact with their families, were treated to a home cooked meal from Mom Paula and some silly rambling from Uncle Nino (who is not Don Vito).
"I'm really, really excited, especially because it was something I really wanted to do it," said Vinny. "I have always been more natural in doing hosting: reading teleprompters, take direction and ask questions ... I can actually do a little."
His colleagues thought Jersey Shore Vinny will dominate the talk show scene in the same way he dominated Italian skanky women in New Jersey.
"I thought it was perfect for Vinny - he has personality and he always wants to do the hosting, so I'm very happy for him and hope to see him succeed," said Ronnie. "And everyone grew to love his family."
Vinny event aims to realness (L-O-L). Are you going to watch?