“For the sake of China’s Millions!” – Christianity in the Late Qing Dynasty (Part 1a)

“People of the Western Ocean (Europeans), should they propagate in the country the religion of the Lord of Heaven, or clandestinely print books, or collect congregations to be preached to, and thereby deceive many people, or should any Tartar or Chinese, in their turn, propagate the doctrines and clandestinely give names (as in baptism), inflaming and misleading many, if proved by authentic testimony, the head or leader shall be sentenced to immediate death by strangulations: he who propagates the religion, inflaming and deceiving the people, if the number be not large, and no names be given, shall be sentenced to strangulation after a period of imprisonment. Those who are merely hearers or followers of the doctrine, if they will not repent and recant, shall be transported to the Mohammedan cities (in Xinjiang-Turkistan) and given to be slaves to the beys and other powerful Mohammedans who are able to coerce them…All civil and military officers who may fail to detect Europeans clandestinely residing in the country within their jurisdiction, and propagating their religion, thereby deceiving the multitude, shall be delivered over to the Supreme Board and be subjected to a court of inquiry.”
(Maclay, 1861)
Under the Great Qing Legal Code (大清律例, Dà Qīng Lǜ Lì) that governed the vast empire of Qing Dynasty China, in a statute entitled “Prohibitions Concerning Sorcerers, Sorceresses and Witchcraft” (禁止师巫邪术, Jìnzhǐ Shīwū Xiéshù), was the above clause to be found. Ratified in 1811 under Emperor Jiaqing (嘉庆帝, Jiāqìng dì) (1760 – 1820), modified and enforced under Emperor Daoguang (道光帝, Dàoguāng dì) (1782 – 1850) and repealed in 1870 under Emperor Tongzhi (同治帝, Tóngzhì dì) (1856 – 1875), the above clause was made in reference to Christianity, as a drastic measure to curb the spreading of the gospel which was then viewed as a form of superstition and social ill by the Qing government. Targeting specifically Catholic Christianity at first, the law soon became enforced towards Protestant Christianity as well, which saw a rising trend in the Middle Kingdom during the 19th century.
During an era coloured by expanding Western trade and imperialism in the East, southern Chinese ports such as Hong Kong (香港, Xiānggăng), Macau (澳门, Àomén), Canton/Guangzhou (广州, Guăngzhōu) and Amoy/Xiamen (厦门, Xiàmén) saw tremendous growth in importance as China’s commercial hubs and gateways to the external world. Western powers such as the Portuguese, Dutch, French and British were increasingly engaged in trade with the Qing imperial government through these ports, which soon became centres of Western influence and culture in the Middle Kingdom. It was from these ports that knowledge of Western culture and sciences flowed into Qing China, and it was from these ports that Westerners started to acquire deeper insight into the culture and customs of China. And it was against such a backdrop that Catholic Christianity made much headway amidst the intricacies and solemnities of Chinese life under the Qing Dynasty. 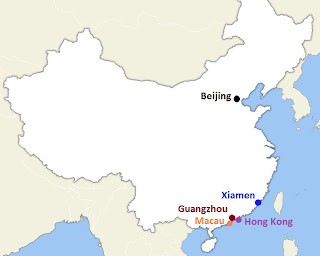 Location of the main southern Chinese ports in the 1700s and 1800s
As I’ve covered in an earlier article entitled Christianity with a Chinese Face – Late Ming & Early Qing Dynasties, Catholic Christianity was first reintroduced into Ming Dynasty China on a large scale by two prominent missionaries, namely Matteo Ricci (利玛窦, Lì Mădòu) (1552 – 1610) and Michele Ruggieri (罗明坚, Luó Míngjiān) (1543 – 1607). Under the generous auspices of the Ming Emperor Wanli (万历皇帝, Wànlì Huángdì) (1563 – 1620), Catholic Christianity made much progress not only in the southern Chinese ports, but also in the imperial capital of Beijing (北京, Běijīng) and several other cities. Matteo Ricci himself became a prominent and influential figure in the imperial capital, and the Chinese were always interested to hear what he had to say about the gospel and Western sciences. With continuous patronage from succeeding Ming and Qing emperors, missionaries who followed in Father Ricci’s footsteps, such as Johann Adam Schall von Bell (汤若望, Tāng Ruòwàng) (1591 – 1666) and Ferdinand Verbiest (南怀仁, Nán Huáirén) (1623 – 1688), were granted honours of the highest degree and wielded much influence in the imperial court and throughout the Middle Kingdom. These proved to be highly favourable for the spread of the gospel throughout China, and this status quo remained for as long as Qing Emperor Kangxi (康熙帝, Kāngxī dì) (1654 – 1722) remained on the throne. 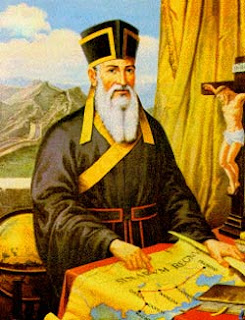 Prominent Jesuit missionary and priest to Ming China Father Matteo Ricci (利玛窦, Lì Mădòu) (1552 - 1610)
Nonetheless, the ascension of Emperor Yongzheng (雍正帝, Yōngzhèng Dì) (1678 – 1735) to the throne in 1722 marked a gradual decline for Catholic Christianity in the Middle Kingdom. Ongoing and unresolved controversies regarding Catholic Christianity and Chinese culture, combined with the lack of Jesuit (or Catholic) influence in the imperial court in Beijing eventually led to increasing bouts of persecution under both Emperor Yongzheng and his successor, Emperor Qianlong (乾隆帝, Qiánlóng Dì) (1711 – 1799), who sought to purge the gospel and everything seemingly Western from China. As a result, the 1700s and early 1800s witnessed mass killings of Catholics, confiscations of their property and deportations of Western missionaries to the then Portuguese settlement of Macau.
Despite all these, imperial policies against Catholic Christianity during the 1700s and early 1800s were erratic and frequently depended upon several factors, particularly the degree of influence of Jesuits (or Catholic missionaries in general) in the imperial court in Beijing and official sentiments against Western influences. Until the end of Emperor Kangxi’s reign in 1722, the Jesuits were the dominant Catholic missionary group that wielded the most influence and commanded the most respect in the Qing imperial court. As troubles started brewing among the Jesuits in Europe, coupled with political suppressions from European powers that culminated in their disbandment in 1773, Jesuit influence in the Qing imperial court also waned. So did the amount of persecution against Catholics in China increase proportionally. This was made worse by escalating suspicions and fears within the Qing government towards the Western powers in view of their incessant threats to Chinese territorial sovereignty. Catholic Christianity and Western missionaries were seen as agents of Western imperialism, and drastic action had to be taken to surmount these fears. 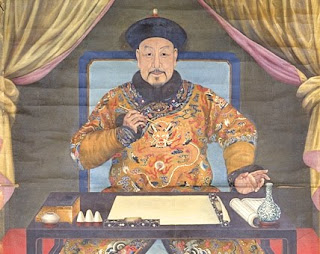 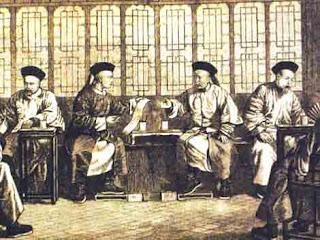 Courtiers in the Qing Dynasty
Another factor that determined the degree of official persecution against Chinese Catholics and Western missionaries was, expectedly, the distance from the imperial capital. Whenever anti-Christian edicts were issued, killings of innocent lives, harassment of property and deportation of missionaries were most vigorous in Beijing itself, followed by areas in closer proximity with it. Provinces located far away from the capital, such as Fujian (福建, Fújiàn), Guangdong (广东, Guăngdōng), Sichuan (四川, Sìchuān) and Guizhou (贵州, Guìzhōu) saw more erratic and irregular executions of the emperor’s anti-Christian orders. As a result, Catholic Christianity continued to survive and made significant progress amongst the masses in these areas, notwithstanding the increasing hostilities against Westerners and seemingly foreign influences in many parts of the empire.
Fujian Province 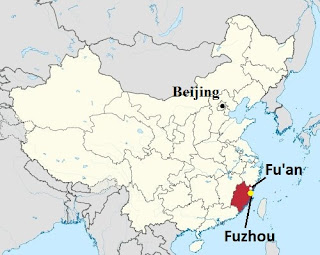 Location of Fujian Province (shaded in red) in China
Having been introduced into the southern Chinese province of Fujian since the early days of its arrival on the shores of Ming Dynasty China, Catholic Christianity had made much progress in various parts of the province, especially during the reign of the illustrious Qing Emperor Kangxi. Several localities, most notably Fuzhou (福州, Fúzhōu), Amoy/Xiamen and Fu’an (福安, Fú’ān) became centres of spread for the gospel, where large churches and Chinese Christian communities were to be found. Imperial patronage for Catholic Christianity under Emperor Kangxi meant that the propagation of the gospel met with little opposition or hindrance among the local communities. The gospel was well-received by many, and imperial protection permitted much freedom for Western missionaries and local Chinese Christians to build churches, hold Masses and organize gatherings. Catholic Christianity became so popular and well-tolerated that even non-Christian segments of the local Chinese communities willingly gave their assistance, some in finances and others in labour, to build new churches.
Things were, however, bound to change when Emperor Kangxi died in 1722, subsequently paving the way for Emperor Yongzheng to ascend the throne that same year. One of the first few changes that the new emperor swiftly implemented in the first few years of his reign was to proscribe Christianity. Orders were sent to provincial governors to confiscate local church property, compile lists of Chinese Christians, oblige them to renounce their newfound faith, and monitor strictly the activities of Western missionaries. These were carried out by local provincial authorities in Fujian, but no dire action was taken to eliminate Christianity from Chinese soil. Rather than taking strict action against Chinese Catholics and Western missionaries, the provincial authorities adopted a softer approach of merely monitoring closely Christian activities, much to the displeasure of the emperor himself. 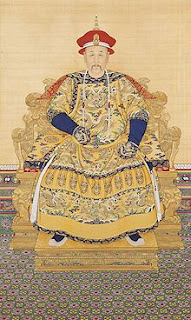 Emperor Yongzheng (雍正帝, Yōngzhèng Dì) (1678 – 1735)
Emperor Qianlong’s ascension to the throne in 1735 marked a sharper deterioration in the status of Catholic Christianity in the Middle Kingdom. Under his reign, more severe measures were applied to curb the spread of the gospel, so much so that in Fujian, several Western missionaries and Chinese church leaders were arrested and charged. While Chinese church leaders were often punished with lighter sentences such as imprisonment, Western missionaries generally received heftier sentences, often leading to execution or deportation to Macau. As Chinese Christians in the province numbered in the thousands, the provincial authorities could not possibly arrest every Christian they could lay their hands on. Instead, mass campaigns to destroy Christian literature and prayer materials were carried out, in addition to restoring and empowering local Confucian academic institutions to “re-educate” the general public.
Amidst sporadic persecutions throughout the second half of the 18th century and early 19thcentury, Catholic Christianity continued to make headway amongst the masses. Chinese Christians were trained for priesthood and leadership in the church, while the size of the Catholic community continued to grow throughout Fujian in spite of the dangers it faced. Eventually comprising even soldiers, government secretaries, influential officials and wealthy merchants, the Catholic community grew in influence and strength. Repeated attempts by provincial authorities to arrest or harass Chinese Catholics were often met with failure, either due to protection offered by sympathetic non-Christian members of society or intervention on the part of influential and powerful Catholics who were well-respected by the local officials.
Bribery also became a norm in protecting the Catholic communities. Imperial directives against Catholic Christianity were often regarded by provincial and local officials as opportunities to extort money and property from the Catholic communities without much serious intentions of purging the faith. As such, bribing the provincial and local authorities could often prevent harassment and buy peace for the local Catholic communities, besides enabling the release of Western missionaries and Chinese church leaders who were under arrest. This, of course, placed heavy financial burdens on the Catholic communities, but the occasional intervention by officials or influential figures who were Chinese Catholics themselves helped stop such extortions and harassments.
Nevertheless, the last few years that led up to the First Opium War (第一次鸦片战争, Dìyīcì Yāpiàn Zhànzhēng) in 1839 saw increasing tensions between the provincial authorities and the Catholic communities, who were increasingly perceived as agents of Western powers. False accusations from certain parties that associated Catholic Christians with secret societies and rebellious activities further aggravated the situation, consequently leading to a massive anti-Christian campaign in 1837 that left several predominantly Christian villages in Fujian ravaged and desolate. It was not until the subsequent signing of the unequal treaties between the British and the Qing Dynasty (which I will be covering later) that peace and tolerance for Western missionaries and Christian communities were once again restored in Fujian, as in other provinces as well. 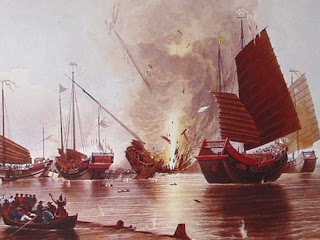 “For the sake of China’s Millions!” – Christianity in the Late Qing Dynasty (Part 1a)