Brazil's Youth See Their Future, And Her Name Is Ana Júlia

Brazil's Youth See Their Future, And Her Name Is Ana Júlia
by Shannon Sims in Forbes.
OCT 27, 2016 @ 12:53 PM
It has 42,908 VIEWS till now. I thank Shannon Sims to tell the world a little bit of what is happening in Brazil. As always with the help of US.

How Universal Basic Income Gets Attra…
A Brief Questioning-Meditating on the…
Portuguese Arraiolos Rugs
500 One Word Substitution Book PDF Fr…
John Mcafee: I’m not an anarchist, I’… 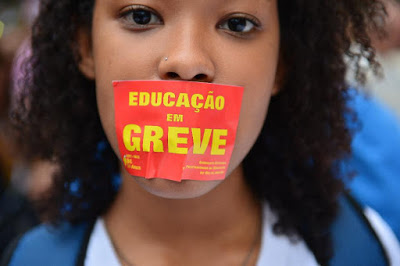 A girl bears a sticker in her mouth reading ‘Education on strike’ during a teachers protest demanding better working conditions and against police beating, on October 7, 2013 in Rio de Janeiro, one of the events that laid the road for Ana Julia’s speech yesterday. (YASUYOSHI CHIBA/AFP/Getty Images)

The news out of Brazil tends to be rough. Political turmoil. Corruption scandals. Arrests. Rapes. Deaths. Outrage. It can be exhausting to cover Brazil as a journalist; imagine how exhausting it must be to live Brazil as a Brazilian.

But today, good news, from an unlikely place. Over the past 24 hours, Brazil has become acquainted with what many Brazilians believe is the most promising voice it has heard in years. And remarkably, it is the voice of a 16-year-old girl named Ana Júlia Ribeiro.

In a video that has gone viral on Brazilian social media, Ana Júlia (Brazilian custom refers to people by their first name) addressed the legislative assembly of the state of Paraná yesterday.

Below, the video, which is in rapid-fire Portuguese. And below the video, an explanation in English of what is happening.

So what’s going on here? Ana Júlia is addressing the government leaders of the state of Paraná about the escalating crisis that has gripped many – over 1,000 – of the country’s schools. With a thick Paraná accent, she begins her speech with a question that has already been quoted repeatedly on Brazilian social media: “Who is school for?” She goes on to answer her rhetorical question by explaining why she believes the movement occupying schools – which is ideologically associated with the left-wing – is legal and legitimate.

She invites the politicians present to visit the occupied schools and says it is “an insult” that the students occupying the schools have been called “doctrinated,” which in Brazil carries the meaning of mindless dedication to a cause. With startling honesty, she admits that it is challenging for young students to be able to digest all of the politics and policies presented in the media and to then determine whether they will favor or counter them. “It is a difficult process, it is not easy for students to simply decide what to fight for. But still we’re lifting up our heads and confronting this.”

She proclaims, “Our flag is education, our only flag is education,” and argues that the controversial government program “escola sem partido” or “schools without political parties,” which forbids political discourse in the classroom, insults students by telling them that they don’t have the capacity to think for themselves. She adds, “Only, we do.”

In the Brazilian state of Paraná, the educational crisis is particularly acute. Presently, 850 schools are occupied across the small state. And the issue of education and protests in Paraná has a difficult history. It was in Curitiba, the capital of Paraná, that about a year ago public school teachers filled the streets in protest of changes to their pension plans. Their protest was met with violence from the state, and over 100 teachers were injured. Scenes of teachers being beaten by police sent shockwaves around the country and laid the groundwork for Ana Júlia’s address yesterday.

Now, another tragic scene echoes those protests. On Monday, a student named Lucas Mota, was killed inside one of the occupied schools in Paraná. He was found with knife wounds to his chest, reportedly caused by another student after an argument over drugs. On the one hand, his death reaffirmed the position of those opposing the occupy schools movement that the students involved are trouble-makers taking advantage of the state. At the same time, Mota’s death has added fuel to the occupy movement, which was previously a protest that fell more under the umbrella of a protest over government policies, but that increasingly has become, for its supporters, a protest about human rights. Or, more specifically, students’ rights. And now carrying that umbrella, with a shaking voice that belies a firm determination, is young Ana Júlia.

At the most dramatic moment in her address to the assembly, Ana Júlia brings up Mota’s death. “I was at Lucas’ wake yesterday, and I didn’t recognize any of your faces there,” she says to the wide-eyed politicians in the assembly. “You all represent the state, and so I invite you to look at your hands. Your hands are dirty with the blood of Lucas. Not just of Lucas but of all the adolescents and students that are victims of this.”

At this moment in her speech, the hall erupts in applause from those attending the session in the rafters, and shouts from the politicians on the floor. “My hands aren’t dirty!” one politician counters. The president of the assembly, Ademar Traiano, who represents a centrist-right party, interrupts the session at this point and threatens to close the session entirely. “You can’t attack parliamentarians here,” he says angrily to Ana Júlia, over the boos of the crowd. “Here no one has hands stained with blood,” he adds.

It is a powerplay that would make most of us cower – an esteemed politician shutting down a speaker’s claim – and it is in this moment that Ana Júlia’s star shines brightest. The young teenager doesn’t try to shout over the president of the session, she doesn’t disrespect him or engage in an argument. Instead, she steels herself and calmly issues the most scathing critique at all. “I apologize, but the Statute of the Child and Adolescent tells us that the responsibility for our adolescents ­– our students – lies with society, the family, and the state.” The word “state” lands like a mic drop in the session.

To be sure, Ana Júlia is taking a a political position. She is against Temer’s recent push to tighten up the education system by forbidding political discourse within the classroom and by freezing the system’s expenditures. As seen in the most recent municipal elections, many – and quite possibly most – Brazilians are likely to disagree with Ana Júlia.

But what makes Ana Júlia’s speech rare and share-worthy is that while she represents a political opinion that many do not agree with, the way she carries herself is so self-possessed and even-keeled that it has drawn the respect of even Brazilians who might disagree with her position. She doesn’t read from a script, but instead she bobs and weaves through laws and constitutional amendments like an established scholar giving a university lecture. The fact that she is only 16 is what turns her into an instant beacon of political promise for those who support her position.

And that’s why suddenly, across the Brazilian digital waves, there is a resounding chorus: “Ana Júlia me representa!,” or, “Ana Júlia represents me!”

This moment in which Ana Júlia stars is a heavy one. The latest round of municipal elections was a rout for the leftists of Brazil. Cities that were once led by bike-riding progressives, as in the case of São Paulo, booted those politicians from office and voted in centrist-right leaders last month.

It was a sea change election that echoed what is going on at the federal level in Brazil, where the leftist Dilma Rousseff has been impeached from office, and the centrist-right Michel Temer has taken over, vowing to unravel many of the leftist policies that have steered the country over the past 13 years.

Temer – who is 76 years old and could be Ana Júlia’s grandfather – has made quick work of this promise. One of the key targets of his reform efforts has been Brazil’s education system. This week, a controversial Constitutional amendment, called the PEC 241, passed through lower house of Congress on Tuesday. The new amendment would put a ceiling on government funding for education and puts a 20-year freeze on educational expenditures.


The amendment’s advocates believe this type of belt-tightening is required in order to get the country’s stalled economy moving again and to protect that process from political tampering over the next two decades. Critics of the proposal believe that the 20-year freeze is draconian in its impact (one study shows it could pull $8 billion out of the education system per year) and point out that educational expenditures are being frozen at the same time that government salaries are being raised. Next week, the Brazilian Senate will begin debating the amendment.

In the Forbe's article there are pictures.

Brazil's Youth See Their Future, And Her Name Is Ana Júlia