Arya’s first Malayalam Film is going to be ‘Urumi’ and he has got that film by replacing Vikram. Santosh Sivan's trilingual film ‘Urumi’ is a multi-starrer and a host of popular names either feature in full length roles or in special appearances.

Karen S. Wiesner, Tension and Twists,…
Concert Film Review: The Rolling Ston…
Meow Bar, Moscow
Day 4 – How to Rehab a Painful Should…
Top 10 Biggest Blackjack Jackpots
It will be Arya's first Malayalam Film. The buzz is that he has replaced Vikram who had earlier promised to do the cameo, but at the last moment could not adjust his dates. Prithviraj and Genelia head the cast with big names like Prabhu Deva, Nithya Menon, Amol Gupte, Jagathy Sreekumar playing important characters. 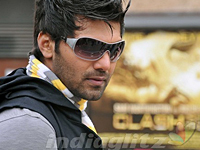 Tabu and Vidya Balan play cameos and now Arya is joining them. Arya will join in the second schedule Shooting of ‘Urumi’ happening in Mangalore and Udupi. He has given three days to complete his portion and will fly to Mangalore from Theni from where he is shooting for Bala’s ‘Avan Ivan’.