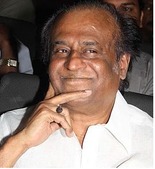 Superstar RajiniKanth ruled the indian film industry this year with his Magmum-Opus "Endhiran"(Robot in Hindi). It has got a long time for the audience to come out of Endhiran Mania. The Movie has got a amazing response all over the world. The super star is also acting in the 3d animated movie "Raana" which was called as Sultan the warrior . This movie is being directed by the Superstar's daughter Soundarya Rajinikanth. Other Than "Raana" , there is a exciting news that Thalaivar Rajini is going to Act in a Kannada movie.

Director Prem's next flick in Kannada is "Joggaiya". This movie is Shivaraj kumar's 100th film in his career. The most exciting news is that Superstar RajiniKanth will do a Cameo-appearance in this movie. Rajini who has got special regards on rajkumar Family , has already had a plan of working together with Shivaraj Kumar. And also the superstar has admired the movies that was directed by Prem.

When the director approached him for the Guest role in this movie , Rajini without saying no accepted the offer . The director has kept a suspense on the appearance of Shivaraj and Rajinikanth's Role. It is said that superstar though playing a guest role , has a powerful scenes in the movie.
The other pre-production works are under process and the film is expected to release on april month . The Kannada Movie audience are excited with Rajini's return to Kannada films.