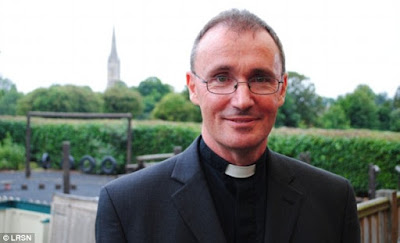 The Bishop of Grantham has become the first in the Church of England to declare that he is in a gay relationship.

Nicholas Chamberlain, 52, has been with his partner for many years and added that they are in a 'faithful' and 'loving' relationship.

He was ordained last year by the Archbishop of Canterbury, Justin Welby, 60, who added that he was aware about his sexuality.

Bishop Chamberlain made the disclosure when he spoke to the Guardian and added that he didn't want to make 'a big thing' about coming out. 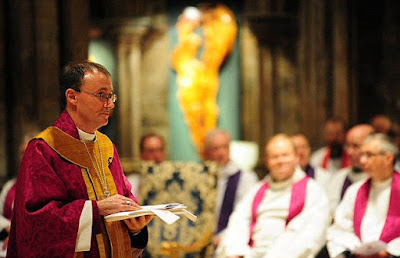 He was made suffragan in the Lincoln diocese in 2015 and obeys Church guidelines which say gay clergy must remain celibate and not marry.

The bishop told the newspaper: 'It was not my decision to make a big thing about coming out.

'People know I'm gay, but it's not the first thing I'd say to anyone. Sexuality is part of who I am, but it's my ministry that I want to focus on.'

He said that both he and his partner 'enjoy each other's company' and 'share each other's life' during their 'faithful' and 'loving' relationship.

The bishop divulged the personal information after learning that details about his private life were going to be revealed by an unnamed Sunday newspaper.

He added: 'I hope I'll be able to be a standard-bearer for all people as a gay man.

'And I really hope that I'll be able to help us move on beyond matters of sexuality.'

His appointment was made by Christopher Lowson, the bishop of Lincoln, who said that he is 'satisfied' Bishop Chamberlain 'lives by' the House of Bishops' guidance on issues in human sexuality.

In a letter to parishes in his diocese, Lowson said: 'I am satisfied now, as I was at the time of his appointment, that Bishop Chamberlain fully understands, and lives by, the House of Bishops' guidance on issues in human sexuality.

'For me, and for those who assisted in his appointment, the fact that Bishop Nicholas is gay is not, and has never been, a determining factor.' 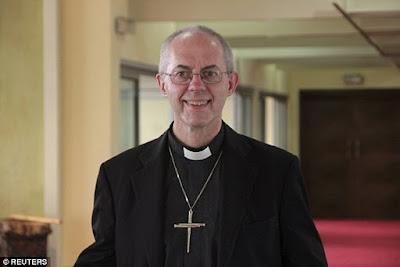 Welby told the newspaper: 'His appointment as Bishop of Grantham was made on the basis of his skills and calling to serve the church in the Diocese of Lincoln.

'He lives within the Bishops' guidelines and his sexuality is completely irrelevant to his office.'

A Church of England spokesman said: 'Nicholas has not misled anyone and has been open and truthful if asked.

'The matter is not secret, although it is private as is the case with all partnerships/relationships.'

'It was not my decision to make a big thing about coming out'
The Bishop of Grantham
It is believed that he has become the first bishop to reveal that they are a homosexual.

In 1995, Lord Hope, the former archbishop of York, said his sexuality was a 'grey area'.

Bishop Chamberlain was born and Staines, Surrey, and was educated at Christleton High School on the outskirts of Chester.

As a keen runner, he regularly takes part in half-marathons in a bid to raise money for charities including Christian Aid.

His announcement is likely to cause further tension among Anglican members of the Church who recently encouraged all bishops to abide by biblical teaching on sexuality.

The C of E has been divided over the topic of sexuality and a heated debate has been launched over whether it can continue holding the belief that marriage is solely the union of a man and a woman.