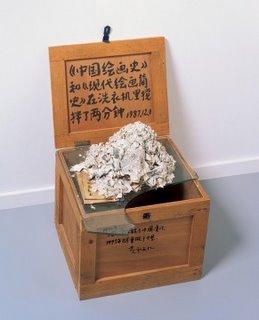 The History of Chinese Painting and The History of Modern Western Art, Washed in the Washing Machine for Two Minutes (on your left), by Huang Yong Ping, is always a crowd pleaser in the classroom.


While it brings out some points for discussion from students, it also helps to articulate Huang Yong Ping's (HYP) own status, straddling both China (which he left in 1989) and Europe/US (where he is much loved in the art world).

In the latest Art in America, Eleanor Heartney has written a clear essay, I think, about his retrospective at the Walker in Minneapolis, now at MASS MoCa.

And I am struck by a couple of things:
-the first is that I - and many other designated 'non-western' art historians - often lament the fact that we are expected to have a knowledge of western art as an a priori given, despite the fact that it is not our focus of study. "Western" art historians, on the other hand, are not assumed to have knowledge of India, China. etc....
And yet here is an artist who uses his extensive knowledge of western art history (find overt references to John Cage, Duchamp, da Vinci, the Euro "avant-garde") AND Chinese art histories in Taoism, Buddhism, Zen - as well as Chinese arts collectives like Xiamen Dada) - and uses it all to tremendous effect without placing these two intellectual locations at odds with, or in resistance to, each other.

In fact, he made me want to learn more about Western European art so that I could better decipher his references - and that is no mean feat for a Chinese contemporary artist.

In any case, I can't help but wondering if us non-westernists can make better use of our world-straddling positions and force more dialogue across the proverbial art historical chasm. Finding probably - more similarity than difference.
I was at a dissertation writing seminar a couple of years ago and came away totally frustrated because I was the only non-western person, and thus to my mind, my work had a hard time being understood and connecting with the others in the seminar. There was a real dissonance there that, instead of trying to get to the bottom of it, we all just swept it under the carpet - including moi. But I wonder if there is some sign there - that I'm not doing enough to see beyond my little frame....??

-The other point I had about this exhibition was what Heartney describes as its Wunderkammer qualities. There are taxidermied animals a la Museum of Nat. Hist; divination tools; live reptiles; part of a reconstructed airplane, etc....in short, all the mismatched displaying of a cabinet of curiousities. And I realize (where have I been, you might ask??) that artists are moving away from the in-your-face critique of the museum space (Andrea Fraser, Fred Wilson), and HYP brilliantly seems to use the critique as a legitimate frame for his show, without being guilty or underminded for actually holding the show in a museum space!

If all that seems a bit mishmashed at the moment, it's because I am currently running late and waiting for a shuttle to take me to the airport. More later.....


This post first appeared on Moksha, please read the originial post: here
People also like
Boîte créative Origami 2
Urban, Suburban, or Rural Practice: Pros and Cons
How To Make A DIY Nature Mandala Craft
Trivial Proof of the Collatz Conjecture
Brave front: thought-provoking art on England’s south-east coast
Abstract Art: What Is So Special About It?
Best Gaming PC Build Under Rs. 35,000 – May 2021
10 of the best places to see outdoor art in the UK