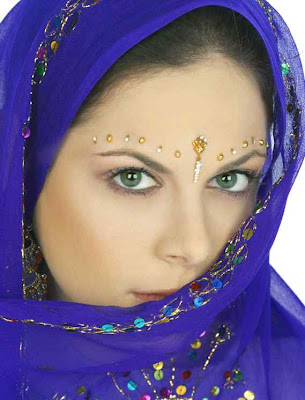 When the bindi is properly marked, it becomes the central point of the base of the creation. It is a symbol of auspiciousness, good fortune and festivity. The very positioning of the bindi shows its significance. The area between the eyebrows is said to be the seat of latent wisdom. In Hindu mythology, this area is known as the "Agna" (6th chakra) meaning "command". It controls various levels of concentration attained through meditation or Dhyana. The central point of this area is the "Bindu" wherein all experience is gathered in total concentration. Tantric tradition proclaims that during meditation, the "kundalini" - the latent energy that lies at the base of the spine is awakened and rises to the point of sahasrara (7th chakra) situated at top of the head or brain. The central point, the bindhu, becomes a possible outlet for this potent energy. It is believed that the red kumkum is applied between the eyebrows to retain and channelise this energy in the human body. In previous times both Indian men and women used to wear fragrant garlands as a part of the evening dress. This custom was followed by a practice of painting the forehead with a bindi or tilaka known as ‘Visesakachhedya’. Leafy bindis, known as other names such as ‘Patrachhedya’, ‘Patralekha’, ‘Patrabhanga’, or ‘Patramanjari’, were also pasted on the neck, palm, chin, breast and other parts of the body, decorated by sandal paste and other herbal natural ingredients.

Myths and Significance: The vermilion, used to make traditional bindis, is called ‘sindoor or ‘sindoora’ in red color, representing Shakti or strength.

Bindi also symbolises love; the red dot on the forehead gives a special charm to a woman’s face that attracts her lover. Sindoor and yellow turmeric are kept in temples and during major celebrations. This calms the intellect and is very special in temples dedicated to Hindu Gods Shakti, Lakshmi and Vishnu.Sindoor in Scriptures: The significance of ‘Sindoor’ and ‘kumkum’ differs on different occasions. The practice of placing kumkum on foreheads has been given much importance in Puranas (ancient texts) like Lalitha Sahasranamam and Soundarya Lahhari. Value of kumkum is emphasized upon in Indian religious texts, epics, scriptures etc…In legends Radha, the sweetheart of Lord Krishna, is seen turning her bindi on her forehead into a flame-like design and Draupadi, wife of Pandavas removing her bindi from her forehead in sorrow and disappointment in the epic Mahabharata. Red bindi is associated with the ancient ritual of offering blood sacrifices to please Gods. An ancient Aryan bridegroom used to make a bindi on the bride’s forehead on wedding day. When an Indian woman loses her husband, she stops wearing kumkum, the mark of marriage. When there is a death in the family the women of the house do not wear bindi, as an indication of mourning. As Bindi is a tradation of Indians so India has the most of Bindi Manufacturers & Body Dots Manufacturers


This post first appeared on Promotional Tattoos - Innovative Promotional Tool, please read the originial post: here
People also like
11 things to do on vacation with out the kids
How To Invest in Real Estate With no Money in 2023
Monetizing Hobby Through Online Courses
Creating a Sustainable Fitness Routine
Why you should journal regularly
Epoxy Coated Garage Floors
React JS, Node JS & Angular JS: Which One is The Best For Web Development?
How to bladder cancer immunotherapy
MRS THATCHER’S DREAM
X-Ray tube repair & common causes of tube failure
8 Things You Didn’t Know About Video Marketing For E-Commerce
Ladies Lace Pajamas Cross-border Lace Homewear
Muslim Woman